The Hardest Working Man in Hockey

One man's trip to Vancouver. First, a stop at a shopping mall...

"A downtown department store in a major Canadian city is bound to be a madhouse during the holiday shopping season. But it is nothing compared to a public appearance by Alexander Ovechkin, the Washington Capitals superstar and the worldwide face of hockey."

"Ovechkin spent part of his morning signing construction helmets for workers waiting for coffee at Starbucks."

When asked at The Bay at his signing sessions why he would do this, he responded...

"Why not? It's good stuff for me. People are going to recognize me and shake my hand. It's easy."

Oh, and he has a game tonight, too. If he starts kissing babies, he could run for office.
Posted by The Peerless at 1:35 PM 1 comment:

Putting the Offense in Defense 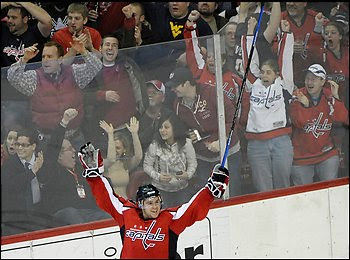 The Washington Capitals are the top-scoring team in the league heading into tonight’s play, averaging 3.56 goals-per-game, a pace (292 goals) that would put them 30-goals ahead of the second-place San Jose Sharks (262) by season’s end.

The difference is that whereas the Sharks get considerable contributions on offense from their defense, the Caps do not, especially once you get past Mike Green. Here are the NHL clubs’ defense corps (all who have dressed as defensemen) and their total points for the year, ranked by points:

Those Sharks are up there in the points rankings (notably, so are the Penguins and Blackhawks – two other teams the Caps might face down the road), but there the Caps sit in 14th place in scoring by defensemen. It doesn’t really get better looking at goal contributions. The Caps rank in the bottom third in the league in goals scored by defensemen, and considering that Mike Green has half of those, it points to a lack of contribution by the blue line…

It does get better for the Caps in terms of helpers, though. But even here, while the Caps are ranked tied for ninth in assists by defensemen, it seems a low product for the highest overall scoring team in the NHL (and there are those Sharks, Penguins, and Blackhawks near the top of that list again)…

You could reason all this away if you could demonstrate that the Caps’ defensemen get a lot of shots on net that others can pounce on for rebound scores. But here, too, the Caps rank in the middle of the pack. The odd thing, though is that a team like Pittsburgh has a comparable number of shots, but has more points contributions from its defense…

Finally, if you drill into the individual numbers to see how balanced – or imbalanced – defenseman scoring might be, you see an expected result. Mike Green accounts for a larger share of points by defensemen for his team than the high scorer among blueliners for any other club… 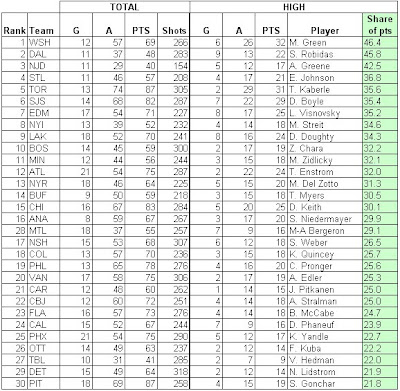 Yes, Mike Green is the highest scoring defenseman in the league, but the other side of that coin is that Green is the only Capital defenseman in double digits in points. When the Caps take the ice tonight in Vancouver, the second leading scorer among defensemen will be Jeff Schultz (1-6-7 in 27 games).

Have injuries contributed to that result? Yes; the Caps have dressed ten defensemen this year (not including the odd turn Brooks Laich might have taken on the blue line), and Green is the only Caps defenseman to have played in at least 30 games. On the other hand, Pittsburgh has dressed 12 defensemen this year, and only two of them have played in at least 30 games.

On a team as talented and productive at the offensive end as the Capitals, this could be fairly seen as nit-picking, but the margins between winning and losing in the regular season are much larger than in the playoffs, when the slightest differences can be exploited. On a team where the defense – save for one outsized talent – doesn’t make much of an offensive contribution, and on a team that relies on offense to boot, will the Caps be an easier team to defend for the more talented teams they will face in the playoffs?
Posted by The Peerless at 12:15 PM 3 comments:

The Peerless Prognosticator is ON THE AIR!!! -- Caps vs. Canucks, December 18th

Well, the Caps are about as far away as one can get from Washington and still be in the National Hockey League, as the team representing the District of Columbia travels 2,358 miles (that would be 3,795 kilometres for those north of the border) to Vancouver, British Columbia. The Caps haven’t been to Vancouver in a while, and…

“Well, that’s it. Ratings are down, and we’re cutting back on categories.”

“The answer…’I’m a record company.”

Isn’t there a bell or a buzzer?

“Like I said, we’re cutting back… you’re the only contestant.”

“That is correct…it’s your board, Peerless.”

“I’m a mountain in Alberta.”

“Your answer must be in the form of a question…”

“Correct!... still your board, Peerless…”

What is, “I’m Columbia?” (that's a road in Arlington, VA, thing for those out of town readers)

“Correct again. You’re on quite a roll, Peerless… please select…”

“I’m the oldest Spanish restaurant in the United States.”

“Right again, and that completes the board. Would you like to try for double-jeopardy?"

The Caps put their best-in-the-league record in jeopardy tonight against the Canucks at General Motors Place. After starting the year muddling along in their first 20 games with a 10-10-0 record, the Canucks are 9-5-0 in their last 14. If there is one thing that reflects their reversal of fortune, it is their rediscovery of more consistent defense and goaltending. In those first 20 games they had a respectable goals against average of 2.75, but they also allowed at least five goals six times. In 14 games since, Vancouver has a goals against average of 2.36 and allowed as many as five goals in a game only once. The overall numbers going into last night’s games look like this… 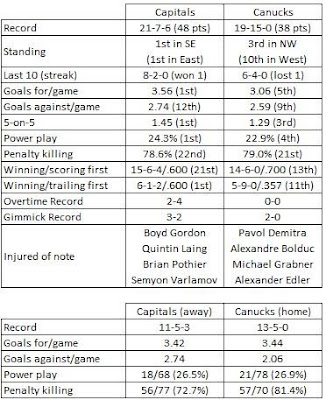 As if it needs repeating, the Canucks employ the Brothers Sedin – Henrik and Daniel – who are very much twins…

Vancouver is one of those rare teams whose leading scorer has more points than the Caps’ leading scorer (H. Sedin has 43 points to Nicklas Backstrom’s 39), but Vancouver has five other players with at least 20 points. In addition to D. Sedin’s 20 points, the Canucks include Ryan Kesler, Alexandre Burrows (huh… an “Alexandre” who can score at the NHL level; whodathunkit?), Mason Raymond, and Mikael Samuelsson in the 20-point club. These might not be household names to Caps fans, which is undersrtandable, given that they play out west, face the Caps infrequently, and combined they are 0-3-3 in 20 career man-games against the Caps.

What Vancouver does get that the Caps do not is some balanced offensive input from the blue line. Mike Green might be 6-26-32 for the Caps, but Alexander Edler (2-17-19), Christian Ehrhoff (7-11-18), and Kevin Bieksa (1-14-15) provide some punch. By way of comparison, with Brian Pothier out for the Caps, Jeff Schultz is the second leading point-getter from the blue line (1-6-7).

In goal, the Caps get to face an old nemesis – Roberto Luongo. The big netminder missed six games with fractured ribs earlier in the year (certainly contributing to that funky goals-allowed trend early for the Canucks), but he still has a 2.41 GAA and a .917 save percentage to go with his 15-11-0 record in 27 games. Since his return on November 10th, luongo is 9-5-0 in 15 appearances with a 2.13 GAA and a .928 save percentage. He has allowed more than three goals only once in those last 15 appearances. Worse, he is 15-10-3, 2.26, .930, with two shutouts against the Caps in his career. Since the lockout, he is 9-1-0 against the Caps, but seven of those wins came in the 2005-2006 season when he was with Florida.

The Peerless’ Players to Ponder…

Kesler is known as something of a defensive specialist for the Canucks – he was a Selke Trophy finalist last season. But he also has some pop, as witnessed by his 26 goals and 59 points last year. Since November 1st he is 4-14-18 in 20 games. In four career games against the Caps, though, he has only an assist and is a minus-1.

Morrison spent seven-plus seasons in Vancouver, recording 136 goals and 393 points along the way. Since then, he has a goal in two games against his former team. He broke a four-game pointless streak with an assist in the Caps’ 6-1 win at Colorado on Tuesday, but he hasn’t had a goal since December 3rd. The six-game streak without a goal ties his season high.

1. Similar doesn’t mean “same.” These clubs are similar in many ways. They are highly ranked offensive teams, they are similarly middle-of-the-pack in goals allowed, they are similarly tough at 5-on-5, both struggle on the penalty kill. But in just about all respects, the similarities give way to the Caps being statistically superior. If both teams play their game, the Caps are better.

2. Don’t let “Luongo” end with a “O”…make it a “luong” night for him. By current NHL standards, Roberto Luongo doesn’t face a ton of shots – 29.0 per 60 minutes of play. Compared to some of the loads he was bearing in Florida, that workload is like a night off. But oddly enough, since he returned from injury, he is 5-1 in games where he faces more than 30 shots. The Caps average 32.1 a game. It might not be a case of ramping up the volume on Luongo as much as it is from where they get their opportunities. Watch to see how well the Caps crowd him and make him work to find shooters.

3. Nicky Time. Nicklas Backstrom has no points against the Canucks in two career games – a small sample. But he’s coming into this game with a pair of points in each of his last three games. He is 7-9-16 in his last nine games, and he hasn’t had a “minus” game in more than a month (November 17th, minus-1 against the Rangers).

In the end, it’s going to come down to the same thing it has in a lot of games on this side of the continent – can the Caps solve Luongo? In just about every other respect, the Caps are the better team, but Luongo has had uncommon success against the club. Nevertheless, we’ll take “Caps for the win,” Alex…