The Peerless Prognosticator is ON THE AIR!!! -- Game 46: Capitals at Devils, January 18th

The Washington Capitals return from their bye week on Thursday night when they visit the New Jersey Devils at Prudential Center in Newark. The Caps will be looking to sustain the momentum they built steadily and persistently since they got off to a sluggish 5-6-1 start to the season. As the Caps take up their schedule once more, Caps fans might keep in mind that since November 1st, the Caps have the best record, not in the division, not in the conference, not in the Eastern time zone, not among teams with red jerseys, but in the entire league (23-8-2/48 points), two points ahead of the Nashville Predators (21-7-4/46 points).

Meanwhile, the Devils have been trying to recapture the magic that propelled them to a 22-9-5 start to the season before they stumbled into a six-game losing streak (0-3-3, one of those losses in regulation at the hands of the Caps, 5-2, on December 30th) that ended on Tuesday night with a 4-1 win over the New York Islanders in Brooklyn.

Even with that win over the Islanders, the Devils have had, well, a Devil of a time keeping pucks out of their own net. In their 1-3-3 run of late, they allowed 25 goals (3.57 per game). And that brings us to the question, “what’s wrong with Cory Schneider?” In that seven-game stretch, Schneider took five starts in goal and posted an 0-3-2, 4.13, .868 record. Of 48 goaltenders appearing in at least 100 minutes since that stretch of games started on December 29th, Schneider’s goals-against average ranks 43rd, and his save percentage ranks 45th. It is a stunning reversal of fortune for Schneider, who from December 12 through December 27th went 6-0-1, 1.83, .937. In that span he did not allow more than three goals in any game and only allowed as many as three twice. Compare that to his 0-3-2 record of late, one in which he has not allowed fewer than four goals in any game and did not have a save percentage as high as .900 in any of them. Schneider was scratched in the game against the Islanders on Tuesday due to illness (Keith Kinkaid got the start and the win), so it is not clear whether he will get the call against the Caps. In 14 appearances against Washington, Schneider is 3-8-2 (one no-decision), 2.50, .912, with one shutout.

Six rookies have hit the 30-point mark this season. With his next point, Jesper Bratt will join that group. As it is, Bratt is the Devils’ second-leading overall point-getter this season, behind Hall (11-18-29). Those 29 points put him on a pace to finish with 56 points this season, which would put him in the top-five rookie scorers in franchise history, trailing only Scott Gomez (70 points in 1999-2000), Kevin Todd (63 points in 1991-1992), Barry Beck (60 points with the Colorado Rockies in 1977-1978), and Paul Gardner (59 points with the Rockies in 1976-1977). He has been more consistent with the passage of time as well. Over his last 22 games since November 20th, he has not gone more than two consecutive games without a point and is 6-10-16, plus-2 over that span. He has yet to record a point in either of his appearances this season against the Caps, his only career appearances to date. 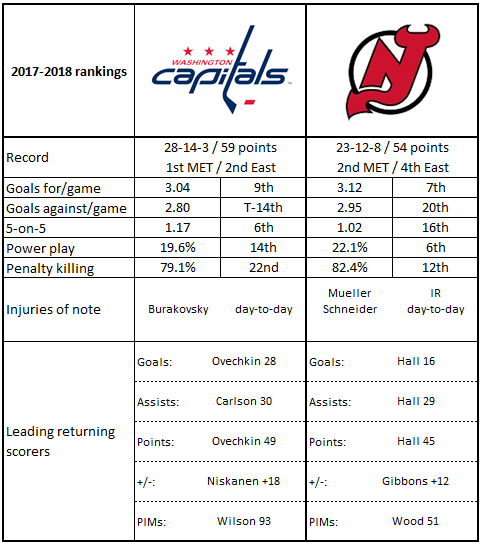 1.  Special teams have a certain “Jekyll and Hyde” quality to them in the Devils’ 1-3-3 slide. The power play has been very efficient, going 7-for-26 over those seven games (26.9 percent). The penalty kill, however, is a meager 14-for-20 (70.0) percent, all but wiping out the advantage the power play provided (the Devils have scored and allowed a shorthanded goal over those seven games).

3.  Scoring, possession, or something else, but the Devils have fewer blocked shots on home ice this season (258) than any team in the league except Buffalo (248).

4.  Only seven teams in the league have faceoff winning percentages under 50 percent on home ice. New Jersey is one of them, their 47.0 win rate being second lowest in the league (Colorado: 46.7 percent).

5.  New Jersey is not an especially efficient possession team on home ice. Their shot attempts-for percentage of 48.88 percent overall ranks 21st, but in tied situations they are at 47.32 percent (26th) and when behind are at 51.53 percent (28th).

1.  As noted, the Caps have the best record in the league since November 1st. Darned if we can figure out how they’ve done it. Not with special teams, their power play at 18.8 percent over that span (16th) and their penalty kill at 80.4 percent (19th).

2.  They’re not doing it by making goalies work, either. Their 951 shots on goal in 33 games is the fifth-lowest shot total overall over that span.

3.  They haven’t done it by avoiding the penalty box. In those 33 games the Caps have 301 penalty minutes, eighth-most in the league since November 1st.

4.  They haven’t done it by dominating possession, either. They rank 22nd in shot attempts-for percentage overall (48.23), although they are ranked 14th in SAT when behind in games (53.73 percent).

When Andy Greene takes the ice on Thursday night, he will do so for the 750th time as a New Jersey Devil, the 11th player in franchise history to hit that mark in games played. He will be the fourth defenseman to do it, joining Ken Daneyko, Scott Stevens, and Scott Niedermayer, which wouldn’t be a bad top-three on an all-time Devils lineup. Greene has not assembled such a career as a dominating defenseman in the offensive end, although he does rank sixth in franchise history in goals scored by a defenseman (41) and sixth in points (206), themselves perhaps a tribute to his longevity. Nor has he been an intimidating presence in the defensive end, trending to the smaller side as a defenseman (5’11/190). He has done it by being durable (he had a run of five seasons in six in which he played in every game, one that ended in 2015-2016) and smart. It has given coaches the confidence to put him on the ice for almost 22 minutes per game over his career. But while his offensive production has always been modest, the streak he has without a goal is a bit of a burden. That streak is 26 games, and counting, although he does have five assists over those 26 games, not an unusually low pace for Greene. In 38 career games against the Caps, he is 2-6-8, minus-14.

Nicklas Backstrom is just a hat trick away from 200 goals for his career. Unfortunately for Backstrom and Caps fans, three goals is his total over his last dozen games, which is actually something of an uptick in his scoring pace. He had just three goals in his first 27 games, a span that featured a 21-game streak without a goal, but he has six tallies in his last 17 contests. His overall production has been rather impressive over those 17 games with a scoring line of 6-11-17, plus-7, that features a 17.6 percent shooting percentage. That Backstrom is productive matters. The Caps are 7-1-1 in the nine games in which he scored a goal this season, and they are 19-3-1 in the 23 games in which he recorded a point. Helpers are Backstrom’s stock in trade, though, and he is reaching a threshold he could conceivably reach in this game. If he has a pair of assists he would have 570 for his career, which would tie him for 100th place on the all-time list with Frank Mahovlich and Shane Doan. Three, and he is clear into the top-100. Backstrom does have seven multi-assist games this season and recorded three in the Caps’ 5-2 win over the Devils on the Prudential Center ice sheet on October 13th. He bears watching. Backstrom is 8-25-33, plus-18, in 40 career games against the Devils.

Last year, the schedule after the bye was not kind to the Caps. The momentum they generated before their break ground to a halt after it.  That makes prognostifying a challenge. But the Caps were a team on the rise before the break, and the Devils have been on a slide in the last three weeks. We think the Caps will have learned something from last year…