The secret of blogging...

...finding a nice, quiet place from which to compose one's thoughts.* 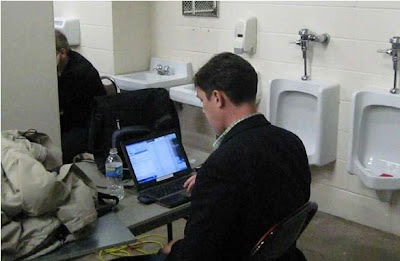 OK, let's understand up front that what we will refer to here in the next few moments is a Penguins site. That out of the way, "The Pensblog" has complied an interesing "then and now" look at hockey arenas. It is a look back across the years at the tradition-laden arenas (or out-and-out dumps) teams used to occupy and the palaces they occupy now.

The Peerless Prognosticator is ON THE AIR!!! -- Caps vs. Sabres, March 5th

15 games to go. 30 points available. Still a chance to earn 100 for the season. And it starts tonight in Buffalo.

“A little optimistic there, aren’t ya, cuz?”

Well, if it isn’t my cousin, Cheerless Prognosticator. And if Cheerless is here, then his brother, “Fearless,” can’t be too far behind. Hey guys, what brings you two here?

You guys have a blog?

Cheerless: “No, you dunce, yours…you can’t think of anything witty to write about, so you dredge us up for a visit.”

Well, yeah…but while you’re here, what’s your take on these last 15 games?

Fearless: “The Caps are set up perfectly for the stretch run…their offense is showing some spark, they’re getting decent defense and goaltending – only two games giving up more than three goals since February 1st, and their last seven games are against divisional opponents. It’s all in their hands…”

Cheerless: “Yeah, and they have butterfingers…they have consecutive wins only twice in the last six weeks, they haven’t had a three-game winning streak in the same span of time. Cristobal Huet is “questionable” for tonight. Sergei Fedorov has one point in three games since the trade…"

Fearless: “blah, blah, blah…you’d complain that a bulb on the back of the Christmas tree was out after you got a brand new bicycle for Christmas…you’ve got Alex Ovechkin breaking out of his slump with a vengeance – 4-4-8, +6 in his last three games. The old man giving up more than three goals in a game only once in more than a month – shoot, he’s given up more than two only three times in his last ten appearances (only one more time than has Marty Brodeur, by way of comparison)."

Cheerless: “and they’re still missing the captain, a top-four defenseman, and a top-six forward to injury…think any of those guys are coming back? And look at that schedule…Buffalo, Boston, Pittsburgh, Calgary…that’s 140-96-32 among them. And it’s not like the Caps are all that successful against these guys recently…2-4-5-1 against Boston in their last 12 games…2-13-0 against Buffalo in their last 15…3-9-2 against Pittsburgh in their last 14 games…”

Cheerless: “yeah, and they’ve played them as often as you buy the beer…”

OK, boys, that’s enough…we have a game to play tonight. And if you’re looking for a theme for the Caps over the next four games – that Buffalo-Boston-Pittsburgh-Calgary quartet – it’s this… 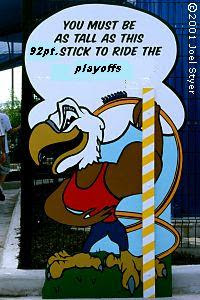 "You have to be this big to ride this ride. "

This is the test the Caps have to pass to make those last seven games with Southeast Division games mean anything. And it starts with Buffalo, a team marking time – fine if you’re in a marching band, not so much when you’re in ninth place looking up at the playoffs:

Note that last number…three one-goal games in their last ten. This isn’t a club that generally has been keeping fans on the edge of their seats late, although the games they’ve been in have been – by modern standards – free-wheeling affairs.

And therein lies the problem for the Sabres…those 36 goals allowed in their last ten games. While Buffalo, even with Daniel Briere, Chris Drury, and Brian Campbell gone, remains a dangerous offensive team, they are allowing far too many goals to think they can survive this stretch run.

Ryan Miller has been playing more like Dennis Miller, although Sabres fans probably don’t see the humor – he’s been the goalie of record in all ten games in this stretch (4-5-1), 3.95, .873. Not a great record, even if he did have the save of the week according to NHL.com.

If The Peerless was to ask, “who is Buffalo’s top scorer?,” your first answer might not be “Jason Pominville.” But, it would be the correct one. That Buffalo is still in the playoff hunt with Pominville – a fine player, to be sure, but not one of whom you readily think, “scorer” – is testimony to the balance of the Sabres. That has been, and remains, one of the strengths of this club. The Sabres have 16 players in double digits in points (the Caps have 15 – Sergei Fedorov doesn’t count – indicative of progress they’ve made in this area), 13 with more than 20 (the Caps have ten). They have eight players with ten-or-more goals (the Caps have seven), three with at least 20 (the Caps have two).

Looking at the top scorers for the club, their career stats against the Caps:

Jason Pominville: 10 games, 3-2-5, +2…but he has four of those points in the three games between the clubs this year.

The Sabres have won all three games this year by a combined score of 15-7. This is, as if it isn’t obvious at this point, a stiff test, even if the Sabres have struggled lately. But, the time comes when you leave the kiddie rides behind and ride the Kingda Ka.

Tonight, the Caps pass the first round of the test…