The Peerless Prognosticator is ON THE AIR!!! -- Game 54: Capitals at Blue Jackets, January 30th

It had been a while.

Columbus laid that whuppin’ on the Caps in the midst of a winning streak that they would extend three more times to reach eight games in all, a franchise record. That streak ended on January 25th against, of all teams, the Buffalo Sabres. That loss started the Blue Jackets in a different direction. They are on a three-game losing streak coming into Thursday night’s game.

In their 3-3-0 run since beating the Caps on January 17th, Columbus has split 38 goals right down the middle with their opponents, 19 goals apiece (not including a shootout goal in a 4-3 win over Buffalo on January 18th).

It really is a split-personality run that the Blue Jackets have been on since that win over the Caps:

Overall, it is James Wisniewski who leads the Blue Jackets in points over the six games since last facing the Caps (1-5-6). Wisniewski is on quite an extended run of good performance, scoring-wise. He has points in eight of his last 11 games (3-9-12) and has climbed into the top ten among NHL defensemen in points (5-28-33, tied for ninth). In eight career games against Washington he is 1-3-4, even.

Derek MacKenzie leads the Blue Jackets in goal scoring since Columbus last faced the Caps (three). He has a third (two) of the six goals scored by Columbus in their last three games, although he had a three-game goal-scoring streak stopped in Columbus’ 3-2 loss to Ottawa on Tuesday. He is 0-1-1, minus-3, in six career games against Washington.

One has to think that it will Sergei Bobrovsky getting the call for the Blue Jackets in this contest. When he was given the night off in Columbus’ 3-2 loss to Ottawa on Tuesday, it broke a string of seven straight starts over which he was, quite frankly, skating in pretty good luck. His record was 5-2-0 over those starts, but his goals against average of 2.63 and save percentage of .909 suggested he was not playing as well as his win-loss numbers would indicate. He had a particularly tough time in the game against Buffalo that ended Columbus’ eight-game winning streak. In 23 minutes he allowed three goals on ten shots, two of them shorthanded, both of them eluding his glove. He did bounce back with a 32 save effort in a 3-2 loss to Carolina, but he seems to have settled into a pattern of allowing three goals or so per game over the past two weeks. 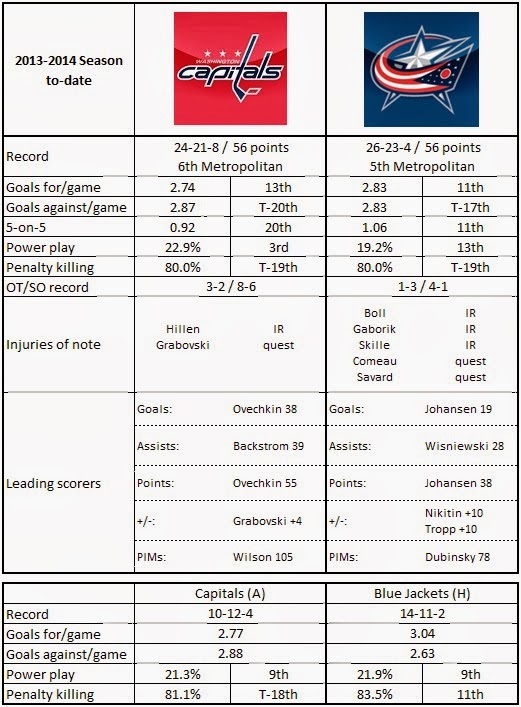 1. That eight-game winning streak certainly stands out in Columbus’ season to date. It stands in stark contrast to a more bleak character to the rest of their season:

3.  The Blue Jackets have trouble holding back teams over 60 minutes.  Only Toronto (62) and Calgary (61) have allowed more third period goals than the Blue Jackets (60).

4.  Columbus can calim to have a certain balance in scoring.  Eighteen players have at least ten points through 53 games.  By way of comparison, the Caps have 13 such players.

5.  Despite having lost three straight the Blue Jackets’ possession numbers have been generally solid overall.  Their Corsi-for percentage at 5-on-5 close score situations is 62.8 percent over their past three games, as is their Fenwick-for percentage (numbers from extraskater.com).

1.  The Caps have not had an extended winning streak so far this season, but a win tonight will make it five streaks of three or more wins this season.

3.  If the Caps win, bet on it not being by two goals.  The Caps have only two two-goal wins this season.  Only Dallas, Calgary, and New Jersey have fewer.

4.  Only the Islanders, Calgary, and Buffalo have fewer wins this season when leading after the first period than Washington.  Then again, the Caps have taken a lead into the first intermission only 13 times in 53 games.

5.  Since December 27th, when the Caps held just a cumulative 45.4 percent Fenwick-for percentage at 5-on-5 close score situations, they have dragged that number up to 48.8 percent (numbers from extraskater.com).

In the three games Columbus won immediately after beating the Caps on January 17th, Brandon Dubinsky had a pair of goals and a pair of assists, along with ten shots on goal.  In the three losses that followed, Dubinsky was held off the score sheet and managed only four shots.  It goes with his season-long trend.  Largely absent when the Blue Jackets lose (2-8-10, minus 10, in 24 losses), he is better than a point a game player in wins (9-15-24, plus 17, in 23 wins).  It might be fair to say that as Dubinsky goes, so go the Jackets.  He has a goal and two assists in three games against the Caps this season.

When Mike Green posted two goals and an assist against Buffalo on Tuesday, it made for 11 points in his last 12 games and lifted him into the top-15 in scoring among NHL defensemen.  The big night in Buffalo was not a one-time reminiscence of the days in which he was the league’s top offensive defenseman, but the latest in a sustained stretch of offensive production.  What is more, he is doing it with a lighter on-ice burden.  His 23:12 average ice time per game sounds like a lot, but it would be his lowest over a full season (more than 50 games) since he logged 15:29 per game in 70 games of the 2006-2007 season.

1.  “Everything Should Be Made as Simple as Possible, But Not Simpler.”  This quote is attributed to Albert Einstein, and what it boils down to is, “keep it simple, stupid…but not too simple.”  Tend to fundamentals, but avoid drifting into the lazy, reaching sort of defense that led to more than one Buffalo goal on Tuesday.

2.  “Reality is merely an illusion, albeit a very persistent one."  Another Einstein quote…hey guys, don’t get it in your heads after Tuesday that you’re back to being the 2010 Caps and can just outscore teams.  Fall into that trap, and another 5-1 pasting at the hands of the Blue Jackets awaits.

3.  "I never think of the future. It comes soon enough."  Ol’ Albert, again.  The Caps will head to Detroit right after this game for the first of a home-and-home against the Red Wings.  Don’t get ahead of yourselves and start thinking about The Joe…

Six points separate second and seventh place in the Metropolitan Division, and the Blue Jackets and Caps are right in the thick of it.  Unfortunately for both teams, they happen to be on the wrong side of playoff eligibility, should the season end today.  Even though it is the end of January, not the end of March, this is an important “four-point” game for the Caps.  It is likely to be this way for any Metro Division game for the foreseeable future.  And that means it’s time to focus and get down to work, or as Albert said… “weakness of attitude becomes weakness of character.”