The Peerless Prognosticator is ON THE AIR!!! -- Game 52: Capitals at Senators, January 31st

The Washington Capitals head back on the road for a short visit to Ottawa where they will face the Senators on Thursday night.  The Caps will try to shake off a lackluster performance in a 5-4 loss to the Nashville Predators on Wednesday, while the Senators will be looking to win their third game in four tries and extend their points streak to equal a season-high four games. 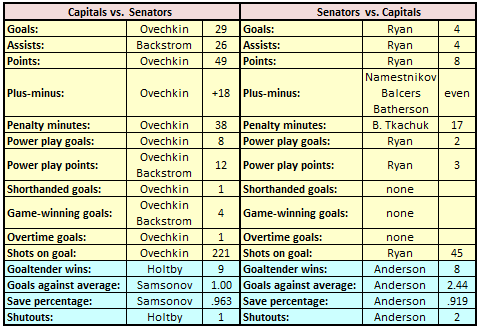 After posting eight goals in 21 games to wrap up the 2018-2019 season in Ottawa, Duclair kept the momentum going this season with 21 goals in 49 games going into Friday’s contest with Washington. Duclair has shown flashes of this goal scoring ability in the past, posting 20 in 81 games with Arizona in 2015-2016 and 19 in a 2019-2019 season split between Columbus and Ottawa.  What he lacked in the past was consistency, and what he has done now, in his tenure with the Senators, is look for his shot.  Until arriving in Ottawa, Duclair never averaged more than 1.74 shots per game with any of the other four teams for whom he played.  But with the Senators, he is averaging 2.63 shots per game, and the increased volume has not diminished his efficiency.  He is shooting 15.8 percent with Ottawa, the best of his career over any of his five stops.

Duclair has been more efficient and effective scoring goals at home with 13 of his 21 goals scored in Ottawa and his 17.6 percent shooting rate more than six point higher than his road shooting percentage (11.4).  He has been in a goal scoring slump recently, carrying a 12-game streak without one into Friday’s game.  Duclair is 3-1-4, minus-5, in ten career games against the Capitals.

Last season, Thomas Chabot was a top-ten goal scorer among defensemen (14/tied for eighth) and points (55/tenth).  For the first time in his brief career, he received votes for the Norris Trophy (he finished 18th).  This season, he does not rank in the top-50 in goals (four/tied for 61st) and does not rank in the top-25 in points (28/tied for 21st).  His minus-19 is already far and away the worst of his career (he was minus-12 in each of the previous two seasons).  His shooting percentage has fallen off a cliff – 3.0 percent this year compared to 7.6 percent last season and 9.6 percent in 2017-2018 with the Senators.  This might be the price one pays in the development of a young defenseman (Chabot turned 23 on January 30th and is in his fourth NHL season), and he does remain the leading point producer on the blue line, but having him return to the growth path his production displayed over his first three seasons will be an important ingredient to whatever success the Senators have going forward.

Chabot has been more productive on home ice of late in an encouraging sign for the Senators.  In his last 15 home games he is 3-7-10 and has points in four of his last eight games.  He is 0-1-1, minus-7, in five career games against Washington.

Some players accomplish big things over long careers and compile a long list of honors.  Some toil in a series of situations that are difficult, but they exhibit the attributes of skill and professionalism that make for a long and respectable career.  Goalie Craig Anderson is such a player.  In a 17-year career dating back to 2002-2003, Anderson has appeared in 637 games for four teams.  Ten of those seasons have been spent in Ottawa, where Anderson ranks first in games played (424) and wins (198), ranks ninth in goals against average (2.83; minimum: 50 games), ranks tied for second in save percentage (.914; minimum: 50 games), and ranks second in shutouts (28).

Anderson’s numbers have deteriorated over the last three seasons, mirroring the Senators’ fortunes overall.  In 131 games over those three seasons he is 47-64-11, 3.38, .900, with four shutouts.  Only three goalies in that span have more losses in regulation (Carey Price: 67; Jimmy Howard: 68; and Jonathan Quick: 69), and only five of 78 goalies over the period have a worse goals against average.  It has not been easy for Anderson or the Senators. 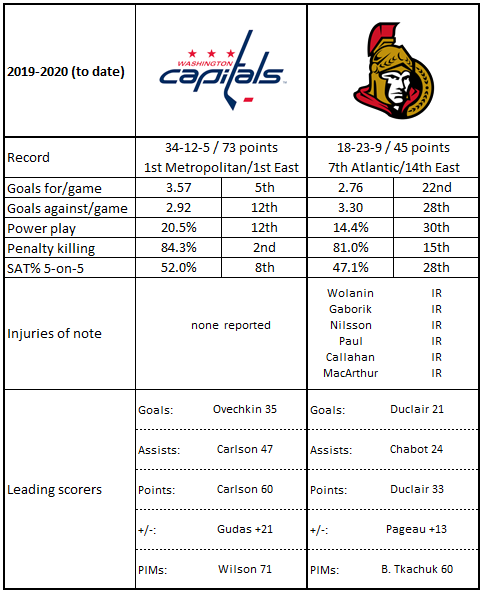 1.  Ottawa has the third best net penalty kill at home this season (after accounting for shorthanded goals scored) – 91.0 percent.

4.  Only Arizona and Vancouver have allowed fewer first period goals on home ice (14 each) than have the Senators (15, tied with Pittsburgh, Philadelphia, and the New York Islanders).

3.  The Caps lead the league in third period goals scored in road games (39).

4.  Washington is 8-0-0 when leading on the road after one period, one of five teams with perfect records (Pittsburgh, Colorado, Chicago, and the New York Islanders).

5.  The Caps could do a better job of protecting the puck on the road.  Their 9.77 giveaways per 60 minutes is worst in the league in road games.

Brady had an excellent rookie season for the Sens last year, finishing second in his rookie class in goals (22) and points (45), and third in power play points (10) in 71 games.  He also happened to finish second in penalty minutes (75).  He is slightly off that scoring pace through 50 games so far this season on a per game basis (15-14-29 in 50 games), but he does rank third on the team in goals scored and is tied for fourth in points.

On home ice, Tkachuk has been a bit of a head scratcher.  He leads the team in shots on goal on home ice (79), but he has only six goals to show for it (7.6 percent), tied for sixth on the team.  He goes into this game with only two goals in his last 12 games overall and only one in his last eight games on home ice.  Tkachuk is 0-2-2, minus-2, in four career games against the Capitals.

There is little doubt that after Wednesday night’s 5-4 loss to the Nashville Predators, that another log will be added to the fire of “goaltender controversy” in Washington.  Braden Holtby has been inconsistent over the last seven weeks (4-8-0, 3.72, .868 in 13 appearances), while Ilya Samsonov just keeps rolling along in his rookie season.  Over the same span of days over which Holtby has struggled, Samsonov is 8-0-0 (one no decision), 1.62, .941, with one shutout.  He has not lost a decision in more than two months (November 15th in a 5-2 loss to Montreal).

It does not seem to be a function of work volume that explains Samsonov’s success.  He has faced 27.4 shots per 60 minutes in that 8-0-0 run, while Holtby has faced 28.1 shots over the same period on the calendar.  It has not been a function of saves by strength, Samsonov holding a large edge in save percentage at even strength over this seven-week stretch (.959 to .881 for Holtby) and when the Caps are shorthanded (.895 to .833 for Holtby).  The oddest difference of all might be in save percentage when the Caps are on a power play.  Chances for opponents in such situations often come on breakaways or odd-man rushes, which makes Samsonov’s .800 save percentage in this period not unusual (eight saves on ten shots).  But Holtby has stopped only nine of 13 shots in that span (.692).  Further, Samsonov has been consistently stingier.  Over this seven-week stretch, he did not allow more than three goals in any of his nine appearances.  On the other hand, Holtby allowed more than three goals seven times in 13 appearances.

One might have the thought that Holtby is in a slump, and Samsonov is on a streak.  But at some point, seven weeks turns into a “who do we count on” situation, and the Caps might be coming to that point with their goaltenders.  Samsonov has faced the Senators once so far, stopping 26 of 27 shots in a 6-1 win on January 7th in Washington.

If the Caps need any more motivation to perform well against a team they might otherwise overlook, it is that they looked so thoroughly discombobulated, especially in the defensive end, against Nashville on Wednesday night.  Doing it in front of a national television audience did nothing for pride, either.  An angry Caps team can be a dangerous team, but only if that anger is turned into focus on a mission to play responsibly.  Fail that, and Ottawa is a good enough team at home to make things uncomfortable for the visitors.