The Peerless Prognosticator is ON THE AIR!!! -- Game 48: Bruins at Capitals: January 24th

Somewhere up there, in the great hockey beyond, there is a ledger. And the person keeping it is a Boston Bruins fan. On it, they have one entry:

And that person has been waiting for this day. It isn’t bad enough that the Boston Bruins, a team averaging almost a goal and a half more per game than their opponents and is scoring goals at 5-on-5 at an almost two-to-one clip over their opponents, is coming to Verizon Center to take on the Washington Capitals, losers of three of their last four games.

No, that would make the Bruins merely a “favorite” to win Tuesday’s matchup in Washington. The Caps will be missing three of their four “Young Guns” for this game. Nicklas Backstrom is still out with lingering effects from an elbow to the head offered by Rene Bourque. Mike Green is recuperating from sports hernia surgery. And now, Alex Ovechkin will be sitting out Tuesday’s game as a result of a decision handed down by Brendan Shanahan to suspend the winger for three games after his hit on Zbynek Michalek in Sunday’s game in Pittsburgh. That is almost 28 percent of all the goals scored by the Caps this season on the shelf against a team that ranks first in scoring and third in defense in the league.

As the teams prepare for Tuesday’s game, here is how their numbers look: 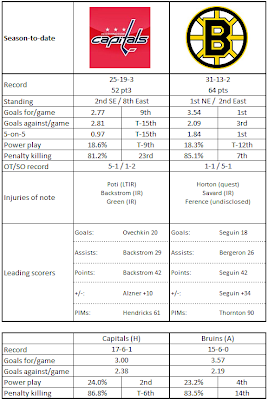 Yeah, that guy with the ledger has been waiting for this.

1. Boston is 16-1 in games decided by three of more goals. This is an amazing record until one realizes that in 46 games the Bruins have allowed three or more goals only 18 times (the Caps have done so 25 times). The only team to beat Boston by at least three goals? Carolina, in a 4-1 win in Boston on October 18th.

2. The Bruins are actually in a slump – 3-2-1 in their last six games and two of the wins came in a Gimmick. Both losses in regulation time came to teams from the Southeast Division – Carolina and Tampa Bay.

3. Boston’s power play is in a slump, too. In their last nine games, the Bruins are 4-for-32 (12.5 percent). You might think that their penalty killers are in a slump, too. They are 27-for-36 (75.0 percent) over those same nine games. But seven of the nine power play goals allowed came in two games – four of them in a 4-3 loss to Vancouver on January 7th and the other three in a 6-5 trick shot loss to Philadelphia in their last game, last Sunday.

5. The Bruins even do the little things well. No Bruin having taken more than 250 faceoffs this season (there are five players in that group) has a winning percentage below 53 percent. But here are some things to think about… Boston is 25th in the league in hits (one might think a team with their reputation for toughness would have more). They are 24th in blocked shots, yet have allowed the fifth most shots per game in the league (maybe they just let their goalies get good looks at shots).

1. If you think of shots on goal against and shots blocked taken together as “shots defended,” the Caps have defended the tenth-highest number of average shots so far this season (45.5 per game). Only three of the nine teams defending more shots are currently playoff-eligible (New York Rangers, Nashville, and Ottawa).

2. Remember that 10-2 win over Boston? Dennis Wideman was there… for the B’s, that is. Stranger thing – he had a goal, and former Cap Marco Sturm had the other goal for Boston in that game.

3. That 10-2 game was played on March 3, 2008. Only three of the 20 Caps dressed for that game are likely to be in this one – John Erskine, Brooks Laich, and Alexander Semin. Three of the four Caps to record three-point games in that contest are gone – Matt Bradley, Eric Fehr, and Matt Cooke. The other one – Alex Ovechkin – will be taking a seat courtesy of Brendan Shanahan.

4. How long ago is that 10-2 game in hockey time? Tom Poti actually played in it (23 minutes, two assists, plus-3). Donald Brashear actually had a goal in it (oh, and two fighting majors). Tim Thomas was pulled, not once, but twice.

5. Washington is one of only five teams that have not scored a shorthanded goal at home. The others are: Tampa Bay, the Islanders, Calgary and… Detroit? Yup, Detroit.

Hidden among the Chara’s and the Seguin’s and the Lucic’s’s’s is Rich Peverley, a player of modest accomplishments (67 goals and 183 points in 316 career NHL games), but who seems to have a knack against the Caps. In 17 career games against Washington, Peverley is 5-8-13 and has scored on both the power play and while shorthanded. Last year he faced the Caps six times and was 2-3-5 in those games, his highest point total against any team. He comes into this game on a three-game points streak and is 3-11-14 in his last 14 games.

OK, it’s up to you to keep the Young Gun flame alive, Alexander. He is certainly capable; he is 7-9-16, plus-11 in his last 16 games, playing with a Whitman’s Sampler of linemates. And, eight of his 12 goals this season have come at Verizon Center. He has not had much success goal-scoring against Boston in his career – four goals in 18 games, but interestingly enough, he does have six power play assists in those 18 games. Against Boston on Tuesday, Semin is going to have to do more on his own if the Caps are going to fight through the absences of other players from the lineup.

1. Simplicity. You can almost hear the late Herb Brooks… “Cuteness? Gentlemen, you don’t have enough cuteness to win on cuteness alone.” Certainly this Caps team doesn’t (as if they did when completely healthy). The only reliable skill player they will have in this lineup is Alexander Semin, and by “reliable,” we mean he’s actually scored more than 30 goals in a season a few times. A team that is going to have Brooks Laich, Troy Brouwer, Jason Chimera, and maybe Mike Knuble playing big chunks of minutes has to keep things simple. Get pucks to the net, pounce on pucks at the net, put pucks in the net.

2. Volume. The Caps troubles in getting shots on goal in the last month has been well-chronicled. But on the other side, Tim Thomas is facing almost 32 shots per 60 minutes, a higher number than you might think for a goalie on what might be the best team in the league. The Bruins are a team that will allow shots to get to the net. The Caps have to get them there.

3. Outside-in. If you look at the Caps, 13 of their top 15 shooters are forwards. The Bruins do things a little differently. Four of their top six shooters are defensemen. All of them – Zdeno Chara, Joe Corvo, Johnny Boychuk, and Dennis Seidenberg – have more than 90 shots. Only five Cap skaters have more than 90 shots. The Capitals will have to defend “outside-in” or at least prevent the Bruins from getting second chances when the defensemen get pucks to the net.