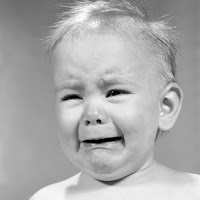 For all you Caps fans who discovered the joys of hockey over the last six months, welcome to Caps World.

The Washington Capitals were pushed to the brink of what would be the biggest playoff collapse in franchise history last night, losing Game 6 of the Eastern Conference quarterfinals to the Montreal Canadiens, 4-1.

Kelly Hrudey in 1987… Tom Barrasso in 1992… Ken Wregget in 1995… Jaroslav Halak took his place in the pantheon of goaltenders who were made by the Caps to be the next coming of Terry Sawchuk, the latest goaltender to come up large to force a seventh game when his team was down 3-1 to the Caps.

Halak stopped 53 of 54 shots in a stunning performance that might have sucked the life out of the Capitals for Game 7 of this series. The tone was set early as Halak stopped five shots in the game’s first 74 seconds to set the tone. Halak’s effort it wasn’t the product of cheap padding of shot totals, either. The Caps got shots from the players who needed to get them – Alex Ovechkin had eight (14 attempts), Alexander Semin had seven (16 attempts), Mike Green had six (12 attempts), Brooks Laich had six (nine attempts), Nicklas Backstrom had three (six attempts). In all, the Caps launched 94 shot attempts at Halak, more of them being blocked (23) than the Canadiens would have of theirs on goal (22).

You could say it was just “one of those nights,” but this is the sort of night that seems reserved for Caps fans – the goaltender who magically grows to a four-by-six-foot frame, stifling every attempt to rustle the twine behind him. Yup… you new Caps fans have now been baptized in the Church of the Perpetual Playoff Sorrows.

-- Max, the Canadian Olympic Committee called. You’ll be going to London in 2012 with the diving team.

-- 1-for-30. Let that sink in. If anyone said that the power play would decide this series, you would have bet a shiny nickel that they would be talking about the Montreal power play taking advantage of the Caps’ weak penalty killers. Montreal has had a respectable performance on the power play, but if one has said they would convert 18.5 percent of their chances, you might have taken that. But the Caps converting 3.3 percent of their chances? Incomprehensible.

-- By the time the game was 16 minutes old, the Caps had wasted a 4-on-3 and 5-on-3 power play, outshot the Canadiens 16-8, and were behind 2-0. For all intents and purposes, the competitive portion of the game was over.

-- As spectacular as Halak played at one end, Semyon Varlamov was, well, not spectacular at the other end. The three goals he allowed all came from the same general area of the ice – outside and above the right wing faceoff dot. Once could say that this or that shot was deflected or was shot through a screen, but three goals allowed from shots past the 30-foot mark won’t get you many wins, either.

-- 18 power play shots. Almost half the total they had taken in the other five games of the series combined. Half of them came from between the hash marks and inside the top of the circles. You can’t say they didn’t have their chances... 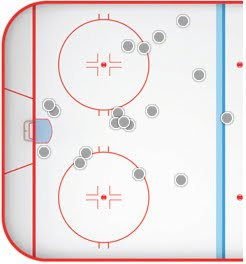 ...but the killer was getting no shots on goal on their 5-on-3 advantage.

-- Tomas Fleischmann is an arbitration eligible free agent at the end of this season. What would be his comparable, based on his playoff performance, a slice of angel food cake? Eight shots in six games (no more than two in any game), no goals, one point. He has as many points as Montreal defenseman P.K. Subban, he of the one playoff game’s worth of experience. He has half as many points as Canadien defenseman Jaroslav Spacek, which provides a nice symmetry, since Spacek has played in half as many games in this series.

-- 13 playoff games, 51 shots, and counting. The “Will Sasha Ever Score Again” watch continues.

-- What is it with second line centers on this team? Over the past two years… Sergei Fedorov, Brendan Morrison, Eric Belanger, Tomas Fleischmann – one goal in 30 man-games. If the latter three have one in them, let’s just hope it’s like the one Fedorov had… a series-winner.

The Caps made history this year – first non-original six team to reach the 120-point plateau, highest standings point total in franchise history, the first President’s Cup in franchise history. They are on the brink of making some more history – first number-one seed to lose to a number-eight seed after taking a 3-1 lead in games since the current playoff format was instituted in 1994.

And, ripping another page from the Caps’ history book, it doesn’t look good. As we noted in the pregame, no Caps team has ever lost a Game 6 and won a playoff series. The Caps are 1-2 in Games 7 since the lockout (all on home ice). The Caps are 7-8 in 15 home games in the playoffs over the past three years. They are 1-4 over the past three years when presented with an opportunity to eliminate their playoff opponent.

The good news is that the Caps are 6-2 over the last three years when facing elimination. But come 7 o’clock on Wednesday night, a lot of people will be thinking that the betting choice will be wearing white jerseys. It’s up to the ones wearing red to prove them wrong and take advantage of the home ice for which they fought over the past six months.
Posted by The Peerless at 6:25 AM 10 comments: