“There are no elements so diverse that they cannot be joined in the heart of a man.”
-- Jean Giraudoux

When you hear the name “Lars Eller,” you probably don’t think “offensive juggernaut.”  And yet, he is one of two Capitals in the post-2004-2005 lockout era to post at least 50 goals, 150 points, and have a rating of plus-10 or better in fewer than 400 games played for the Caps (67-94-161, plus-10, in 356 games); Jakub Vrana is the other).  When you hear “Lars Eller,” you might not think “special teams wizard,” although he is the only player to log the statistics noted above and record both power play goals (six) and shorthanded goals (three).  And, he is one of only two forwards in that span to have logged at least one minute of special teams ice time on both sides of the puck – power play (1:03) and penalty kill (2:09) – while dressing for at least 350 games (Brooks Laich is the other).  In fact, in terms of the diversity of his game, he might draw comparisons to Laich and, from a more distant era, Steve Konowalchuk, a capable player at even strength, power play, and penalty kill. 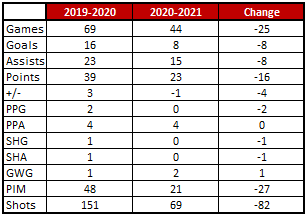 Fearless’ Take… Lars Eller is nominally the third line center, but in a pinch he can fill in as the pivot on either of the top two lines as well.  That kind of interchangeability, and more to the point his effectiveness in manning the scoring line, has enabled Eller to average more than half a point per game over the past two seasons.  That puts him in the top-50 among centers having played in at least 100 games over the past two years.  While that might not sound especially impressive, it is within rounding error of Matt Duchene, more than Max Domi and Jordan Staal, more than Paul Stastny and Eric Staal. There is also the consistency in Eller’s improved production.  He had 23 points in 44 games this season, a points pace that would have put him within striking distance of 30 points for the full 56-game season, which would  have been his fourth straight 30-plus point season with the Caps.

Cheerless’ Take… Eller had been among the most durable Capitals, logging three straight 81-game seasons before appearing in all 69 games last season.  This season, Eller missed a dozen games – four to an upper body injury, seven to a lower body injury, and one for personal reasons.  He also missed a game in the first round playoff series loss to Boston to a lower body injury.  The 12 regular season games lost were a career high for a single season.  Perhaps it was the injuries and missed time, but Eller limped, in a manner of speaking, to the finish of the regular season, recording only one goal in his last 14 games and going just 1-1-2 in his last ten games, although the Caps did post a record of 7-2-1 in those last ten games.

Odd Eller Fact II… The 12 regular season games lost were a career high for a single season.  In fact, it was more games missed than Eller had in the previous six seasons combined (11).

Game to Remember… May 8, 2021 vs. Philadelphia.  In the regular season’s penultimate game, the Caps were wrapping up their season series against the Philadelphia Flyers with the second of a back-to-back set of games at Capital One Arena, having lost the opening contest, 4-2.  The teams fought to a scoreless tie through the first 40 minutes before Scott Laughlin got the Flyers on the board in the fourth minute of the third period.  It looked as though the lone goal would hold up for the Flyers, especially when a Caps power play was expiring in the final minute of regulation.  But then, this happened…


Eller’s 6-on-5 one-timer from the bottom of the right wing circle with 39.8 seconds left in regulation got the Caps a standings point, and Conor Sheary won it at the 4:00 mark of overtime to complete the comeback.  It was Eller’s only goal against the Flyers in 2020-2021 in seven games.

Game to Forget... March 13, 2021 vs. Philadelphia.  No game illustrated Lars Eller’s issues with his presence in the lineup in the shortened season than a mid-March matchup against the Flyers.  This was the second of a two-game set in Philadelphia, the Flyers having won the opening contest, 5-3.  Eller missed that game due to a family matter.  Those things occur from time to time and are out of the player’s control.  Nevertheless, his return in the second game of the set lasted three shifts and 1:29 in ice time before he left for the remainder of the game with a leg injury.  He missed the next seven games for the Caps.

Postseason… It was a largely forgettable postseason for Eller, who went 0-1-1, even, in four games (he missed the 3-2 double overtime loss in Game 3 against Boston).  It was his second postseason without a goal, and he has only one in his last 16 playoff games (1-4-5).  It added a year to what has been an odd history in the postseason for Eller.  It might be until the sun goes dark that Caps fans will remember Eller’s 2018 postseason in which he might have saved the season with an overtime game-winner against Columbus in the first round and his game-winning, series-deciding, Cup clinching goal against Vegas in the Stanley Cup final.  He was 7-10-17 in 24 games in that postseason.  But in four other postseasons with the Caps, Eller is now 1-9-10 in 29 games.

Looking ahead… Lars Eller has two more years to run on a five-year/$17.5 million contract that will carry a $3.5 million annual cap hit.  Among centers age 27-35 (Eller is 31) and cap hits of $3.0-4.0 million, he looks like a bargain.  This season could be considered an off season for Eller, but it also would be reasonable to think of it as an anomaly, at least in the regular season, both in terms of durability and production.  There will be additional importance attached to his return to a higher level of production given the uncertainty surrounding Evgeny Kuznetsov’s future with the club.  And there remains the matter of his postseason production.  Eller should never have to buy a drink in Washington again, but it would be nice if next season his playoff production was a better approximation of that special 2018 postseason than what he experienced this season.

Lars Eller remains one of, if not the most versatile Capital in terms of his ability to fill a range of roles effectively.  When paired with his consistency over most of his tenure in Washington, he is an extremely valuable commodity.  There is no one on the current roster with his range of skills and his ability to deploy them consistently and effectively.  It has been, and it will continue to be an important ingredient to whatever success the Caps enjoy over the last two seasons of his contract.

Posted by The Peerless at 5:52 PM No comments: