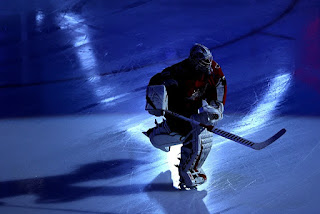 “The story of life is quicker than the blink of an eye, the story of love is hello, goodbye.”
-- Jimi Hendrix

It is one thing to see an athlete’s career in its entirety, from the first scouting reports, to draft day, through the years of development in juniors and the minor leagues, to the big club, through the struggles, through the successes, winning the ultimate prize.  And it is another to see all of that and know that the career you have followed as a fan for more than a decade is coming to an end – not in a justly deserved retirement ceremony with a widely-respected body of work to remember, but in another city with another team with another nation of fans cheering the player on.

That is the long goodbye that Washington Capitals fans have been dreading and experiencing almost since goalie Braden Holtby took the Stanley Cup from John Carlson and skated it along the rink of T-Mobile Arena after the Caps won the Cup in 2018.  And now, unless something unexpected happens, the day of reckoning is at hand.  Because this is the NHL, a salary-capped league, and at some point attention to business must paid.  With the expiration of the contract Holtby has with the Caps, there is the likelihood he played his last game for the team when the Caps were eliminated by the New York Islanders from this year’s Stanley Cup playoffs in August.

There will be a lot of remembrance and testimony about Holtby’s value to the franchise in his ten seasons with the club.  However, in the cold, harsh light of day, it might be that the time has come for him and the team to part ways.  Blasphemy, you say?  Perhaps.  But starting with that 2017-2018 season that ended in a Stanley Cup, Holtby’s performance has been diminishing slowly, but steadily. In the aggregate, he has an enviable win-loss record over those three seasons (91-49-15; his win total tied for fifth in the league in that span).  But his underlying numbers reflect a less-than-stellar level of performance.  Among 62 goalies logging at least 2,500 minutes over those three seasons, Holtby’s rankings are unimpressive:

Of 62 goalies appearing in at least 50 games: 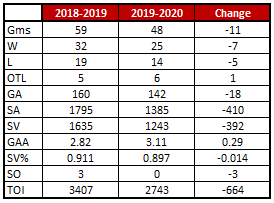 Despite his diminished numbers this season, Braden Holtby remains one of the most consistently excellent goaltenders in league history, as measured in regular season games from the start of his career.  Only seven goalies in league history have more wins than does Holtby (282) over their first ten seasons in the league:

Of that group of eight, only Plante had fewer losses in regulation (119) than Holtby (122); only Lundqvist and Plante had better save percentages (both at .921) than Holtby (.916); and he ranked sixth among those eight in goals against average (2.53).

Over the last three seasons, ten goalies logged at least 9,000 minutes, including Holtby.  No goalie among them had fewer shutouts than did Holtby (three).  Holtby had the highest goals against average of that group (2.96), and only Martin Jones had a lower save percentage (.903) than did Holtby (.906).  This season, he struggled late (again, he was hardly alone among the Capitals in this regard).  In his last 22 games, he was 8-10-2 (two no-decisions), 3.55, .880.  Only once in that span of 22 appearances did he earn consecutive wins, winning three straight decisions from February 23 – March 1.

Holtby was sharp early in his first meeting of the season against the Flyers, although he did not have a lot of work in the first period.  The Caps outshot the home team, 16-5, and took a 1-0 lead to the first intermission on a goal by Brendan Leipsic.  Holtby was sturdy in the second period when the Flyers doubled up the Caps in shots on goal, 12-6, but Holtby turned all 12 aside.

The 1-0 lead almost stood up, but the Flyers’ third power play of the game bore fruit when Claude Giroux tied the game in the seventh minute of the third period.  Neither team would score over the remainder of regulation, and Holtby stopped four shots in overtime to send the game to the freestyle competition.  The teams exchanged goals before Evgeny Kuznetsov scored in the bottom of the second round, setting up a must-score situation for Sean Couturier to force another round.  Holtby blockered aside the attempt, and the Caps had a 2-1 Gimmick win, Holtby’s 12th consecutive game against the Flyers without a loss in regulation time and his fourth consecutive win at Wells Fargo Center.

Game to Forget… October 14, 2019.  At least there weren’t many minutes to forget.  Braden Holtby won the season opener in St. Louis, beating the Blues, 3-2, in overtime.  But then, he lost three straight decisions, two of them in overtime, leading up to his appearance against the Colorado Avalanche.  Things did not get better at Capital One Arena.  Colorado scored on their first shot of the game, Erik Johnson getting credit at the 3:42 mark.  They scored on their second shot of the game, Nikita Zadorov scoring 6:00 into the game.  Just 1:54 later, Colorado had their third goal on three shots, Nazem Kadri getting the goal.  And with that, Holtby’s night was over.  It was, and remains, the shortest outing of his ten-year career (7:54).

It was Braden Holtby’s net in the postseason, and he probably served better than he got in terms of support in front of him.  In eight games, he allowed two or fewer goals five times and lost three of those decisions.  It was disappointing to see him finish with a save percentage under .900 in three of the five games of the opening round loss to the New York Islanders (all of them in losses), but the Caps scored more than two goals once in eight postseason games (a 3-2 win over the Islanders in Game 4 of their series).  With that kind of offensive support, a second round would have been tough to achieve for any goaltender.  The Caps’ woes were not a product of goaltending.

"The goalie market is probably a little unusually deep this year.  I talked to his agent last week briefly about where he's at and the kind of opportunities he's looking for. I would assume he goes to free agency and we'll keep in contact with him throughout the free agency period to see if he's getting what he wants."

That comment from Capitals General Manager Brian MacLellan on September 15th on the subject of re-signing Braden Holtby speaks volumes as to what fans can expect in this off-season.  And for those of a sentimental nature, those are not happy thoughts.  Holtby is coming off a five-year/$30.5 million deal with the Caps.  At the moment, the Caps have 17 players under contract to the parent club with a combined cap hit of $72/6 million, leaving $8.9 million in projected cap room and six roster spots open.  Two goalies are under contract included in those numbers – Ilya Samsonov, the heir apparent to Holtby ($1.1 million cap hit) and Pheonix Copley ($0.925 million; all numbers from capfriendly.com), who spent the 2019-2020 season with the Hershey Bears.  The Caps have room for a veteran free agent, but not one that carries a price tag of the sort Holtby could command, even if his recent performance diminished his brand a bit and the likely level of offer he might receive.

Fans can afford to be sentimental and look for reasons for the club to keep a treasured member of a championship past.  An NHL front office can afford no such luxuries.  Braden Holtby is the best goalie in club history (with apologies to fans of Olaf Kolzig, among whom we include ourselves).  He has more than twice as many postseason wins (50) as the goalie with next most in Caps history (Kolzig: 20), his goals against average (2.13) is best in team postseason history (minimum: 500 minutes), while his save percentage (.926) is one point behind Kolzig (.927).  His seven postseason shutouts are most in team history.  More than that, Holtby has been a role model for how athletes support their community.  But time marches on, and as Jimi Hendrix put it, “the story of life is quicker than the blink of an eye, the story of love is hello, goodbye.”