The Most Important Development for Hockey Since the Stick

Dan Steinberg, author of D.C. Sports Bog in the Washington Post, penned a column for the print edition of the paper today titled, "Capitals Lead Washington Into New Ice Age." It is the latest in what seems a torrent of stories about the Capitals and their explosive evolution into a phenomenon of "buzz."

But there was a sentence buried in the fifth paragraph of the story that almost had me come out of my chair...

An IMAX feature featuring Ovechkin? Hockey is, as a lot of folks seem to want to describe it, an emotional game. It's more than that. It is a paradox. A game that is extremely complex in its effects on the senses -- the sound of blades cutting into the ice and pucks rattling around boards, the chill of an arena, the visual aspect of speed and collisions, the sudden rush that comes to the observer when a goal is scored, a save is made, or a hit is executed -- has difficulty translating this cauldron of sensory ingredients to television.

High-definition television helps with detail and the larger aspect screen, but still has the vague feel of being constrained and limited.

But now, imagine the greatest force of nature in the sport featured in an IMAX format. The dramatic increase in visual scale, coupled with the audio possibilities and Ovechkin's ability to seize the moment in the most dramatic way strikes us as perhaps precisely what hockey needs, not to "introduce" itself to a broader audience, but to kick down the door and put its entire collection of unique gifts on display on a scale we haven't experienced.

You couldn't do this with another player. Sidney Crosby might be a better player (ok, so he's not), but he is above all else a technician. There is a cold, passionless efficiency about his game that appeals to a purist, but perhaps not to a wider audience that isn't familiar with the game.

You couldn't do this with a goaltender. The nature of the position argues against it -- it is too static, even with the occasional acrobatics a goaltender might display.

And what personality would lend itself to "filling the space" in an IMAX format...Joe Thornton? Hey, I like to watch the guy work, and he is an immensely skilled player, but exciting he's not.

Evolution is not always a gradual process, scientists tell us. Sometimes, a species just takes an evolutionary "leap" forward. It seems hockey has been waiting for that leap since Pete Parker broadcast the first complete hockey game on radio more than eight decades ago. We are no technical expert in broadcasting, and we have no experience in video feature production. But as a fan, hearing the words "Ovechkin" and "IMAX" mentioned in the same sentence ran a jolt of electricity up our spine. We can't imagine anything else that could capture -- no, grab by the throat -- the sports fan who might until now have been indifferent to hockey. 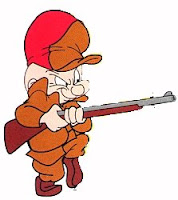 Oh…the peerless prognosticator is on the air…
...where does one find these thwash…thrashers?

I see. And you’ve done this before?

How do you go about hunting thrashers?

I see…so is it hard to get a lead on them?

“Oh, he’s a sneaky wittle thwasher…you get up cwose to him and he aw-ways seems to get away.”

Any other thrashers we need to be on the lookout for?

“Five-for-five this season. And Atwanta aw-weaddy has two shootout wins this month.”

I think I see another one…

Geez…thank heavens we were out hunting thwash…uh, thrashers with Elmer Fudd instead of a former vice president, or this entry would be done by now…

As for tonight’s opponent – the Atlanta Thrashers – do NOT, we repeat, do NOT underestimate them. Their record is 5-4-1 this month, which isn’t what one would call dominating, but it is a step up for that group. And, those four losses in regulation were to New Jersey, Philadelphia, Chicago, and San Jose. Only the loss to the Devils was by more than two goals, so the Thrashers have played respectably of late.

For the season, though, it has been a grind, as the overall numbers suggest… 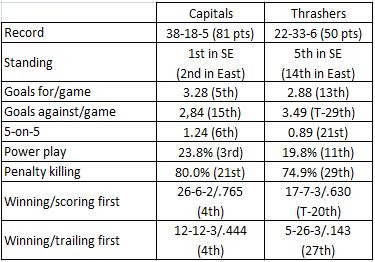 The formula for beating this team is a pretty clear version of how to beat teams in the NHL generally. Get a lead (Atlanta is 27th in winning percentage when allowing the first goal) and take a lead (they have won three of 30 games in which they trailed at the second intermission).

It doesn’t seem to be especially difficult to get a lead on the Thrashers – they have allowed more goals in the first period (71) than any team in the league, except Toronto. And as for taking a lead into the third period, again, only Toronto has allowed more goals over the first and second periods combined than have the Thrashers. The second period has been especially hard on Atlanta this year. They have a goal differential of -20 in that period for the season (49 goals scored, 69 allowed).

This is not a very good defensive team.

Individually, it is a team that can score. Ask Anaheim, who took one in the teeth a couple of weeks ago at home against the Thrashers. Six different Thrashers had goals in an 8-4 win in Anaheim. They were led, as they have been all season, by Ilya Kovalchuk, who had a hat trick in that game.

Kovalchuk is one of those guys – Caps fans, you know the type – who can score in bunches. And in February, he’s had a bunch. He has goals in seven of his last eight games, during which he’s gone 10-4-14, +2. Four of those goals have been on the power play. He’s had his share against the Caps over his career, too. He is 20-27-47, +11 in 39 career games against Washington.

Vyacheslav Kozlov might give the impression of being a one-trick pony, he being of the 5-for-5 this year in Gimmicks and 22-for-37 (59.5 percent) for his career. But he is the second leading scorer for the Thrashers in the hockey portion of the hockey season, too. His February has been, as one might expect, something of a mirror image of Kovalchuk’s. In his last eight games, Kozlov is 2-7-9, even.

Then there the guys we might think of as the “sneaky” guys. Todd White has 52 points in 61 games this year – already a career high for him. And, he has seven points in his last five games. Meanwhile, Bryan Little has provided some spark of late, too. After going without a point in ten consecutive games from January 20th through February 11th, he had seven points in four games (4-3-7) before being shutout against Colorado in Atlanta’s last contest on Tuesday.

Why? Well, it would be convenient to say that it is a product of a poor defense, and that is true on a team-wide basis. The defensemen as a group really can’t be singled out for this. Ron Hainsey had a decent start for the Thrashers after joining the club as a free agent. Then, he had a rather dismal stretch from November through January. He’s been somewhat better of late, finding himself as a “plus” player for the month of February (plus-3). Were he to finish that way, it would be his first month on the good side of the ledger since October.

Tobias Enstrom looked for all the world at the start of the year as if he would fall victim to the “sophomore slump.” After a rookie season in which he finished 5-33-38, -5 and was the object of some talk as a Calder Trophy candidate, he had one point and was minus-4 for October. Since then, though, he is 2-11-13, +5.

What the Thrashers have not had is solid or even consistently mediocre goaltending. Kari Lehtonen is, for lack of a better term, the “number one” goaltender. But he is pretty much a “second page” goalie in the NHL.com statistics for goalies. His 12 wins is tied for 36th in the league, his goals-against average (3.15) is 39th, and his save percentage (.908) is 29th. And he’s the best of the lot.

Johan Hedberg is 7-9-3, which masks a somewhat ghastly set of accompanying numbers. His 3.61 GAA is 44th – dead last among qualifying goaltenders – in the league, and his .884 save percentage is 43rd in the league (only Chris Osgood is worse). If Hedberg gets the start, Glory Days had better be getting deliveries of wings.

Atlanta: Whoever gets the start in goal

It is a mark of how spoiled Caps fans have become in such a short time that the current 2-2 mark on a five game home stand (losses to Colorado and Philadelphia) would be deemed a “disappointment.” The flip side of that is that the team should (and the operative word there is “should”) be of a mind to set things right and end the home stand on the right note. That would point to the Caps pressuring the Thrashers early, and that means rubber – lots of it – being thrown at the Thrasher goalie. They haven't stopped much of it this year. Tonight, they have to be sharp from the start, or the competitive portion of the evening might be over by 7:30.

Fleischmann has been in a bit of a skid of late. OK, he’s in a slump. He has one goal since netting the game winner against Pittsburgh on January 14th, a span of 16 games. Oddly enough, though, his minus-1 against the Flyers the last time out was the first minus game he’s had since January 13th against Edmonton. Getting that minus against the Flyers isn’t surprising. Philly is a physical team that uses that characteristic with a certain enthusiasm. Fleischmann, being of slight build (he is the second lightest player on the team at 190 pounds, if you believe that the program weight of Nicklas Backstrom is 183 pounds), seems to struggle against teams like that. He gets a break in this game – Atlanta is not a team with extraordinary size, especially among the players against whom Fleischmann is likely to be matched. He could have more room than he had, say, against Philly.

Yeah, or maybe use a rifle.