Week 18 looked a lot like Week 17, which means it looked like a lot of weeks so far this season… 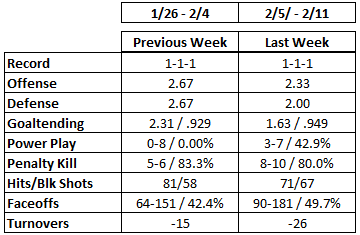 The Caps do not have many losing weeks this season – only four, in fact. By the same token, they have a lot of weeks like these. This was their sixth week finishing .500 in points, their second straight 1-1-1 week. But what makes this week even more disappointing than the last, despite the identical records, is the fact that this week’s 1-1-1 mark was achieved at home. The Caps were dominated by Boston, who went out to a 3-0 lead and rode the goaltending of Tim Thomas the rest of the way to a win. Then the Caps coughed up a 2-0 lead in the last 2:15 of regulation to Winnipeg – the second goal coming on a fluke 90-footer that Karl Alzner deflected on the way in – before losing in a Gimmick to the Jets. The losses sandwiched Tomas Vokoun’s fourth shutout of the season, a 4-0 win over Florida that briefly put the Caps ahead of the Panthers in the Southeast Division. Unfortunately, the Caps found themselves not only behind Florida once more by week’s end, but out of the playoff top-eight entirely.

This week it was pretty much Alex Ovechkin and not a lot else. Ovechkin had three of the Caps’ seven goals this week to give him 23 for the season and six in his last ten games. Four other skaters had one apiece, but what was noteworthy was that some streaks continued unabated – Joel Ward extended his streak without a goal to 15 games. Mike Knuble extended his to 27 games before being a healthy scratch against Winnipeg. Jeff Halpern – 25 games. Roman Hamrlik – 44 games. One cannot expect that Nicklas Backstrom’s and Mike Green’s production will be replaced easily, but the Caps need these guys to step up occasionally. That they have not at all on the score sheet in the last few weeks – or months – is the difference between third place and ninth place.

Allowing 99 shots is not particularly poor, but 215 shot attempts in three games is a bit much, especially when you are generating only 158 shot attempts of your own. Shot loads can be a bit misleading in this respect. Even though the Caps were out-shot only 94-99 this week, their goaltenders (well, “goaltender,” since Tomas Vokoun played in all three games) still has to defend as if each of those shot attempts is getting through, except for that empty-netter scored by Boston in the week’s first game. Again, the Caps are just relying too much on goaltending and not doing nearly enough to take the pressure of them.

Tomas Vokoun had a fine week, even with allowing three goals on 29 shots against Boston. He had the shutout in a big win over Floirda, stopping all 42 shots. Although one thing that should be said about that game is that he did appear to get a clean look at just about every shot he turned away. And even though he allowed two goals on 27 shots against Winnipeg, one came on a scramble in front with the Jets skating 6-on-3 with their goalie pulled on a power play, and the other came on an odd deflection of a 90-foot shot by Dustin Byfuglien that clipped the stick of Karl Alzner on the way in and changed direction before hitting the back of the net. It was another week in which goaltending was not the problem, another week of wasting some fine efforts, and another week wondering that if the goaltending starts to falter, it won’t crash quickly and loudly with all the work.

Three of the Caps’ seven goals this week came on the power play. They scored those goals on the last seven power play shots they took for the week. It was made better by who got the goals – Alex Ovechkin had two, and Alexander Semin had the other. These guys have to be regular contributors on the power play, especially with Nicklas Backstrom and Mike Green out. By any measure it was a good week. And a good thing, too, since the Caps had only three even strength goals for the week (plus one shorthanded).

The other side of the special teams ledger was not good, not bad. It would have been a lot better but for the two late power play goals allowed to Winnipeg (including the fluke tying goal). In that respect it is hard to be too hard on the penalty killers, except to note that the Caps have one win in ten tries when allowing two or more power play goals, the only win coming on opening night against Carolina. This week it might have been a case of the goalie being the best penalty killer. Tomas Vokoun stopped 18 of 20 shots on goal when the Caps were shorthanded.

Blocked shots are again an indicator of shot attempts. The Caps topped 20 twice this week and again were over 30 percent of blocked shots (67) to total shot attempts (215), 31.2 percent. On the hits side of the ledger, the big game came against Florida, where the Caps were credited with outhitting Florida, 31-19. Of the 18 skaters, 16 were credited with hits for the Caps, only Karl Alzner and Keith Aucoin not getting on the hit meter.

It was a lot like the rest of the week for the Caps – not good, not bad. The Boston game skewed the results, and not in a good way. Looking at offensive and defensive zone draws,the Caps and Bruins were relatively even in total, but the Bruins owned the Caps, winning 16 of 23 in their defensive zone and 14 of 25 in their offensive zone. The Caps did better in the last two games of the week to make a week of it, but Boston is a team against which the Caps were thought to be competitors. These days, not so much.

The Caps lost each game and lost the week big. That is what 38 giveaways in three games will do. It was not a good week for the Caps in this regard, especially in the Winnipeg game, where the Caps were minus-11.

The Caps are seeing their season slowly bleed away. In their first 12 full weeks of the season they had six winning weeks and three .500 weeks. In their last six weeks that have had two winning weeks and four .500 weeks. They have avoided losing weeks, but they are not putting together any consistent run of good play that is reflected in wins and losses.

The schedule is about to become a bit more difficult in that the Caps will face San Jose, having already lost to the Rangers to start this week, before heading out on a four-game road trip. The Caps have seven games left before the trading deadline to figure things out – whether Mike Green is coming back soon, whether Nicklas Backstrom is coming back at all this season, whether to be a buyer or a seller, or to stand pat and roll the dice with the lineup they have.

No one would have expected this amount of uncertainty, this sort of riding the fence situation, this seemingly interminable run of .500 play.
Posted by The Peerless at 6:47 AM 4 comments: