Don’t you wish that goal cam was still on the fritz?

There are teams at this level of play who, when presented with an opportunity on a platter to send a team home for the summer, playing in their own rink, cheered on by their own fans, would plant their foot on the throat of their opponent from the drop of the puck and not let up until the life was choked out of them.

The Caps are not that team.

The Caps skated around without apparent urgency for 60 minutes, making Montreal Canadiens’ goalie Jaroslav Halak look like, if not quite Ken Dryden, then at least Bunny Larocque, as the Canadiens pushed the series to a sixth game with a 2-1 win in Game 5 of the Eastern Conference quarterfinal.

It wasn’t even as if the Habs dominated play. They got early goals from Mike Cammalleri and Travis Moen – both past the blocker of Caps goalie Semyon Varlamov and both looking stoppable – then played prevent defense for the last 50 minutes to secure the win in one of the most boring games conceivable in a playoff setting.

The record will show that Halak stopped 37 of 38 shots and won first star of the game (someone had to). But it was not as if he was called upon to make many great saves as much as he was called upon to be… well, sort of just “there.” In the “A Picture Tells a Thousand Words” file, the shot chart speaks about 999 of them… 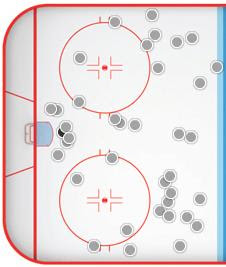 24 of those 38 shots came from above the circles and/or outside the faceoff dots. Seven came from – as the basketball folks might put it – “in the paint.” It’s telling that only one of those seven shots came from the second line (Alexander Semin). The first line (Nicklas Backstrom, Alex Ovechkin, Mike Knuble) had four of them, and the grinders (Boyd Gordon, Jason Chimera) had the other two.

Although there was enough blame to go around in this one, what came into clear relief in this game is that if the first line doesn’t score often (Ovechkin had the only goal for Washington), they are going to have trouble getting goals from elsewhere and, therefore, winning. And that is where the second line comes in. Not to put all the blame on Alexander Semin, but his having nine shots on goal to lead the team doesn’t mean he had nine scoring opportunities, as his shot graph shows… 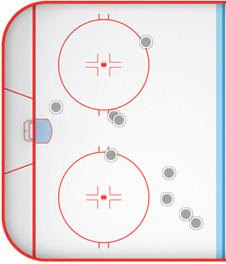 He did get four good looks at the net, but four lollipops from the far left point and another from the high edge of the right wing circle didn’t do much more than pad the shot total. But then there is this… 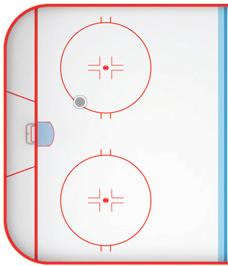 Under other circumstances, Tomas Fleischmann might have played himself into the press box with this game. 12 shifts (two in the third period), seven-and-a-half minutes of ice time, one inconsequential shot. The same might be said of this… 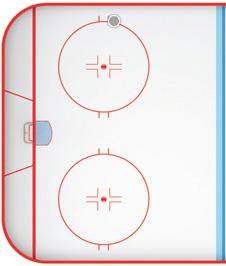 Brooks Laich has looked as if he is lacking his usual spark in this series. One shot and no points in more than 22 minutes last night.

Then there is the matter of Mike Green. The defenseman looked at times as if he was still perusing the press releases of his selection as a Norris Trophy finalist. He was charged officially with two giveaways. That would be charitable. He treated pucks all night as if they were dirty socks he was leaving strewn about his bedroom floor.

It would have been nice if the goal cam that was not operating in the rafters above the Caps' goal had just stayed inoperable and postponed the start of the third period until, well, Tuesday.  The fact is, this game was not about the Canadiens, who played a passably efficient road game, letting the Caps more or less self-destruct on their own ice (on which, by the way, the Caps are now 7-8 in their 15 home playoff games over the past three years). It wasn't about the two early goals allowed by Semyon Varlamov, who otherwise had a solid game (although he wasn't often tested by Montreal).

If this series comes down to a Game 7, the Caps will be facing all those demons from the past once more – two losses in Games 7 on their own ice in three chances the previous two years, a whole host of wasted opportunities in years past. And they will be able to point to this game, when they showed up as if it was a Tuesday night game in January against the Panthers instead of an opportunity to put away an opponent and move a step closer to a Stanley Cup.


*  Kudos to all the fans at Verizon Center last night for that classy performance of "O, Canada" in accompaniment of Caleb Green and the cheering during the performance of the Canadian national anthem.  That, folks, is how it's done.
Posted by The Peerless at 8:52 AM 4 comments: