The Peerless Prognosticator is ON THE AIR!!! -- Game 49: Capitals at Canadiens, January 31st

The Washington Capitals are set to play the second half of back-to-back back-to-back games.  Fresh off a split of the first of these back-to-back games, a loss in Columbus to the Blue Jackets followed by a shutout win at home against the Pittsburgh Penguins, the Caps will head to Montreal on Saturday to face the Canadiens before returning home on Super Bowl Sunday to host the St. Louis Blues.

In their four-game winning streak, the Habs have done it with goaltending, specifically that of Carey Price.  Appearing in the last three games of this streak, Price allowed only three goals on 103 shots. A .971 save percentage.  It is part of a sustained run of fine performances by Price, who has allowed more than two goals in an appearance only once in his last 15 games (12-2-1, 1.53, .949, one shutout).  He is a top-five goalie in wins (26) and save percentage (.931), third in both, and he is second in even-strength save percentage (.940) among goalies appearing in at least 20 games.  Success against the Caps has been much harder to come by for Price.  In 16 career appearances he is 4-9-3, 3.24, .894.

Offense has been an intermittent thing with the Canadiens in their four-game streak.  They pounded the New York Islanders for six goals in a 6-4 win on January 17th to start the streak, the only Eastern Conference team to score as many as six goals against the Isles this season (St. Louis has done it twice).  In their last three games, however, Montreal has only a total of six goals, twice being held to one goal in regulation (a 2-1 overtime win over Nashville and a 1-0 win over the Rangers).

Alex Galchenyuk has three of the 12 goals the Canadiens have in their winning streak.  The former third-overall draft pick has not broken out in a big way in his third season in Montreal, but he is showing steady improvement in his production.  After a rookie season in which he finished with nine goals in 48 games, he had 13 in 65 games last season.  This season, with 13 in 47 games, he is on a pace to finish 23 goals.  If he can get to 25 he would be only the 17th player at age 20 or younger on February 1st to reach that mark since the 2004-2005 lockout.  In six career games against the Caps, Galchenyuk is 0-3-3, even. 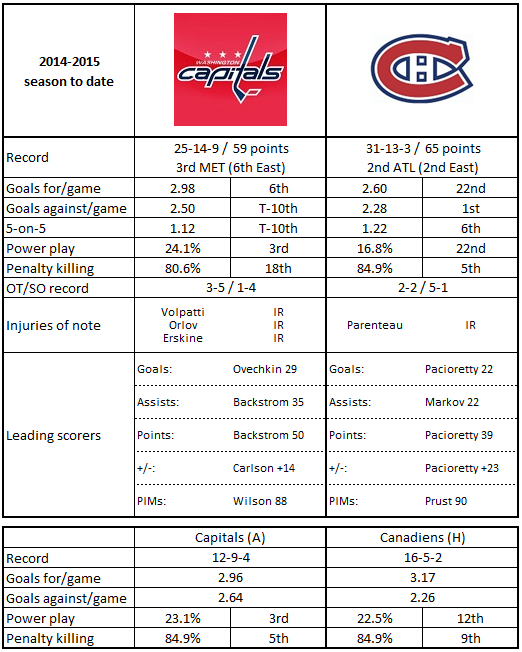 2.  This does not prevent Montreal from being successful in a broad range of outcomes.  They are fifth in the league in winning percentage in one-goal games (.650/13-4-3), tops in the league in two-goal decisions (.889/8-1), and they hold their own in decisions of three or more goals (10-8).

3. What Montreal is, is a front runner.  Get a lead, and they tend to finish with one.  They lead the league in winning percentage when scoring first (.905/19-1-1), although oddly enough they do not often carry a lead into the first intermission.  No team in the league has held a lead after 20 minutes fewer times than Montreal (9).

4.  Montreal has a strange plus-minus profile at the individual level.  One might expect, whether a team is good or bad at even strength, a reasonably continuous range of values for that statistic.  And, with the Canadiens there is, ranging from plus-11 on the high side to minus-9 on the low side of 26 skaters.  The 27th skater, though, is Max Pacioretty, who is quite an outlier at plus-23, the sixth-highest mark in the league.  It blows away his previous career best (plus-8, set twice).

5.  One might think that the pressure a crowd can put on officials would result in the Canadiens getting a lot of “home town” calls.  They do not, at least as far as getting power plays is concerned.  Montreal has the fifth-fewest power play opportunities in the league so far, and the differential between power plays and shorthanded situations is virtually a draw (minus-2) on Bell Centre ice.

1.  For the Capitals, getting power plays on the road is a rare occurrence.  With only 65 power plays awarded this season, the Caps rank 27th in total road power plays.

2.  The Caps are the only team in the Eastern Conference with a goal differential in each regulation period of plus-5 or better.  And here is something to watch.  The Caps have more than twice as many goals scored in the first period as does Montreal (41-20).

4.  “Caps” burglars…Washington leads the league in takeaways in road games, and by a healthy margin (185) over Carolina in second (172).  Take that fact with a grain of salt, depending on who is doing the counting of takeaways.

5.  This is the first of two meetings this season at Bell Centre between these clubs.  The Caps are 8-0-1 in their last nine visits to Montreal, outscoring the Canadiens by a 33-14 margin, with four shutouts on the ledger.

Sergei Gonchar got a late start on the 2014-2015 season, missing the first 11 games of the campaign to a broken ankle.  Then, on November 11th, he was acquired by the Canadiens from the Dallas Stars for forward Travis Moen.  Montreal is Gonchar’s sixth team, starting with the Capitals, in what is now a 20-season career.  He is one of the few players left in the league to have played through each of the last two NHL lockouts (the 1994-1995 season was his rookie year with Washington).  At age 40, there can’t be much left in the tank, or is there?  In 31 games with the Canadiens he is averaging more than 19 minutes a game, fourth among defensemen in ice time.  He is also fourth in points among that group despite appearing in more than ten fewer games than each of the defensemen ahead of him (he is also the only Montreal defenseman to win a faceoff this season, so there is that, too).  Gonchar is not the point-producer he was earlier in his career, but he is 0-7-7 in his last 13 games.  In 30 career games against his former team, he is 6-17-23, minus-1.

This being the second back-to-back set of games this week for the Caps, one has to think backup goaltender Justin Peters is going to get one of these weekend games.  He has not done particularly well in the chances he has been given, and that is especially true on the road, where he is 0-3-0, 4.13, .856 in four appearances.  Perhaps an afternoon game will be more to his liking; he has not played in the daylight yet this season.  He is also 2-2-0, 3.33, .866 in five Saturday appearances.  Peters has not allowed fewer than three goals in an appearance since beating Florida in a shootout, 2-1, back on October 18th.  He has to start picking up the slack sometime, though, and this weekend might be where he starts.  Peters is 0-2-0, 4.22, .851 in three career appearances against Montreal.

These teams are separated by six points in the Eastern Conference standings, and with a win in regulation time the Caps could crawl within four points of the Canadiens and three of the Pittsburgh Penguins for fifth place in the conference.  Games in January and February tend to have a same vague feel about them, but it remains that that the Caps face a difficult schedule over the next four weeks and cannot afford a letdown.  Montreal has been a friendly place to visit in recent years, and no doubt the Canadiens are taking note of that fact.  Still, the Caps do seem to have found a way when they have had to for solving Carey Price in goal.  Count on that being the secret ingredient for a happy ending.

Capitals 3 – Canadiens 2
Posted by The Peerless at 7:13 AM No comments: