The Peerless Prognosticator is ON THE AIR!!! -- Caps vs. Panthers, January 8th

The second half of the season begins tonight as the Washington Capitals host the Florida Panthers. At 23-12-6 the Caps have the fourth highest number of standings points (52) in the Eastern Conference and this morning rest in fifth place. Although their standings position might be disappointing to some, the Caps are only two points behind last year’s pace after 41 games (24-11-6 for 54 points).

“Well begun is half done.” – Arisototle

So far, the Caps haven’t been starting games off with a rush. They are currently tied for 27th in the league in first period goals scored (with Edmonton). It is a neighborhood they share with the likes of the Islanders (29th) and Devils (30th). Hot exactly a high-rent district.

“Searching is half the fun: life is much more manageable when thought of as a scavenger hunt as opposed to a surprise party.” – Jimmy Buffett

The Caps have been searching for a different key to unlock the safe in which success is found. Through the first half they have been somewhat successful in adopting a more defensive posture in their game. After 41 games they rank tenth in the league in goals allowed per game (last year they finished 16th). They have shaved almost a quarter of a goal a game off last year’s result (2.77 to 2.54). They have been even more successful on the penalty kill, improving from a 25th place finish (78.8 percent) to what was a 3rd place ranking (85.4 percent) going into last night’s action. You would have to say that so far their search for an effective defensive game has been successful.

“Compared to what we ought to be, we are half awake.” -- William James

“It seems, in fact, as though the second half of a man's life is made up of nothing, but the habits he has accumulated during the first half.” -- Fyodor Dostoevsky

One hopes that the habits the Caps have picked up on defense carry forward into the second half. And that it only seems as if the offensive performance so far are “habits” they will carry forward. 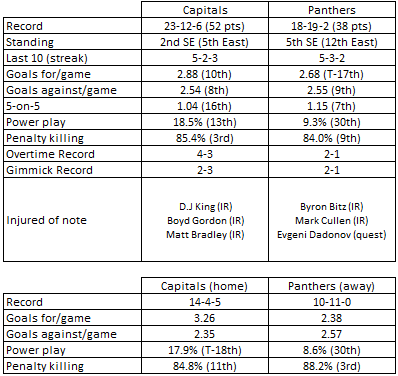 Part of the problem for the Panthers has been a yearlong problem. Their power play has been utterly ineffective. That they are 4-for-37 in the 12 games since they played the Caps last is actually an improvement (10.8 percent) over their overall season mark (9.3 percent). It is unfortunate for the Panthers in that in these last 12 games they have scored 3.00 goals per game. Any semblance of an effective power play, and their offense would have been much more difficult to deal with.

Florida has allowed 33 goals in the last 12 games in a month during which they have been occasionally very, very good (two shutouts) and other times very, very bad (twice allowing five goals). The penalty kill has been reasonably effective over the last 12 games, going 35-for-42 (83.3 percent), although they are 13-for-14 so far in the new year (92.9 percent).

The Panthers are not a particularly prolific team on offense (they were tied for 17th in scoring going into last night’s action). But they are balanced. Fifteen players have recorded at least ten points, none with more than 30. Michael Frolik leads the team in total scoring (8-18-26). He has had trouble finding the back of the net lately – nine games without a goal. But he has found teammates for seven assists in those nine games. He is 6-5-11 in 13 career games against the Caps, including a goal in the teams’ first meeting this season.

Stephen Weiss leads the club in goals scored with 13. Six of those goals have come in the last ten games. And, seven of his 13 goals to date have either tied games or put the Panthers ahead. He is 11-20-31 in 38 career games against the Caps, including a pair of assists in the first meeting in December.

The Panthers’ defensive corps has a number of names Caps fans might recognize – Bryan McCabe, Dennis Wideman, Bryan Allen. One they might not recognize is Mike Weaver. After breaking in with the Atlanta Thrashers in the 2001-2002 season and spending parts of three seasons there, he went west to play for the Los Angeles Kings (two seasons), Vancouver Canucks (one season), and St. Louis Blues (two seasons). This is his first year with the Panthers, one of only three defensemen to have played in all 39 games for the club (McCabe and Wideman being the others). Not known as much of an offensive defenseman (five goals and 50 points in 378 career games), he has assists in each of his last two games.

After going plus-43 in 160 games with the Boston Bruins over the 2007/08 and 2008/09 seasons, Wideman spent his last year in Boston going minus-14. In 39 games so far this season, he is minus-13. Now everyone knows that plus-minus is a statistic with limited explanatory power, but Wideman is the only Panther defenseman with a minus number this season. In his last 25 games he is minus-16 and has been on the plus side of the ledger only five times. If he is on the ice, don’t go to the concession stand. You might miss something.

Coming into this season Backstrom had more points against the Panthers than he had against any other NHL team (5-18-23 in 20 games). If there is a team against which he might emerge from his funk, this might be the one (even though he and the rest of his teammates could not solve the Panthers for a goal in the December meeting). Backstrom is 0-7-7, minus-4 in his last 15 games. That can’t last, can it?

1. Special Teams. The Caps rank in the middle of the pack on the power play right now, an unaccustomed place. Florida’s penalty killers – ranked ninth – might be able to keep the Caps’ power play quiet. What the Caps will need to do is not allow a weak Florida power play, currently dead last in the league, from getting a whiff of success. If the Caps allow any power play goals, they are shooting themselves in the foot.

2. 60 minutes. The Caps are coming off games against strong opponents – Pittsburgh and Tampa Bay. The temptation here might be to cut corners and, especially if they get a lead, to punch out early. Can’t do that against any team in this league.

3. When you assume… The Caps are thought to be one of the best teams in the league and one of its most dangerous offensive squads. Well, only two teams have been shut out more than the Caps, who have taken the donut five times this season. And, one of those shutouts has come at the hands of the Panthers. Scoring doesn’t just happen; the Caps will have to work hard for the goals they get against Vokoun.

In the end, the Caps are better, but not by so much as one might assume. That’s the kind of thinking that gets a team shut out 3-0 in December. The second half starts tonight, the start of the push to prepare for the playoffs. Now we’re going to see what sort of team we’ve really got here.