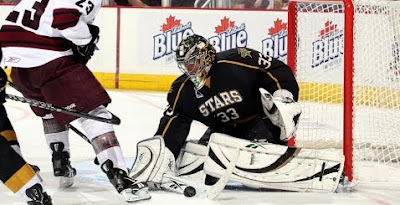 All streaks end. That’s why they are “streaks.”

It was not much of a game for those who appreciate flash and dash, and that was just the way the Stars wanted it. Content with counter-punching for much of the night, the Stars parlayed a couple of odd goals and some determined trapping to give the Bears only their second loss on home ice in their last 39 games.

If anything, this was a game that Texas probably had an advantage in from the start. Coming off two seven game series (one of which they won in a Game 7 overtime, the other in a Game 7 two-goal margin of victory), the Stars were still game sharp. On the other hand, the Bears looked like a team that hadn’t played competitive hockey in 11 days.

That layoff showed up early as the Stars outshot the Bears 12-2 in the first period and 14-2 over the game’s first 24 minutes. But in the 25th minute, Mathieu Perreault controlled the puck in the Stars’ end and from the middle of the ice found Francois Bouchard circling behind the Texas defense. Bouchard took the pass and patiently waited until goalie Matt Climie committed to the ice, then skated around him and stuffed the puck into the back of the net to give the Bears the 1-0 lead.

That lead lasted barely five minutes when Greg Rallo took the puck by himself into the Hershey end and before the defense could close on him fired a wrist shot that goalie Michal Neuvirth seemed whiff on with his glove. It didn’t matter as Rallo’s shot was perfectly placed just inside the left post and under the crossbar to tie the game.

The deciding goal came on a bad offensive zone turnover by Chris Bourque, who tried to pass the puck from along the right wing boards to Sean Collins, but only managed to get the puck to the stick of Scott McCullough. Bourque tried to make up for the error by backchecking furiously as McCullough raced down the left side, but in trying to slide across McCullough’s line of flight he took himself out of the play, and McCullough finished the play to give the Stars the goal that would provide the final margin.

The best thing that can be said for this game is that despite the 11-day layoff, despite looking very disjointed for the first period and through long stretches of the final 40 minutes, despite never really making Climie work for many of his saves, despite Alexandre Giroux picking up more penalty minutes (four) than the total of his and Keith Aucoin’s shots combined (three), despite an officiating performance by David Banfield that could only charitably be called “uneven,” the Bears held the Stars to two goals. If the Bears hold the Stars to two goals a game in this series, things should end well for the Chocolate and White.

The reason the Bears held the Stars to two goals, though, was not so much defense as much as it was Neuvirth, who was the one Bear who didn’t look as if he had just had an 11-day break. Stopping 24 of 26 shots, Neuvirth had the harder time of it in terms of the quality of chances he faced.

At the other end, Climie played well (26 saves on 27 shots), but the Stars’ game plan looked eerily similar to that employed by the Montreal Canadiens against the Capitals – they took away the center of the ice and forced the Bears to the outside and along the boards. The result was that Texas blocked a ton of shots.

Helping lead to all those blocked shots was the fact that the Bears took a little too much “care” in shooting (get it?...”care bears?”…ok, it’s a Caps thing). Between looking for the next pass or waiting too long to get shots off, Hershey allowed Texas to sit in what amounted to the hockey equivalent of a two-three matchup zone that you might find in basketball. There were no lanes available, either to make cross-ice passes (a favorite among the Bears last night) or to get shots from the points to the net.

One thing was clear as the game went on. Despite these teams not meeting in the regular season, they took an almost instant dislike to one another. There was much after-whistle yapping and shoving. Of the ten minor penalties called in the game, seven were “physical” fouls (cross-checking, high-sticking, slashing, and four roughing penalties).

Because of the games format (2-3-2), Saturday’s game becomes as close to a “must-win” game as there is for the Bears. Going to Texas down 2-0 with three games to play on Stars’ ice would be quite a hole. But even with this loss, Hershey looked like the better team on the ice. They just have to find ways to get more quality scoring chances on net and make Matt Climie actually play “goaltender.” They do that, and things will turn around quickly.
Posted by The Peerless at 6:34 AM No comments: