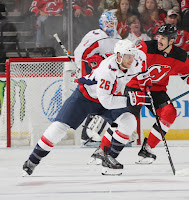 “Life grants nothing to us mortals without hard work.”
-- Horace

As replacements go for a bottom-six forward, Nic Dowd did not do a bad job replacing the well-respected Jay Beagle as the Caps’ fourth line center last season.  He did not play as many games as did Beagle in 2017-2018 (before he departed for Vancouver as a free agent), dressing for 64 games versus 79 for Beagle the previous season.  He did outpace Beagle in goals scored (eight to seven), finished one short of Beagle’s assist total (14 to 15), equaled his point total (22), and finished with a better plus-minus (plus-10 to Beagle’s plus-3 in 2017-2018).  It would have been quite a feat to replace Beagle’s faceoff success (a 56.4 percent win percentage with the Caps in his ten years in DC, 58.5 percent in his 2017-2018 season), but Dowd was a fine 51.9 percent for the season, best among all Caps taking at least 100 draws (in fact, the only such Capital over 50 percent).

Dowd’s performance last season was the sort of workmanlike result one expects from a player in his position, but considering that he was on a deal paying $650,000 a year, it was cost-efficient, too.  That he got a raise in a three-year deal at $750,000 a year might be considered something of a bargain, especially compared to the $3.0 million Vancouver will be paying for Beagle’s services over the next three seasons.  It also doesn’t hurt that Dowd is four years younger.

The Caps did pretty well when Boyd was engaged in the “grittership” areas of the game.  In 14 games in which he recorded a hit, a blocked shot, and won at least 50 percent of his draws, the Caps were 10-3-1.  Except for a dry patch in January, a month in which he did not record a point in six games, he was a fairly reliable point-getter.  In the five months in which he dressed for at least ten games, he had at least three points in all of them with a high of eight (1-7-8) in 11 games in December.  His has not been a long career – only four seasons and 195 games – and he will be 30 years old next spring (May), but if there is something to look for with him it is that in each of his two full seasons spend with one team (Los Angeles in 2016-2017 and the Caps last season) he finished with 22 points, despite not playing more than 70 games in either of them.

One thing that hurt the Caps as much as anything in the postseason over the last half dozen years was not getting production out of bottom six forwards.  They got it in good supply in their 2018 Stanley Cup run, but it dried up in the 2019 postseason.  Nic Dowd had one point in seven games against Carolina, a penalty shot goal in a 6-0 win in Game 5.  This was an especially disappointing result since he did not go more than two games without a point over his last 18 games of the regular season (3-4-7).  A fourth liner isn’t going to be bearing the scoring load, but it has been an issue with the Caps in the postseason, and it would help if Dowd could replicate some of his regular season effort in chipping in.

In three full NHL seasons, Nic Dowd has recorded 22 points twice (only four in 56 games split between Los Angeles and Vancouver in 2017-2018).  He is in what might be thought of as the chronological prime of his career at age 29.  He does not have a lot of mileage, and he plays on a team with enough high end skill and depth on offense to give him opportunities to chip in some of his own.  He was a solid all-around player within his role for the Caps last season.  With as much competition as there is likely to be among the wingers in training camp for bottom-six positions, what emerges might provide Dowd with more and more consistent fourth line support than he had at times last season.  But Dowd was also a healthy scratch 18 times last season, including a seven-times-in-12-games stretch from mid-January to mid-February.  If he can get unstuck in terms of playing time, perhaps he can get unstuck from 22 points as well.

Players of Nic Dowd’s sort are not irreplaceable.  On the other hand, sometimes they are bargains.  His cap hit is certainly attractive to a team than needs to shed payroll to get under the salary cap by the start of the season.  His goals/points per game last season (0.13-0.22-0.34) were actually superior than those Jay Beagle had over his ten seasons here (0.11-0.14-0.25).  It might be a reach to think of Dowd as a 30-point players, but more games at last year’s level of production, and if that level of production could be enhanced with stronger linemates, and it is not out of the question.  It is the kind of balance that the Caps rode to success in 2018 and could be a formula to enjoy that kind of success once more.

Photo: Bruce Bennett/Getty Images North America
Posted by The Peerless at 10:00 AM No comments: