Capitals vs. Flyers: Takeaways and Throwaways from Game 1 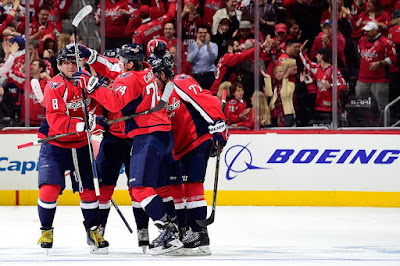 The Washington Capitals hit the Philadelphia Flyers so hard and so often last night that it left us without access to the Web or to any of our applications to do a post-game write-up.  But when life gives you lemons, you make lemonade, and the refreshing product (or so we hope) is a package of five takeaways and five throwaways from Game 1.

-- The scoring lines had an interesting breakdown of shot attempts.  The top line of Alex Ovechkin, Nicklas Backstrom, and T.J. Oshie had just three shot attempts at even strength (two for Ovechkin, one for Backstrom), but on the power play they combined for 14 shots attempts (nine by Ovechkin, three for Oshie, and two by Backstrom).  If the Caps keep getting looks like that on the man-advantage, the Flyers are going to have problems.

-- The second line, on the other hand, piled up the attempts at fives.  Evgeny Kuznetsov (7), Justin Williams (3), and Andre Burakovsky (2) combined for 12 shot attempts.  They did not get much power play action (five combined shot attempts), but if the second line can get their share of shot attempts against the bottom two pairs of Flyer defensemen, it could spell more trouble for the orange and black.

-- Two similar situations ended very differently and it might have been the difference in this game.  There was a point in the game when Mike Richards was flattened by a Brayden Schenn. Tom Wilson stepped in to express his displeasure. Richards jumped up and pushed Wilson away, avoiding what might have been a Flyer power play.  Later, when Wilson boarded Andy MacDonald with the Caps nursing a one-goal lead, there was no Flyer who stepped in to keep Simmons from getting in Wilson’s face.  Instead of a Flyer power play, the Caps got off with coincidental minors to Simmons (roughing) and Wilson (boarding), in addition to their respective fighting majors.  Three minutes later, the Caps scored an insurance goal.  That’s one of those “leadership” intangibles that does not show up in the numbers, except perhaps in the final score.

-- Marcus Johansson is expected to contribute offense, even as a third liner in this series.  But he showed he can contribute in a variety of ways, even when his own offense isn’t quite there.  Despite the fact that he had just one shot attempt in the game, it was his stripping Jakub Voracek of the puck just on the Flyers’ side of the red line that started the play that provided the insurance goal.  And do not discount that subtle little move on his part at the end of the play, when he drew  the puck back, pulling defenseman Brandon Manning just a little more out of the middle of the ice, creating a better lane for Jay Beagle to fill in, take Johansson’s pass, and snap the puck past goalie Steve Mason.  Johansson had the primary assist on both goals.

-- Shayne Gostisbehere is a gifted offensive player for a rookie defenseman.  But a rookie he is, and  he was caught in something of a no-man’s land after stepping out of the penalty box just as Marcus Johansson was stripping Jakub Voracek of the puck at center ice.  He had a decision to make in real time.  Head to the bench for a player to jump on, or break it off and fill in the middle, into which Jay Beagle was skating.  He continued to the bench, leaving a lot of open ice in the middle for Beagle to take advantage of, and that is precisely what Beagle did.  It was just one moment, but it might be something to watch for – Gostibehere’s decision making in the defensive side of the red line.

-- This is the fifth time that the Caps and Flyers have faced one another in the postseason.  In the previous four, the Caps won Game 1 three times.  They lost two of those series (1989, 2008).  They won last night.  Don’t read anything into it.

-- Game 1 was the sixth straight home playoff game without a goal for Alex Ovechkin.  He has one goal in his last ten postseason games at Verizon Center.  Mount St. Helens was quiet, too...until it wasn’t.

-- Tom Wilson was either incredibly stupid for his boarding Andy MacDonald in the third period or incredibly brilliant for goading Wayne Simmonds into a roughing-fighting set of penalties that snuffed out what might have been a power play.  Split the difference.  He was incredibly lucky.  And that is not the sort of luck you want to count on.

-- John Carlson’s game-winning power play goal has been described in some quarters as being the product of a lucky bounce or two,  His shot hit both Chris VandeVelde and Pierre-Edouard Bellemare on its way past goalie Steve Mason.  Yeah, well, how many times has that “luck” been on the other side of the Caps in the postseason, starting with this goal that ever so lightly got enough of Rod Langway’s stick to elude goalie Bob Mason deep into a seventh game…

Ever since then, it seems that when the hockey gods ladle out luck in the soup line, the Caps are in the rest room.

-- Caps fans seem quite confident after Game 1.  Put that nonsense away.  If time should teach anything to Caps fans, it is that every game is its own story.  What happens in today’s game might have absolutely no bearing on the next one, or the one after that.  Yes, the Flyers losing Sean Couturier for the series is quite a blow that could ripple through this series.  But don’t count on it.  Every game is its own story.