The Peerless Prognosticator is ON THE AIR!!! -- Game 28: Blue Jackets at Capitals, December 11th

The Washington Capitals return home Thursday night to face the Columbus Blue Jackets.  The Caps are back at Verizon Center after completing a perfect three-for-three road trip over three Eastern Conference opponents: the Carolina Hurricanes, New Jersey Devils, and Tampa Bay Lightning.  In the three wins the Caps outscored their opponents, 11-5, sported a 33.3 percent power play (although it was two goals on just six opportunities), and a perfect penalty kill on five shorthanded situations faced.  At no point in any of the three games did the Caps trail, and they “won” five of the nine periods of hockey, playing even in the other four.  It would be hard to draw up a better road trip than that.

As for the Blue Jackets, all of a sudden they are relevant once more.  A team that started well (4-2-0), then stumbled badly (2-13-2 in their next 17 games), the Blue Jackets come to Verizon Center winners in their last four games.  They won the state of Florida, beating the Panthers in a home-and-home before dispatching the Lightning last Saturday.  Then they beat Philadelphia on Tuesday in overtime for their 10th win of the season.

On an individual level, the standout in this four-game streak has been Boone Jenner.  He had single goals in each win to give him five on the season.  Jenner had not shown any special tendency to goal scoring, having totaled 17 in 84 games before this breakout.  He has not yet scored a goal against the Caps, but he does have three assists in four career games.

Seven other Blue Jackets have a single goal as part of the four-game winning streak, but Kerby Rychel leads the team in helpers with three in those four games.  The four games constitute the entirety of his NHL career to date, having only been called up to the big club less than two weeks ago.  Rychel, a 19th overall draft pick in 2013, will be meeting the Caps for the first time.

Sergei Bobrovsky had a bumpy start to the season, a 5-8-1, 2.95, .907 record in his first 14 appearances and a stint on the injured reserve list with a fractured finger sustained in practice.  He was the goalie of record in each of the four wins in the recent winning streak and posted excellent numbers in the process, a 1.70 goals against average and a .948 save percentage. 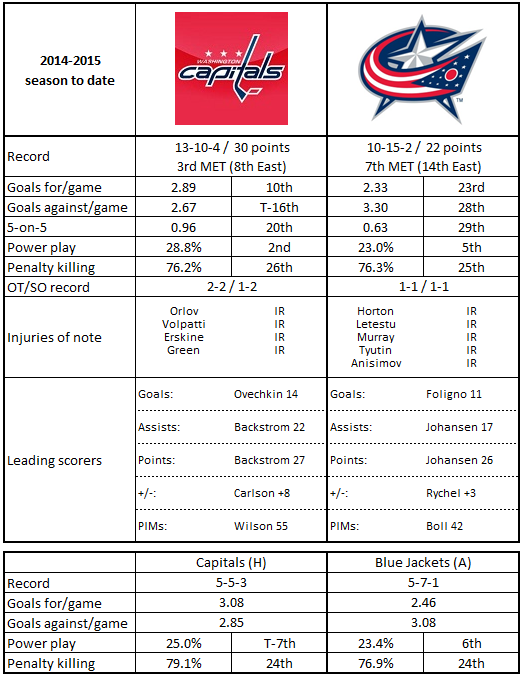 2.  On the other hand, through Tuesday’s games, no team scored more 5-on-4 goals than the Blue Jackets (22, tied with Detroit).  Part of that is a good power play (23.0 percent, fifth in the league), but part of it, too, is getting chances.  Columbus is tied for sixth in total power play opportunities (100).

3.  If the Caps have had their issues with scoring third period goals (and they have), Columbus has issues on steroids.  The Blue Jackets have scored only 16 third period goals this season, tied with Winnipeg for last in the league.

4.  That third period goal scoring makes for a ghastly goal differential (minus-22), because no team in the league has allowed more third period goals than the Blue Jackets (38, tied with Dallas).

1.  Coming off that last Columbus random fact, the Caps have the third best winning percentage (.857/12-1-1) when scoring first and are tied for the fifth highest number of wins (12).

3.  Washington is one of five teams this season to have scored at least one 5-on-3 power play goal but not to have allowed one.  Chicago, Tampa Bay, Pittsburgh, and Minnesota are the others.

4.  The Caps were outshot in all three of their wins on the just-completed road trip.  Might have been a good thing.  The Caps are 27th in winning percentage when outshooting their opponent (.333/5-7-3).

5.  The Caps have no participated in a trick shot competition since Game 5, a 3-2 win over Florida.  At the time, it was their third freestyle competition in their first five games.  By the time the Caps reached Game 28 last season (the game they play on Thursday) they had eight Gimmick decisions, posting a 6-2 record in them.

Ryan Johansen had a lot of drama attached to his contract situation before the season got underway, and he is generally considered, if not Columbus’ best player, then in sight of that target.  But here is Nick Foligno, 26 games into the season, leading the Blue Jackets in goals (11) and in the midst of a productive, if a bit odd season.  Foligno opened the season with points in his first six games (3-6-9), then went three games without one.  Since Game 10, though, he is 8-7-15 and recording points on generally an every-other-game basis (literally, over his last ten contests).  What might be a bit odd for a team-leader in goals, Foligno does not yet have a game-winner this season (let’s hope that continues one more game).  He is 2-7-9 in 19 career games against Washington.

In a development that Caps fans might not have expected, at least until it become clear Dmitry Orlov would not be able to answer the bell for the start of the 2014-2015 season, Nate Schmidt has played in each of the Caps’ 27 games to date.  Marc Staal (33), Zbynek Michalek (35), Jonathan Ericsson (34), Andrej Sekera (33), Zach Bogosian (50), Andy Greene (34), and Kris Russell (41) are the only defensemen having taken more shots than Schmidt (31) without yet finding the back of the net.  He has been solid in a somewhat sheltered role (14 minutes a night and generally paired with Mike Green, when the latter is healthy).  What he has not done is try to play outside his comfort zone, and that has helped him avoid mistakes leading to goals, as his plus-4 suggests.  He is 0-1-1 in three career games against Columbus.

This will be an interesting test.  The Caps have a so-so home record (5-5-3, fifth-best in the Metropolitan Division) and would like to get off on the right foot in an abbreviated two-game home stand.  Then there is the fact that like the Tampa Bay Lightning, who the Caps beat on Tuesday and play again on Saturday, the Caps face the Blue Jackets in this game, then travel to Columbus next Thursday in a rematch.  It is an opportunity to make a statement as to the pecking order of teams in the Metro, one that involves the Blue Jackets looking up at the Capitals.

So said Michael Corleone in “The Godfather, Part III,” but Caps fans might have been thinking that late last night after the Washington Capitals defeated the Tampa Bay Lightning, 5-3, at Amalie Arena in Tampa.

It was a night for the stars to shine and the secondary scorers to contribute.  It got started early for the Caps when Alex Ovechkin finished some fine work by Tom Wilson behind the Lightning net, taking a feed from Wilson to the right of goalie Ben Bishop and sliding the puck under the Bolts’ goalie to give the Caps a 1-0 lead 40 seconds into the game.

Then the teams started exchanging goals.  Brain Boyle scored on a deflection for the Lightning at 13:49, but the Caps got that one back just 34 seconds later when Matt Niskanen wired a one timer past Bishop’s blocker on a power play to restore the Caps’ one-goal lead.

In the second period, Steven Stamkos scored on spin-o-rama forehand from the slot to tie the game at two apiece just 47 seconds in.  A little less than four minutes later, Brooks Laich gave the Caps the lead once more with some deft stick work in close, pulling the puck from below the goal line to his forehand at the post and swatting it past Bishop to make it 3-2 at the 4:36 mark.

The Caps finally got a two-goal lead mid-way through the third period when Troy Brouwer, who had been foiled on an earlier breakaway, beat Stamkos down the middle on a Caps rush, took a feed from Marcus Johansson, and flipped the puck past Bishop at 10:52 to make it 4-2, Caps.

After that it was a bit of window dressing.  Valtteri Filppula made it a one-goal game with 3.2 seconds left.  Ovechkin got the last one and his second of the night with less than a second left for the 5-3 final margin.

-- The two goals for Ovechkin ended a four-game streak without a point. It was his fifth multi-goal game of the season and 90th of his career.

-- Backstrom’s two assists give him ten helpers in his last nine games.  It was his 91st career multi-assist game.

-- The Caps shut the Lightning out on the power play on three tries.  Part of the success was holding Stamkos without a power play shot on goal.  Tampa Bay managed only three shots on goal in six minutes of power play time.

-- On the other side, the Caps did manage a power play goal (Niskanen), but it was their fourth straight game and eighth in nine in which they had two or fewer power play opportunities.

-- Stamkos was a minus-3 for the Lightning, his worst plus-minus for a game this season.  We anticipate much media angst over this development.

-- Brooks Laich’s goal made it three goals in four games.  It is the first time he pulled off that feat since scoring three in four games, March 10-16, 2012 against Boston, Toronto, and Winnipeg.

-- The win makes it a three-game winning streak for the Caps, tying their longest of the season (November 7-11 against Chicago, Carolina, and Columbus…score one for the “Three C’s”).  Caps fans might be forgiven for thinking it has been a long time since the Caps won three in a row on the road, but they did it last April, beating the Islanders, Blues, and Hurricanes in the dying days of the 2013-2014 season.

Any way you slice it, this is a good win.  The top line produced, the secondary scorers contributed, the penalty killers did their job, and Braden Holtby was strong in net when he had to be.  And, it is now a three-game winning streak, all of them on the road, giving the Caps a respectable 8-5-1 record away from Verizon Center.  It also allowed them to climb into eighth place in the Eastern Conference, one point behind the Boston Bruins and holding a game in hand.

The job now is to bring that good effort home for games against the suddenly resurgent Columbus Blue Jackets (four straight wins) and these same Tampa Bay Lightning, who will have this game fresh in their memories.  The Caps are pointed in the right direction and got good efforts in this game from players from which they need good efforts on a consistent basis.  Getting Brooks Laich engaged just helps that much more.  Maybe they’re on to something here.