Capitals vs. Flyers: Takeaways and Throwaways from Game 6 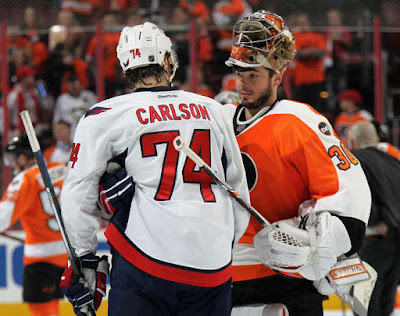 The first four wins are now in the bank for the Washington Capitals.  The Caps survived the Eastern Conference quarterfinal series against the Philadelphia Flyers, scratching out a 1-0 win in Game 6 to win the series, four games to two. For a game with so little scoring, there was considerable drama and momentum shifts toward one or the other team.  In such a contest, there might be some takeaways and some throwaways at the end of it.

“Faceoffs are generally considered one of those mundane tasks that do not have much of an effect on games…until you lose a critical one.  Like the one the Caps lost that led directly to the game-winning, series-clinching overtime goal in last year’s playoff series against the New York Rangers.  [Jay] Beagle and Mike Richards led Caps forwards still with the team in shorthanded ice time.  Beagle taking draws in his own end on the Flyer power play is a responsibility that should not be held as insignificant in this series.”

In Game 6, the Caps took only five shorthanded faceoffs, all of them in the defensive zone, and lost three of them.  Although it was a one-draw margin, it was the third time in the series they finished under 50 percent in faceoffs taken while shorthanded.  They won all three games (Games 1, 2, and 6).

What was remarkable about Game 6 was the utterly pedestrian nature of it in one sense.  It resembled so many games the Caps played in the first two thirds of the season. Stifle a team, get a lead, suffocate the life out of them, Holtby.  Don’t forget, the Caps won 27 of 41 one-goal games in the regular season, the best winning percentage in the league (.659).  And low scoring games have not been all that unkind to the Caps. Including Game 6, the Caps are 14-15 in games in which they score only one or two goals this season (shootout decisions not included), a respectable record.

Overall, the 4-2 final margin in games does not paint an accurate picture of how this series unfolded.  They had a 53.6 percent Corsi-for at 5-on-5 (fifth in the league through Sunday), 54.3 percent in score-adjusted Corsi-for (third of 16 teams). The Caps held the Flyers to six goals overall, only three of them at 5-on-5 (one power play, one empty net, one 4-on-4).  Braden Holtby had the third-best 5-on-5 save percentage of any goalie in the league (.974; minimum: 50 5-on-5 minutes).

The other side of that is the resilience of the Flyers to have the ice tilted in their direction for so much of the series, for having to contend with that "hot goalie" that so often haunted the Caps, and still make a series of it.  Remember, this is a team that was breaking in a new head coach in Dave Hakstol and one that was not generally thought of as quite playoff-ready when the season began.  One could sense the fans in Philadelphia recognized this as the game ended, as Wells Fargo Center erupted in cheers for their team that battled so hard in this series.

That the Caps were extended to six games is almost entirely a product of the fine play of Michal Neuvirth in goal for the Flyers.  But this time, the Caps did not lose to a hot goalie, they won in spite of facing one.  In that sense, this team really does look different than its predecessors.

Photo by Len Redkoles/NHLI via Getty Images
Posted by The Peerless at 9:15 AM No comments: