The Peerless Prognosticator is ON THE AIR!!! -- The Home Opener: Caps vs. Blackhawks

“These guys are the coolest guys in the world…”


When last we convened here, this was the result. A clinching moment propelling the Capitals to the Southeast Division championship and a ticket to the dance. Well, tonight the Caps start the home portion of their quest to take the next step as they host the new look Chicago Blackhawks at Verizon Center.

“You don't need flapjacks to party 'til ya puke.”

Well, if it isn’t our old pal, Dr. Phil…Doc, you must be here because of the loss last night. It was pretty gruesome…

“You don't need a diploma to disgrace your family.”

“That’s right…and I even brought my telestrator to show you where the Caps went wrong last night…now here’s Jose Theodore floppin’ around like a mackerel, and here’s Milan…ya know that’s a town in Greece or Albania or one of those fancy-schmancy European countries no one can pronounce…but when the Caps got down a couple o’ goals, ya gotta say, ‘Don't worry about the horse being blind, just load the wagon.’”

You’re not John Madden, either… 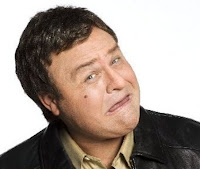 “I want you to find this nancy-boy Patrick Kane, I want him DEAD! I want his teammates DEAD! I want his locker burned to the GROUND! I wanna go there in the middle of the night and I wanna piss on his ashes!”

“What he did was he went off on a tangent over there. You know what a tangent is.”

“Easy there, Pinky…ya gotta be calm…have some calmification when you’re writing your column there, because you don’t want to give the Axis of Evil – that’s the Penguins, the Rangers, and the Flyers – any more…am-myoo-ni-shun.”

You are NOT the President of the United States. Look, pal, I got stuff to do here, and I think you’d better leave… 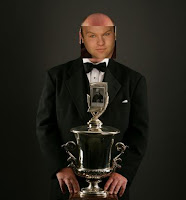 The Blackhawks could very well be this year’s Washington Capitals. Last year, the Blackhawks made some noise before finishing tenth in the Western Conference, three points out of a playoff spot. This year, they are ready to take the next step – a young bunch on the go, with a sprinkling of veterans in key positions thrown in.

The keys for the Blackhawks are their two second-year forwards – Patrick Kane and Jonathan Toews, both of whom were finalists last year for the Calder Trophy for the league’s top rookie. The two combined for almost a quarter of Chicago’s total goals last year, and this despite Toews missing 18 games to injury.

But if there is someone else to keep your eye on tonight, it might be worth your time to watch Patrick Sharp, especially when the Blackhawks are killing penalties. Sharp tied for the league lead in shorthanded goals last year, with seven to his credit. His 36 total goals led the team.

The Caps will once more get a look at Martin Havlat, a former tormentor from his days with the Ottawa Senators, but who has had difficulty staying healthy enough to torment anyone. He missed 83 games over the past two years, missing 47 games last year (including the last 19 of the year) primarily as a result of a shoulder injury.

There are some new faces that the Blackhawks hope will jump start the youngsters into contention. Brian Campbell was signed to an eight-year deal to provide some veteran stability on the blue line. He should be a fine complement in the offensive end of the ice to Kane and Toews – his 54 assists last year was second in the NHL among devensemen.

The Caps also will get a look at an old (if still young) face in Andrew Ladd, formerly of Carolina, who played in 20 games for the Blackhawks at the end of last year. Ladd, a former fourth overall draft pick, didn’t grow quickly enough to suit the Hurricanes, but should find a home skating with Toews, Kane, and Havlat.

Then there is Cristobal Huet, the author of an 11-2 record with the Caps in the stretch run last year (1.63, .936, two shutouts). He took the money and scampered off to Chicago, where he will be expected to do the same things Jose Theodore is expected to do in Washington – with the same uncertainties. Huet has never appeared in more than 52 games in a season (last year was his career high). He’s shown himself to be a more than capable puck stopper (career .918 save percentage), but not so good that he couldn’t be traded with another player for a Mathieu Garon, as he was (with Radek Bonk) in 2004, from Los Angeles to Montreal, or for a draft pick, as he was to Washington last February. He’s shown he can handle the burden of being a “sort of” number one goaltender, but with Chicago fans expecting a big leap forward this year, can he be the definitive number one goalie? Just as Washington might go only as far and Theodore can take them, despite the considerable skating talent the Caps have, so too might the Blackhawks go only so far as Huet can carry them.

Chicago skated, and lost (4-2) , last night against the New York Rangers in an effort that was described in the Chicago Sun Times as “stage fright.” They get to play the foil once again in an opponent’s home opener. We don’t think they will fare any better, the Caps having the added incentive of payback for the 5-0 whipping the Hawks laid on them last spring on Tony Esposito Night, in what would be Olaf Kolzig’s last game in a Washington uniform. And, we suspect the Caps’ ears were burned on the way back to DC by Coach Boudreau…it won’t have gone on deaf ears.
We just wonder if we'll see Brent Johnson tonight...

Email ThisBlogThis!Share to TwitterShare to FacebookShare to Pinterest
Labels: Gameday 2008-2009

In the history of the Capitals franchise, they have won at least 40 games 11 times. Their record in opening nights of those seasons?


Don't read too much into one game.
Posted by The Peerless at 12:50 AM No comments:

Nicklas Backstrom. Meet the only Capital not on the ice for a Thrasher goal tonight, and that included both goaltenders.

Tomas Fleischmann. He was on for four goals, tops (so to speak) for the Caps on the evening…in less than ten minutes of play.

Brooks Laich. The only Cap with a winning record on faceoffs (7 of 10). The rest of the Caps were a combined 22 wins, 41 losses.

Jose Theodore. OK, four goals on 17 shots, that was bad enough, but he looked like he was handling the puck with a frying pan out there. Nerves? OK…we’ll by that, for now.

OK, who had the Thrashers getting seven goals, and Ilya Kovalchuk getting none of them (and only two shots on goal, to boot)?

Niclas Havelid is on a pace for 246 assists. That would be a record.

Mike Green didn’t get his second goal until game ten last year. Tonight he had two that were, get this, 52 seconds apart in the second period.

Alex Ovechkin. Did not have a goal, did not have a point, did not lead the team in shots (Mike Green did), had one hit, missed a penalty shot. We’re betting he has better nights.

Zach Bogosian…the fights probably get easier from here on out.

Bryan Little-echkin…two goals, an assist, three points, six shots…in only 14 and a half minutes.

Kari Lehtonen got a star…sounds odd for a guy who gave up four goals, but he was (with the exception of a five minute stretch in the second) the best player on the ice.

More Caps had penalties (nine) than had points (eight).

The Caps, as of right now, have given up more goals than any other team…and keep in mind, the Rangers have already played three games (four goals allowed). 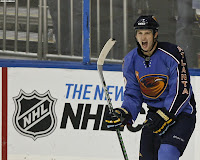 Don’t you just want to slap this guy?

As for the Caps, it was a strange night. At times, they looked as if they could score at will (and but for a fine performance by Lehtonen, probably would have). At other times, they looked like they couldn’t defend against air. The goaltending was, to be charitable, awful. One doesn’t expect two guys with a combined 670 games of NHL experience to look scared (in the case of Theodore) or unfocused (Johnson, at times) on a season’s opening night. Not that they had much help. When 17 of 18 skaters are on the ice for at least one goal from the opposition, it is a team-wide breakdown. So don’t single out Tomas Fleischmann for his on-ice-for-four-goals night (although we already did); and don’t single out Milan Jurcina or Jeff Schultz, both a -2 for the defense (although we just did), and don’t single out David Steckel for being on the ice for three goals and having a rough night in the circle with losing nine of 15 draws (although there we go again).

Except for a five minute stretch in the second period, when the Caps scored three goals, they generally stunk up the joint, but in a perverse way it was a good thing. Despite all of the negatives described here, they were tied with six minutes left in the game. Sure, it was against a bad team, but the Caps have picked up where they left off last year in that no opposing lead is safe.

Trouble is, they gave it back just as fast tonight…let it not be a trend.
Posted by The Peerless at 12:13 AM 3 comments: