The Peerless Prognosticator is ON THE AIR!!! -- Game 32: Predators at Capitals, December 20th

The Washington Capitals and the Nashville Predators meet for the second time this season on Tuesday at Verizon Center. In the first meeting, the Predators spotted the Caps an early third-period goal by Troy Brouwer, then came back with three unanswered goals to win, 3-1. It was a…

“Cuz!...I wrote me a song to celebrate Nashville comin’ to town.”
Let's hear it, Cheerless...


“They faced off down in Nashville,
The Capitals and Preds.
The Caps, they scored the game’s first goal,
But in the end, they wound up dead.
They couldn’t skate ‘round Weber
They couldn’t score on Rinne.
The way this team is goin’,
They couldn’t score in shinny.
So now the Preds are comin’ into town;
The Caps want to settle scores.
But after winnin’ their first seven games
Fans are thinkin’ that they’re bores.
If Warshington is gonna start winnin’ games
By tons and tons and tons…
They need to get more scorin’ from
The guys they call ‘Young Guns.”
Uh…that’s nice.

Without accompaniment, here is how the two teams compare going into Tuesday night’s game: 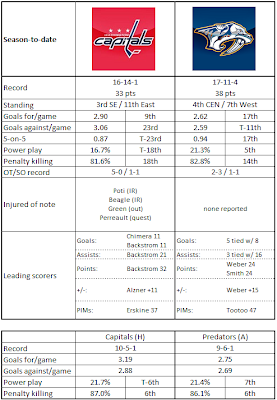 1. Back in November, before the teams’ first meeting in Nashville, we asked” Who is Craig Smith?” At the time he led the Predators in points and was tied for the team lead in goals. Well, here we are five weeks later, and Craig Smith – who we remain sure only his family and teammates could pick out of a lineup – is tied for the team lead in goals and points. His goal-scoring seems to have dried up, though. He has one in his last 17 games.

2. Speaking of ties, what a log-jam atop the Nashville leader board. Five players are tied for the team lead in goals. In addition to the aforementioned Craig Smith, there are: Shea Weber, David Legwand, Colin Wilson, and Patric Hornqvist.

4. Goaltender Pekka Rinne has a disconnect in his personal numbers. His .924 save percentage ranks 13th among NHL netminders, yet his goals against average stands at 2.48, 21st among NHL goalies. Why the difference? Rinne has had to face 32.5 shots per 60 minutes of play this season. Of the top 30 goalies in goals against average this season, Rinne has faced the most shots-per-60 minutes.

5. Want to see what a functional power play looks like? Look at Nashville. That’s right – Nashville. The Predators have not gone consecutive games without a power play goal in more than a month – 14 games, in fact. In those 14 games they are 14-for-43 (32.6 percent). They had a seven-game streak with at least one power play goal broken in their last game against St. Louis, but there was a reason for that. They did not have a power play in that game.

3. Nicklas Backstrom is tied for fourth in power play points (3-12-15), one point behind the Sedin twins in Vancouver and Edmonton's Ryan Nugent-Hopkins.

5. Tomas Vokoun has four career appearances against Nashville. In them he allowed only eight goals (2.01 goals against average) on 116 shots faced (.931 save percentage). He won only one of those four games, and that came via a shutout. Talk about having to do everything yourself…

Weber is at or near the top of the heap in a bushel of statistical categories among NHL defensemen: goals (second), points (third), plus-minus (tied for fourth), power play goals (tied for second), power play points (tied for fourth), total ice time per game (fifth), and he even has a shorthanded goal. He is coming into this game on a streak that scoring forwards would envy (well, for the Caps). In his last 25 games he is 8-14-22, plus-14. He was 1-1-2, plus-3 in the first game between these teams, one of six multi-point games he has this season. Just back the Brinks truck up to his locker now; he will command a huge sum entering restricted free agency after this season.

One thousand games played. Mike Knuble will hit that milestone in this game. Of that total, 991 of them will have been played after he reached his 25th birthday. He has been, as they say, a late bloomer. But this game might have bittersweet undertones to it, Knuble having been relegated to the fourth line as the Caps desperately search for someone to provide some production on the right wing on the top line (the early contestant for this game would appear to be Marcus Johanssson, following Alexander Semin and Troy Brouwer). Knuble has but one goal in his last 22 games and has not produced a goal in a Caps win since the third game of the season. Of the 15 forwards having taken the ice for the Caps this season he is ninth in even strength ice time per game. That might not sound so bad until one realizes that it is more than the likes of Jay Beagle, Cody Eakin, Matt Hendricks, Mathieu Perreault, and D.J. King (combined NHL games: 420). But part of being a leader is taking personal adversity in stride, and there is no better leader or professional on this team than Mike Knuble, whose example should serve as a wake-up call to the rest of this bunch.

1. Get a lead, keep a lead. Nashville comes into this game on a five-game winning streak. In it, they have a total of eight third period goals. While the Caps have allowed 31 third period goals, it remains the only period of regulation in which they are a “plus” team for the season (plus-3). If they get a lead – no easy feat these days – they need to be keenly aware of Nashville’s propensity for late fireworks. They were not in the first meeting, and they surrendered three unanswered goals after taking a 1-0 lead early in the third period.

2. Are we set in net yet? The Caps are 14-4-0 when scoring three or more goals, 2-10-1 when scoring two or fewer. The Caps have not gotten much in the way of goalies stealing games so far this year. With Pekka Rinne likely to be at the other end of the ice (and a save percentage of .947 in his last four games), the Caps probably will not be getting much on their end of the scoreboard. Whether it is Michal Neuvirth getting a third straight start for the first time this season, or Tomas Vokoun getting a chance to redeem himself after an iffy outing against Philadelphia last week, the Caps are going to have to get a top-notch performance in goal. Any softies, and this night almost certainly will not end well.

3. Close the Second Line Follies Road Show. The second line has not done much for the Caps. Even more than the top line and the revolving door at right wing, the second line has had players swapped in and out. Alexander Semin, Troy Brouwer, Marcus Johansson, Cody Eakin, and all the members of the “Meat and Potatoes” line (Laich, Chimera, Ward) have spent a little time up there. It looks as if Jeff Halpern gets a chance to center that line. The unsettled nature of that line and its almost total lack of reliable contributions on offense is one of the things killing this team. Getting it on track is especially important if Nashville deploys the Weber/Suter defensive pair against the top line.

In the end, there isn’t much secret to what Nashville does. They do not have much in the way of high-end fire power, but they have balanced scoring. They rely on solid play from the goalie out, starting with Pekka Rinne and the Shea Weber/Ryan Suter defensive pairing. They are opportunistic and will wear teams down to take advantage of them in the third period. It was a winning formula for the Predators in the first meeting. We will see if a new set of eyes behind the bench can change the result.