The Peerless Prognosticator is ON THE AIR!!! -- Game 5: Panthers at Capitals, October 18th

The Washington Capitals wrap up their three-game home stand on Saturday night when the face the Florida Panthers at Verizon Center. The Caps go into the contest as one of only two teams in the Eastern Conference – the New York Islanders being the other one – without having yet endured a loss in regulation time (2-0-2).

Both the Capitals and the Panthers finished the 2013-2014 regular season on the outside looking in at the playoffs. For the Capitals it was their first time missing the post-season since 2006-2007, ending a string of six straight appearances. For the Panthers, missing the playoffs is a state of being.  Only once over the past 13 seasons have they reached the post-season, only four times in the 20 year history of the franchise.  Florida has not won a playoff series since they won the Eastern Conference final on their way to their only Stanley Cup final appearance, in 1996.

This year’s edition of the Panthers will likely have to deal with another round of meager expectations.  Last season’s squad ranked in the bottom three of almost every meaningful team statistic. That is a team with entirely too many holes to fill in one off season to manage a significant climb up the standings.  And it is not even a case of the Panthers icing a team with a lot of young prospects.  They are the eighth oldest team in the league, and ten of the 19 skaters they have dressed have passed the age of 30.

As one might expect, the Panthers have stumbled out of the gate.  They played the Tampa Bay Lightning close in the season opener, losing a 3-2 overtime decision.  However, they have only one goal scored in their last two games, a 5-1 loss to the New Jersey Devils and a 1-0 loss to the Ottawa Senators.  They have only two goals from forwards (Derek MacKenzie and Jonathan Huberdeau), and only three forwards with points (Scottie Upshall being the third).  As a team they are shooting 3.8 percent on 3-for-80 shooting.  This is a team that appears to have a bleak future in the short term at the very least.

Here is how the teams compare in their numbers from last season. 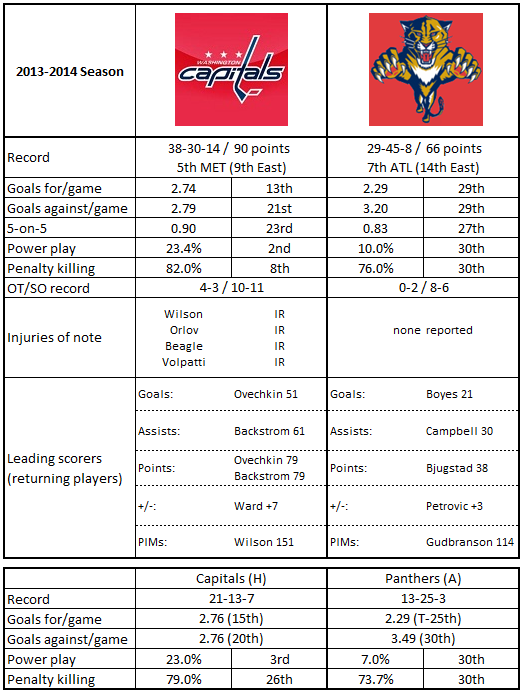 3.  In an 82-game season, the Panthers played in 25 games in which they lost by three or more goals.  See a pattern here?

1.  Going into Friday’s games the Capitals had the second best overall goal differential per game (+2.00); Minnesota was the only team with a better one (+4.00).

3.  The Caps have scored 16 goals through four games.  Last season they did not score their 16th goal of the season until Game 6, the last goal in a 4-2 win over the Edmonton Oilers.

4.  The Caps lead the league in blocked shots going into Friday’s games (58).   It wouldn’t be possible without the four blocked shots by Alex Ovechkin.  We kid, but last year he had 22 total in 78 games.

5.  Four teams have two wins of three of more goals.  The Caps are one of them along with Minnesota, San Jose, and Los Angeles.

Aaron Ekblad was taken first overall in the entry draft held last June.  He is not being eased into a role with the Panthers.  The defenseman out of Windsor, Ontario, is averaging almost 22 minutes a game over his first three NHL contests and got almost 24 minutes of ice time in his last outing against Ottawa.  He has been on ice for only two of the nine goals allowed by the Panthers thus far.  He leads all rookie defensemen in average ice time (it’s early; there are only ten rookie defensemen who have dressed so far this season).  There is a bright future there, but even a bright star on a dark night can shine just so much light.

By now all Caps fans know that Nicklas Backstrom goes into this game with 499 points scored in 499 career regular season games.  Only three other natives of Sweden had careers of playing in 500 or more games, recording 500 or more points, and averaging at least 1.00 points per game: Mats Sundin (1,349 points in 1,346 games), Peter Forsberg (885 points in 708 games), and Kent Nilsson (686 points in 553 games).  In 36 career games against Florida he is 9-32-41, including three goals and three assists last season in three games against the Panthers.

Let’s face it, on paper this game isn’t close.  A three-goal win would seem like a nail-biter.  On paper.  As Caps fans know, depressingly so, games are not played on paper, and this team can play down to an opponent’s level with the best of them.  That said, the Caps got through their four-game opening stretch as good or better than one might have expected under a new coaching regime.  And, they look like a team that has done it the right way, improving on their possession numbers, holding shots down, getting balanced scoring while the stars shine.  Florida's situation is complicated by their having to play in Buffalo on Friday night, meaning a late arrival in Washington for the Saturday night game.  What you see on paper you will see on the ice.

Posted by The Peerless at 8:24 PM No comments:

The Washington Capitals won their first home contest of the season on Thursday night as they rode a three-goal third period to break open a tight game and win going away, 6-2, over the previously undefeated New Jersey Devils at Verizon Center.

The scoring started in the first minute of the contest when the Devils’ Andy Greene tried to keep a loose puck from sliding out of the offensive zone.  His attempted keep-in was blocked by Troy Brouwer who recovered the puck and headed up the right wing.  Entering the Devils’ zone, Brouwer fired a shot at goalie Cory Schneider, who turned the puck aside, but right into the path of Alex Ovechkin stepping into the high slot.  Ovechkin collected the puck, cut across the middle, and wristed the puck past Schneider for his fifth goal of the season 34 seconds into the game.

That was how the score remained until Damon Severson tied it for the Devils at the 10:15 mark of the period.  Less than a minute later, though, Chris Brown untied it.  Brown fought through a check from defenseman Eric Gelinas along the right wing boards and fired a slap shot from the far edge of the right wing circle that flew past Schneider’s blocker to make it 2-1.

Severson tied the game a second time for the Devils at the 16:36 mark of the first period, but that would be the extent of the Devils’ scoring.  In the seventh minute of the second period the Caps took the lead for good.   Marcus Johansson started and finished the tie-breaking play.  Circling out from the left wing corner in the offensive zone, Johansson sent the puck down the boards to Brooks Laich.  Johansson continued his momentum into the middle of the ice where Laich found him with a backhand pass.  From the high slot Johansson took the Laich feed and wristed the puck past Schneider to give the Caps a 3-2 lead.

That would be the extent of the scoring in the second period.  The third period was all Capitals. Nicklas Backstrom started it less than a minute into the period jest by getting in the way.  He started it by digging the puck off the left wing wall where Alex Ovechkin picked it up.  Ovechkin fed Troy Brouwer, who relayed the puck to Matt Niskanen at the blue line.  Niskanen wristed the puck at the net, but on the way through it hit Backstrom and changed direction, eluding Schneider on the glove side to give the Caps a 4-2 lead.

Less than three minutes later, Joel Ward scored unassisted when he picked up a loose puck at the Capitals’ blue line, skated through center ice and fired a shot that went wide to the left of Schneider.  The puck caromed loudly off the end boards and caught Schneider napping.  The puck hit Schneider and settled into the back of the net for a 5-2 lead, ending Schneider’s evening in favor of Scott Clemmensen.

Andre Burakovsky’s wrist shot on a power play at 8:55 beat Clemmensen and ended the scoring for the evening, giving the Caps their final 6-2 margin.

-- The six goals scored against the Devils was the most scored by the Caps in the series between the two teams since they beat New Jersey, 7-2, on October 9, 2010.

-- Going into the game the Devils had outscored opponents 5-0 in the first period of their first three games, allowing no goals on a total of 30 shots.  The Caps scored twice on eight shots in the first period. The Devils scored first in each of their three games.  That streak ended 34 seconds into this game on Ovechkin’s goal.

-- The Caps recorded a power play in their third straight game, making them 5-for-13  (38.5 percent) over those three games.

-- The Devils had 28 shots on goal.  Damon Severson, our “player to ponder” in the prognosto, had eight of them and both Devils goals.

-- Marcus Johansson’s goal was his first game-winner since getting the game-winner in a 6-2 win over the New York Islanders last November 5th.

-- Mike Green might be down on the list of notables in this game, but he had a solid line tonight… two assists, seven shot attempts (led the team), two takeaways, and four blocked shots in 19:24 of ice time.  He is second on the team in points (5) and second in plus-minus (plus-3).

That’s the way it’s done.  Good opponent on a roll, get on them early, don’t let them get a lot of momentum, stand on their throats down the stretch.  The Caps got balanced scoring, solid defense, and timely saves from goalie Braden Holtby.  The Caps have now outscored opponents 15-7 over their last three games.  Their 5-on-5 goals ratio is 1.57, their special teams index of 121.1 (summing their 27.8 percent power play and 93.3 percent penalty kill) is third in the league, their 26.0 shots allowed per game is seventh-lowest in the league, and team goaltending is working to a .923 save percentage.  It hard to argue with the results so far, and this against some stiff opposition to start the season.  Just the set up the team needs as they close out their home stand on Saturday against the Florida Panthers before heading to the Canadian west next week.