“There are many ways of going forward, but only one way of standing still.”
-- Franklin D. Roosevelt

When Dmitry Orlov wrapped up his 2018-2018 regular season, he finished with a career high in goals (10) and had his second straight 30-plus point season (31).  He was a double-digit “plus” player for the second straight season (plus-10) and set a career best of more than 23 minutes in ice time per game.

Orlov was particularly snake-bit shooting the puck.  His three goals on 101 shots made him one of 18 players in the league with three goals or fewer on at least 100 shots on goal.  Worse, he had one goal on 75 shots (1.3 percent) over his last 65 games.  Nevertheless, the Caps were successful when Orlov recorded points, going 16-6-1 in the 23 games in which he did so (just slightly off the 20-6-2 record the Caps posted when he recorded points last season), while going 32-20-7 in the games in which Orlov was shut out on the score sheet.

And back to that fourth-straight 82-game season.  Orlov is one of four defensemen who, over the last four seasons, appeared in every game.  The others are Brent Burns, Drew Doughty, and Keith Yandle.  Since the NHL went to an 82-game schedule in 1995-1996, only John Carlson (five) and Karl Alzner (six) have appeared in all 82 games more times than Orlov (four) among Capitals defensemen.  Only eight defensemen have done it. 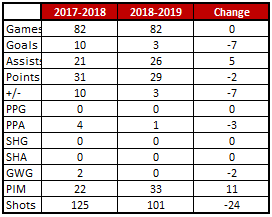 Fearless’ Take… Dmitry Orlov might have been in a season-long funk shooting the puck, but his assist total was up over last season, from 21 to 26.  He became just the fourth defenseman to record multiple 25-plus assist seasons with the Caps since 2005-2006.  John Carlson (7), Mike Green (5), and Matt Niskanen (3) are the others.  He and Carlson are the only Caps defensemen to post at least 20 assists in each of the last four seasons.

When the goals come so infrequently, the times when they do come are remembered, especially in a win.  And, for Dmitry Orlov, they were especially welcome.  In 16 games through Veterans Day to start the season, Orlov had yet to record a goal, coming up empty on 22 shots.  He had only two assists and was a minus-8 in those 16 games when the Caps hit the road to face the Minnesota Wild.  After dropping the last two games of the home stand they just completed, the Caps were looking to get off to a fast start against the Wild, and Orlov provided the spark.

The scoring play started with Andre Burakovsky feeding the puck from his own blue line to Lars Eller at the red line.  Eller skated down the right side and around the back of the Wild net.  Coming out the other side, Eller skate the puck all the way to the offensive blue line before turning and feeding Orlov coming off the left wing wall.  Orlov stepped up, and from the left wing faceoff dot he ripped a shot that beat goalie Devan Dubnyk high on the far side to give the Caps a 1-0 lead 6:33 into the game.  Neither the Caps nor Orlov were done in the first period.  Taking a tip pass from Evgeny Kuznetsov as he was exiting the defensive zone, Orlov got a head of steam as he skated the puck into the Wild end.  He stepped around defenseman Matt Dumba in the left wing circle and sent a pass to the top of the crease where Tom Wilson redirected it in for his first goal of the season with 27.4 seconds left in the period to make it 2-0.

The teams exchanged goals in the second period when Orlov appeared on the score sheet again in the third period.  Joel Eriksson-Ek overskated the puck along the wall in the offensive zone, and Alex Ovechkin took advantage, scooping up the puck and skating down the left side leading a 3-on-2 break.  Entering the offensive zone, he took it to the top of the left wing circle, and as Tom Wilson was heading to the net, Ovechkin slid the puck behind him to Orlov on the right side for a one-timer that beat Dubnyk cleanly on the near side to make it 4-1, 7:23 into the period.  T.J. Oshie scored to make it 5-1 just over two minutes later, and the Caps coasted to a 5-2 win.  For Orlov, it was his only two-goal and only three-point game of the season.
Game to Forget…  January 15th at Nashville

Things were going from bad to worse for the Caps as the schedule moved to mid-January.  After beating the Boston Bruins to extend a winning streak to three games, they lost in overtime to Columbus to break the streak, and then they dropped a 4-1 decision to St. Louis before heading to Nashville to face the Predators the following night.  If things could get worse, they did for the Caps, who found themselves trailing, 3-0, barely 21 minutes into the game.  Dmitry Orlov was on the ice for two of those three goals, which pretty much ended the competitive portion of the contest.  The Caps did threaten to make a game of it when Nicklas Backstrom scored on a power play seven minutes into the second period, but Nashville scored shorthanded five minutes later.

Less than three minutes after that goal, the Caps – Orlov in particular – got caught gambling.  Andre Burakovsky forced a pass in the direction of Orlov, who was pinching in from the left side.  The pass was broken up, and off a 2-on-1 break the other way, Rocco Grimaldi scored on a backhand spinner that made it 5-1 in what would end as a 7-2 Nashville win.  Orlov was on ice for four of the seven Nashville goals and finished a season-worst minus-4, the first time in his career he finished with as low a plus-minus rating.

Postseason…  The odd part of Dmitry Orlov’s postseason was not in failing to record a goal on ten shots in seven games.  That ship sailed in the regular season.  The odd part was that the Caps were 1-3 in the four games in which he recorded points (an assist in each game), 2-1 when he was blanked on the score sheet.  He was a minutes-eater, though.  His 153:33 in even strength ice time was highest on the club, more than a dozen minutes more than recorded by partner Matt Niskanen (140:52).

Looking ahead… Dmitry Orlov will be entering the third season of a six-year/$30.6 million contract (and his first season with a modified no-trade clause) in 2019-2020.  He is one of three Caps defensemen signed through the 2022-2023 season, John Carlson (signed through 2025-2026) and Nick Jensen being the others.  Orlov will be poised to jump into or close to the top ten in a number of franchise statistical categories next season.  His 69th game next season would place him 11th among defensemen in team history (Joe Reekie: 515 games).  With ten goals, he would jump over Robert Picard (42 goals) into tenth place.  With eight assists, he would jump into tenth place among Capitals defensemen all time (Rick Green and Matt Niskanen: 127, depending on how Niskanen’s status with the team shakes out).  With 24 points he would pass Al Iafrate (176) for tenth place among defensemen, again depending on how the status of Niskanen (12th place/156 points) is resolved.  He is already tied for tenth all-time among Caps defensemen in plus-minus (plus-56, with Larry Murphy), and a season of plus-6 would catapult him to sixth-place, ahead of Karl Alzner (plus-61).  Two game-winning goals would allow him to jump over Niskanen and Picard (seven apiece) for tenth place in that category.

There appears to be some disconnect between Orlov under the eye test and his numbers this season.  While his numbers did slip some (and his goal scoring a lot), they are not significantly worse overall than last season.  But he looked like an inferior version of himself for much of the season (some of which might be a reflection of playing alongside Matt Niskanen, who has a sub-par season of his own).  Orlov will be 28 years old to open the new season, putting him squarely in his prime productive years.  He has become a lesser-known, if still foundational element of this team, which makes one hope that the 2018-2019 season was merely a “stand still” sort of year rather than the top of his development arc.