The Peerless Prognosticator is ON THE AIR!!! -- Game 49: Capitals at Islanders, January 18th

The Washington Capitals wrap up the pre-All-Star Game portion of their schedule, the symbolic half way point of the season, when they visit the New York Islanders at Nassau Veterans Memorial Coliseum on Saturday afternoon in a 1:00 start.  The Caps will look to build on an impressive win over the New Jersey Devils, 5-2, on Thursday night to take a two-game winning streak into the break. 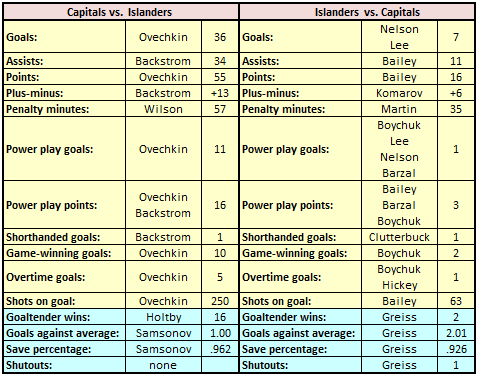 Warroad, Minnesota, has prepared a number of NHL players well known to Caps fans – T.J. Oshie (who was born in Everett, Washington, but who moved to Warroad and played high school hockey there), Alan Hangsleben, and Dave Christian.  Warroad’s contribution to the New York Islanders is forward Brock Nelson, now in his seventh year with the Isles.  New York took Nelson with the 30th overall pick of the 2010 draft, and he has been an overachiever relative to his draft position, ranking 10th in games played in his draft class (526), seventh in goals (142), 18th in assists (135), 15th in points (277), 26th in plus-minus (plus-10), and 18th in penalty minutes (197).  Over his seven-year career with the Isles, Nelson leads the active members of the team in games played, is second in goals, second in assists, and third in points.

This season, Nelson is producing at rates that are the best of his career.  He is on a pace to finish the season with 33 goals, 31 assists, and 64 points, all of which would be career highs.  He has been an especially durable player as well, missing only two games over the last six seasons, including this one to date.  Nelson has been very productive on home ice lately, going 8-6-14, plus-2, over his last 14 games at home, a run that includes four multi-point games.  In 26 career games against the Caps, Nelson is 7-5-12, minus-5.

Matt Martin is one aggravation away from jumping into the top ten in Islander history in career penalty minutes.  He passed Islander legend Brent Sutter for 11th place last Monday in a 6-2 loss to the New York Rangers, and he did it quickly.  On just his first shift of the game, 2:13 into the first period and seven seconds into his shift, Martin locked horns with the Rangers’ Brendan Smith on a faceoff just after Micheal Haley and Ross Johnston dropped gloves.  It earned Martin a five-minute major and a ten-minute misconduct (Smith earned the same), both players excused from further action for participating in a “secondary” fight after the first one finished.  The 15 minutes Martin earned gave him a total of 762 minutes in his Islander career, 21 minutes behind Gerry Hart for tenth place in team history.

This is Martin’s stock in trade.  In nine years as an Islander (he also spent two with the Toronto Maple Leafs), he reached the ten-goal mark once (he has 51 in 538 games as an Islander) and has never recorded as many as 20 points.  He does have four seasons topping 100 penalty minutes, although he has been relatively behaved this season, recording only 14 penalty minutes in 33 games apart from his outburst against the Rangers.  In fact, Martin has penalty minutes in only three of 34 games to date, another 12 minutes against Chicago on December 27th and a minor penalty against New Jersey on January 2nd.  On the other hand, that is 29 penalty minutes in his last 11 games.  Martin is 3-2-5, minus-1, in 32 career games against Washington with 44 penalty minutes.

Eight skaters have dressed for all 46 games played by the Islanders to date, and Anthony Beauvillier is the youngest of the group at age 22.  Beauvillier was taken with the 28th overall pick in the 2015 Entry Draft by the Islanders and is already in his fourth NHL season with the club.  He had a good rookie season in 2016-2017, posting nine goals and 24 points in 66 games, ranking in the top-25 in both categories among rookies.  He followed that up with a solid sophomore season, going 21-15-36 in 71 games in 2017-2018.  But those 21 goals that season are a career best; he seems to have plateaued on his career arc for the moment.  He slid to 18 goals in 81 games last season, and his 12 goals in 46 games so far this season put him on a pace to match his career high of 21. 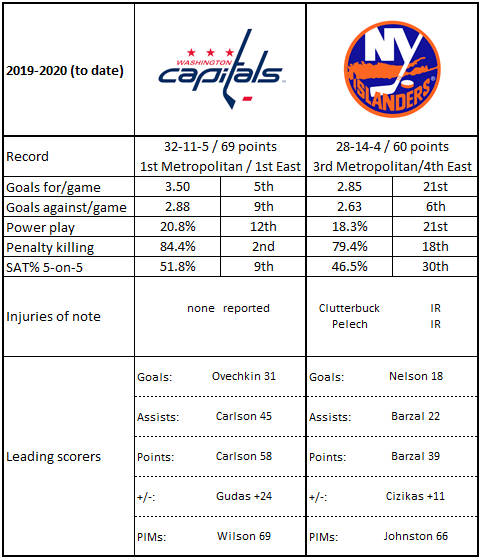 1.  The Islanders net goal differential on the power play at home (plus-7) is tied for third-worst in the league, ahead on only Montreal and San Jose (each at plus-6).

2.  No team spends less time per game on the power play than the Islanders (3:36), a product of having the fewest opportunities per game in the league at home (2.08).

3.  Only Vancouver and Pittsburgh have allowed fewer first period goals on home ice (13 and 12, respectively) than the Islanders (14).

5.  The Islanders have trailed on home ice after one period only four times this season (2-2-0).  Only Vancouver has trailed after 20 minutes less frequently (twice – 0-2-0).

1.  The Caps have eight wins on the road when leading after one period.  Only Toronto has more (nine).

2.  Carrying on in that vein, the Caps have 11 wins on the road when leading after two periods.  Again, that is second in the league.  Only Colorado (12) has more.

3.  Washington has scored 33 third period goals in road games this season, most in the league.

4.  Shot matter for the Caps on the road.  They have ten wins when outshooting opponents in their building, most in the league. And, only three teams have fewer regulation losses in road games when being outshot than the Caps (three): Chicago (once), St. Louis (twice) and Dallas (twice).

Very soon, Thomas Greiss will dress for his 188th game as a New York Islander goalie.  When he does, he will jump past Tommy Salo into fifth place on the all-time list of games played by Islander goaltenders, topped only by Kelly Hrudey (241), Glenn Resch (282), Rick DiPietro (318), and Billy Smith (674).  And, while it will not come against the Capitals, Greiss will soon become the fifth goalie in team history to reach the 100 win mark (he has 98).  He is fourth in team history in goals against average (2.67; minimum: 50 games), and he is tops in save percentage (.916; minimum: 50 games).  Rather remarkable numbers for a goalie who has never seemed to take a firm grasp of a number one job in any of his four NHL stops (he has played for San Jose, Phoenix/Arizona, and Pittsburgh in addition to the Islanders).

Warroad’s other entry in this game is T.J. Oshie.  If the Caps were a high-performance automobile, you might think of Alex Ovechkin as the engine, Nicklas Backstrom as the steering and suspension, and Oshie as the transmission (tortured metaphor, thy name is “Peerless”).  Oshie is a player who plays in several gears – high, higher, and higher still.  He is that rare “energy” player who provides that energy without resorting to playing outside the rules.  He plays above his weight class in terms of toughness, often goes into high-danger/high-reward areas to make plays, and scores important goals at important times in games.  Since he joined the Caps in the 2015-2016 season, he is second to Alex Ovechkin in goals scored (120 to 214 for Ovechkin), fifth in assists (121), fifth in points (241), fifth in plus-minus (plus-50), second in power play goals (40 to 82 for Ovechkin), fifth in power play points (70), and tied for third in game-winning goals (18).  Odd fact about those game winning goals… with his next one, Oshie will tie Craig Laughlin and Sergei Gonchar for 22nd on the all-time franchise ranking.

Oshie has been a bit streaky of late.  He had a stretch of six games in which he recorded a lone assist, and then he followed that up with three goals and three assists over a four-game span.  He goes into Saturday’s game without a point in his last three games.  Oshie has not scored a goal on the road since he potted one in a 5-2 win in Tampa over the Lightning on December 14th, a streak of six road games without a goal.  Oshie is 11-14-25, plus-9, in 24 career games against the Islanders.

With a win, the Caps will go into their eight-day break with the best record in the league and would be no worse than six points clear of the rest of the Metropolitan Division.  The Caps can put the Islanders, already reeling with a 6-7-2 record in their last 15 games, into a deep hole in the division standings by putting 11 points between themselves and New York with a win in regulation.  The Caps still have the best road record in the league by wins (17, three more than any other team) and winning percentage (.729, the only team with a winning percentage over .700 on the road).  When you couple this with the Islanders’ 2-5-2 record on home ice in their last eight games, signs point to a Caps win.