The Peerless Prognosticator is ON THE AIR!!! -- Caps vs. Hurricanes, March 11th

The Peerless Prognosticator in ON THE AIR!!!

The Washington Capitals host the Carolina Hurricanes this evening in game that features two teams with entirely different perspectives on the playoffs. The Capitals – winners of six straight games – are playing for seeding and fighting for the top spot in the Eastern Conference, while the Hurricanes are simply fighting…

What is heaven’s name is that?!

I’m sorry, I know Fearless and Cheerless, but you are…

I can believe that…what’s with the car?

“Like it?...I done did it up just like the Mark Martin Go Daddy Hendricks Motorsports Number 5 car.”

No, but I take it you are…uh, what’s with the smiley patch?

“Uh, had some extra room on the jacket, and I ran out of sponsors, so…”

I see…well, the Hurricanes won’t be coming to town with smiley faces tonight, because – as we were about to point out before we took a trip to Talladega – the Hurricanes are fighting for their playoff lives. With 72 points in 67 games, Carolina is on the outside looking in at Buffalo and the Rangers tied for the last two playoff spots in the East, two points ahead of the Hurricanes.

As we were saying, the Hurricanes are having trouble gaining any traction in their schedule. Since the All Star Game they are 5-7-4 and have won consecutive games only once in that span, wins over Florida and Buffalo last week. The overall numbers look like this for Carolina: 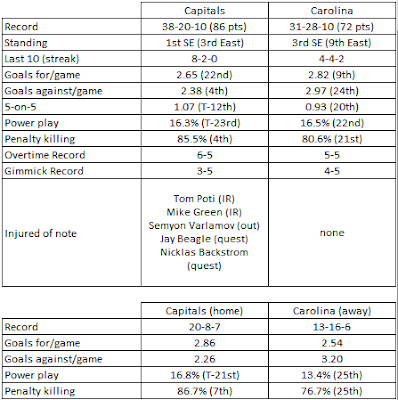 A team in Carolina’s position needs to have its big guns step up at this time of year, which brings us first to Eric Staal. The big center leads the Hurricanes in scoring, but he hasn’t had much of a line lately. In 16 games since the All Star break, Staal is 4-6-10, minus-3. Only one of the four goals came at even strength, and he has only one multi-point game in this span. It is not the sort of production a playoff contender needs from its top scorer. What the Caps will have to watch for, though, is Staal on special teams. He leads the team with 10 power play goals (three of them coming since the All Star break) and two shorthanded goals. He is 20-27-47 in 46 career games against the Caps, including 2-1-3 in four games this season.

Carolina is trying to capture some old magic in bringing Cory Stillman back for a second tour with the Hurricanes. The price to bring him back from Florida – Ryan Carter and a fifth round draft pick – wasn’t steep. But Stillman has contributed points in four of the six games in which he has played (2-3-5, plus-2). At age 37, Stillman might not be the player he was when he helped the Hurricanes to a Stanley Cup in 2006, but he does have that experience that playoff teams look to have on hand at this time of year. He has had a fair amount of success against the Caps over his career. In 44 career games he is 12-26-38, including 5-10-15 on the power play and three game-winning goals.

Caps fans are familiar with blueliners Joe Corvo, Joni Pitkanen, and Tim Gleason for the Hurricanes. One defenseman they might not have paid much attention to is Jamie McBain. In his first full year in the NHL (he played in 14 games last season), McBain is getting more than 19 minutes of ice time a night and is third on the team in scoring among defensemen (5-20-25). He has only a goal and an assist in six career games against the Caps, but given that he doesn’t log quite the big minutes of a Corvo, a Pitkanen, or a Gleason (all over 20 minutes average ice time), the fact that he has 19 blocked shots is worth noting.

Cam Ward seems a lock to get the call in this game in goal for Carolina. And he’s been all over the place with his play lately. Despite the fact that since the All Star Game Ward has a respectable 2.67 goals against average and a .919 save percentage, he is only 6-6-4 over that span. He has had some fine games – a 41-save effort in a 2-1 win over Florida and a 33-save effort in a 4-1 win over Pittsburgh. But he also allowed four goals on 25 shots in a 4-1 loss to New Jersey and four on 27 shots in a tough 4-3 loss to Montreal. Ward has goals against and save percentage numbers in his career against the Caps that are consistent with his recent performance – 2.59 and .920. But his win-loss mark is much more consistent with that kind of performance. He brings a 13-7-4 record against the Caps in to this game, although he lost his only decision this season, a 3-2 decision on December 26th.

The job title says, “defenseman.” And although plus/minus has its deficiencies as a measure of individual player effectiveness, it can’t be good when a “defenseman” has been a minus player in each of the past four seasons and is worst among the team’s defensemen in this statistic this season. Joe Corvo leads the Hurricanes in scoring among defensemen (10-24-34), but his minus-12 is evidence that he isn’t as gifted in his own end as in the offensive side of the game. More to the point for this contest, Corvo is a minus-8 on the road this season and is minus-8 in 17 games since the All Star Game. Corvo’s big contributions have been on the power play (he has either scored or assisted on 20 of Carolina’s 45 power play goals this season). Trouble is, that plays into the teeth of the Capitals’ strength, their penalty kill. Can Corvo contribute on defense? The game might hinge on the answer.

Marcus Johansson has quietly put together a respectable rookie year – 9-11-20, his nine goals ranking seventh on the team. His 3-5-8 scoring line over his last 15 games is respectable for what amounts to a third-line center. But he has been getting time on the top line with Nicklas Backstrom on the shelf with an injury. That means more ice time (on Wednesday he skated almost five minutes more than his average) and more responsibility. He did not seem as out of place in the role as he did in brief stints earlier in the season skating with Alex Ovechkin. And that is part of the learning process, which has another seminar scheduled for tonight.


1. Ready!...Fire…Aim!...Fire!...Fire Again!...Fire Some More!! Carolina is dead last in the league in shots allowed per game (that is, “most”). Allowing 33.5 shots per game puts undue pressure on their goaltenders. The Caps have averaged almost 33 shots a game in their last five. You have to think the Caps will get their chances. If Carolina manages to hold the Caps under 30, it would be a surprise, but it also would be a signal that they are getting the better of the play.

2. First in War, First in Peace, Just Get the First Goal. Carolina has the fourth best record in the NHL when scoring first (21-2-4). Not much analysis goes into this…don’t let them score first. But not an easy task for a club that has allowed the first goal in 40 of 68 games.

3. Keep Away. If Braden Holtby gets the call in goal, it would not be a surprise. He won his last two outings in impressive style, and he is 4-0-1, 0.62, .977 in his last five appearances. But keep in mind, too, that he has faced only 27.6 shots per 60 minutes. The Caps have done a pretty good job around him keeping teams from piling up shots. Carolina is not a team that ranks high in shots (30 a game, good for a tie for 17th), so if they start inching over 30, or if they are getting, say, more than 12 in the first or second period, it might be a problem.

In the end, this is as close to a rivalry as it gets in the Southeast Division. Carolina is the closest opponent on the map, but it’s hard to say that these teams have the nastiness in the rivalry that teams in the Northeast of Atlantic seem to have for one another. Still, there is no lack for motivation here. Carolina is up against it, sitting in ninth in the Eastern Conference and on the wrong side of that squirrely tie breaker with seventh and eighth place Buffalo and the Rangers that deducts shootout wins from the overall win total. The Caps, meanwhile, have the motivation of keeping pace with the recently struggling Philadelphia Flyers (who won last night to open up a four-point lead) in the chase to finish on top in the East.

That’s what should make this a playoff-like game, so long as the Caps show up to play. If they don’t, a desperate team might make the start of their weekend rather unpleasant. But that’s not going to happen, is it?