“Your best teacher is your last mistake.”
-- Ralph Nader

“The Vezina Trophy is an annual award given to the goalkeeper adjudged to be the best at this position as voted by the general managers of all NHL clubs.”

That is the citation for the Vezina Trophy.  Braden Holtby is the only goaltender in the NHL to receive votes for that award in each of the last three seasons.  He is the only goalie in the league to have received any first place votes for that award in two of the last three seasons.  He and Carey Price are the only two goalies to have been named finalist for the award twice in the last three seasons.  Holtby won the award in 2016 and finished second this past season.  That is an argument to support the contention that Holtby is the best goaltender in the game.  But if you do subscribe to that argument, you might have to accept that it comes with an asterisk, but we’ll get to that.

Holtby fell six wins short of last season’s all-time record-tying total of 48, but he did tie for the league lead with 42 wins (Edmonton’s Cam Talbot also had 42, but in ten more appearances).  It was in part a product of a slightly lower workload.  He appeared in three fewer games and logged more than 150 fewer minutes. 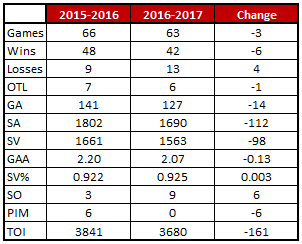 Odd Holtby Fact… This season was the first in his five seasons appearing in the majority of the Caps’ games that he did not record a penalty minute.

When the Columbus Blue Jackets came to Washington on January 5th, the stars were aligned in favor of the Jackets extending their winning streak to 17 games, one that would tie the all-time mark (Pittsburgh Penguins in 1992-1993).  They were on a roll, and they came to Washington facing a goalie against whom they had a measure of success.  Braden Holtby, who was facing the Blue Jackets for the first time in the 2016-2017 season, had an 8-2-2 record against Columbus, but he had a career 2.81 goals-against average and .902 save percentage against the Jackets,  Coupled with his having an awful game in his previous outing two days previous, there was suggested a vulnerability.

Whatever vulnerability there might have been was snuffed out in the first period when he stopped all 11 shots he faced while his teammates scored a pair of goals to take the early lead.  He stopped all ten shots he faced in the second period as the Caps doubled their lead, then shut the door in the third with eight saves on eight shots to complete the 5-0, 29-save shutout to end the Columbus winning streak.  At the time, it was only the second time in the season that Columbus had been shut out and the first time on the road.

That awful game Holtby had before facing Columbus came at home against the Toronto Maple Leafs.  It was hard to see coming, since Holtby was 6-2-3, 1.60, .943, with two shutouts in his previous 11 appearances, and he was dominating on home ice.  And, when the Caps scored on their second shot on goal just 74 seconds into the game, courtesy of Justin Williams, it looked as if it would be one more happy night for the Caps and their fans.

Then, the Leafs scored on their second shot, Nazem Kadri whacking in a loose puck on a power play.  Then they scored on their fourth shot, five minutes later.  The Caps tied the game late in the period, but Toronto scored again with less than two minutes left in the first period to take a 3-2 lead into the first intermission.  When the teams came out for the second period, Holtby was on the bench, his night over in what would be his shortest outing of the season – 20 minutes – having allowed three goals on eight shots.   The Caps did win the game, though, 6-5 in overtime.

The 2017 postseason was, by quite a margin, Holtby’s worst in five trips.  From 2012 through 2016, Holtby was the only goaltender in the league to appear in at least ten postseason games (he appeared in 46), post a goals-against average under 1.90 (1.87) and a save percentage over .935 (.937).  He played much better overall than his 22-24 record would indicate.  This year, though, he finished 11th among 23 goalies appearing in the playoffs in goals-against average (2.46) and 15th in save percentage (.909).  His even strength save percentage of .911 was 16th in that group.  He allowed three or more goals in six of the 13 games in which he played and had a save percentage under .900 in six games, four of them against Pittsburgh in the second round, three of them losses.  His home record was especially disappointing, going 3-4, 2.35, .914, even if his production numbers (2.60, .904) were worse on the road.  A team that finished fourth in scoring offense (2.77 goals per game, tied with Edmonton) should have fared better with a goalie with Holtby’s postseason pedigree, but for whatever reason, this year he could not find that spark.

Most folks think that goaltender is the most important position on the ice, especially when the games matter most in the postseason.  You do not have to have elite goaltending, necessarily (only 16 times, for example, has the Conn Smythe Trophy as the postseason’s most valuable player been won by a goalie), but you cannot have iffy goaltending in the postseason and make a deep run.  Perhaps Capitals Nation was spoiled by Braden Holtby’s superb four-year run in the postseason.  Whatever misfortune the Caps had could not be laid at his feet.  Over a five year stretch that included four trips to the playoffs, he was arguably among the best playoff goalies, in terms of playing his position, in the post-expansion era of the NHL

This year did not measure up, and it cast a shadow over his season and going forward.  Consider that over his last 27 appearances – regular and postseason – he was 15-11-1, 2.61, .906, with one shutout.  That was a long, slow slide to end the season.  It is the asterisk to the comment above that Holtby is arguably the best goalie in the game.  And given the uncertain nature of any predictions of any goaltender’s future performance, it will make the start of next season perhaps an anxious one for Caps fans.  We will find out if his late season performance was a lesson or a harbinger of things to come.