Last Cap to leave...turn out the lights

In a trade of Matts...Pettinger to Vancouver for Cooke.

We're guessing there will be a lot of talk about the Caps among the pundits the next day or two.
Posted by The Peerless at 1:40 PM 3 comments:

Yup...it's still not clear for what/whom, but tsn.ca is reporting Fedorov to the Caps on its trade ticker.

What did George McPhee sprinkle on his Wheaties this morning?
edit: the price is defenseman prospect Ted Ruth
Posted by The Peerless at 1:19 PM No comments: 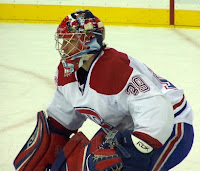 Goaltender Crisotbal Huet was traded by Montreal to Washington this morning for a second round pick in the 2009 draft.

This qualifies as a shocker on several levels...

- Montreal, with legitimate Eastern Conference championship -- if not Stanley Cup -- ambitions, have now turned over the keys to the car to a 20-year old rookie, Carey Price, who at this time last year was moving up from Tri-City in the Canadian junior leagues to Hamilton in the AHL. Yes, he backstopped the Bulldogs over Hershey for the Calder Cup champsionship, but this is quit a leap of faith for the Canadiens, who seem to be trying to catch lightning in a bottle once more (Ken Dryden, Patrick Roy) with a youngster.

- Olaf Kolzig is no longer the unchallenged number one goaltender for the Caps. Put another way, the club is not satisfed with the goaltending it's getting. Huet comes to Washington with a 21-12-6 record, 2.56 GAA, and .916 save percentage. He'll get action quickly.

- Huet is a rental (unless there is more to this breaking story). This is something we (meaning, well...I) would not have expected George McPhee to do. True, the price was rather modest -- a second round draft pick, but to pull the plug here, at this position, is a stunner. Huet is a UFA after this season, although Washington could be a good fit for him...he's 32, he could be the "bridge"goaltender between Kolzig and Macheslamovirth.

- Whither Brent Johnson? The Caps might be inclined to carry three goaltenders, but Johnson seems to be the odd man out, at worst. At best, he might be fighting Kolzig for time.

- Is there another shoe to drop?...Is there a Kolzig move yet to be made here? We would think not, given Huet's contract situation (although Kolzig is in the same one...), but today we're not going to say "not."
Posted by The Peerless at 11:57 AM 2 comments:

No, not to DC, but he is included in a rumor of a trade between Dallas and Tampa Bay...

We can be entertained once more by linesmen throwing Halpern out of the face-off circle...

The Peerless Prognosticator is ON THE AIR!!! -- Caps vs. Wild, February 26th

It’s trading day in the NHL, and by the time the puck drops tonight, there will be a lot of players filling out change-of-address cards at the post office.

Let’s take a stroll down memory lane as far as Caps deadline deals in the 21st century. Sit back and be astounded...

The is the kind of deal that agate type was invented for (look it up, it’s a print media thing). Combined, they played ten games in the NHL after this trade.

Washington acquired Jason Marshall from Anaheim for Alexei Tezikov and a 2001 4th round pick.

This was the last chapter of a trade gone bad. Not just bad, but fish wrapped in newspaper and left under the radiator for three days bad. Tezikov was obtained from Buffalo for Joe Juneau and the Caps third round pick in 1999...this was as much an effort to get the fishy smell out of the rink as anything. Marshall played nine games for the Caps before departing in free agency, which is more than Anaheim got out of Tezikov, who would play two more games in the NHL – with Vancouver.

Washington acquired Trevor Linden, Dainius Zubrus, and a 2001 second round draft pick for Richard Zednik, Jan Bulis, and a 1st round pick in the 2001 draft.

This isn’t the biggest draft in Caps history, but it might be the most discussed. Zednik was never so loved by a team until the trade. Trouble was, it was Caps fans expressing their love by wailing about how dumb it was to move Zednik. It was made worse by the Caps finishing the year 4-7-2 and getting eliminated by Pittsburgh in the opening round of the playoffs. Then, Linden ended up playing 28 thoroughly forgettable games for the Caps (4-3-7-, even) before being moved to Vancouver...which ultimately resulted in Boyd Gordon.

The Caps obtained Benoit Hogue on waivers from Boston.

“Benoit Hogue” is an anagram for “be no toughie.” Well, it was tough finding Hogue...he was here for only nine games before leaving in free agency.

Washington obtained Maxime Ouellet, and 1st, second, and 3rd round draft picks in the 2002 draft from Philadelphia for Adam Oates.

At the time – and for a while there after – this looked like grand larceny. Ouellet did not become the next goaltender for the Caps, and the draft picks yielded only Alexander Semin currently on the roster.

Washington obtained Sergei Berezin from Chicago for a 2004 4th round draft pick.

This was the only deadline day trade for the Caps in 2004, because everyone else had already been moved...Steve Konowalchuk, Jaromir Jagr, Peter Bondra, Sergei Gonchar, Michael Nylander, Robert Lang. It was such a frenzy that the Caps had already moved the very guy they got in the Jagr trade – Anson Carter. If you want to see more about these trades, go here. Klepis for Grier was merely an aftershock.

...oh, and the Caps picked up Jean-Luc Grand-Pierre on waivers from Atlanta.

Washington obtained a 2006 second round draft pick for Jeff Friesen.

To say Friesen was a disappointment for the Caps would be the very picture of understatement. He spent much of his stay with the Caps injured, and when he left he was 3-4-7, -11 in 33 games. The Caps took Keith Seabrook with the draft pick.

Washington obtained Kris Beech and a 2006 1st round pick from Nashville for Brendan Witt.

This was hardly a surprise. Witt had been seeking a trade roughly since the Harding Administration. He spent enough time in Nashville to catch a show at the Grand Ol’ Opry (17 games), then left for Long Island. The Caps selected goalie Simeon Varlamov with the draft pick.

...oh, and the Caps picked up Rico Fata from Atlanta on waivers.

Washington obtained Jiri Novotny and a 2007 1st round pick from Buffalo for Dainius Zubrus and Timo Helbling.

Zubrus, a perennial tease (“is this the year he breaks out” might have been his middle name) went off to Buffalo and found out about life without Alex Ovechkin. He did actually play some playoff games, which Ovechkin has yet to do. Novotny lasted long enough to take the tour on the Tourmobile, then went to Columbus. The Caps used the draft pick to trade down, eventually settling for a third round pick in 2032.

And so it ended, not with a bang, but with a “are we done here?”

With respect to being sellers, we hope so...

As for the game, the Minnesota Wild come into this one looking to regain the top spot they just relinquished to Calgary in the Northwest Division. The Wild have stubbed their collective toe lately to fall behind the Flames to sixth in the Western Conference. They’ve had a dry stretch of six games:

This is the first visit by the Wild to Washington since November 2002. On that night, Minnesota got goals from Antti Laaksonen, Stephane Veilleux, Andrew Brunette, and Pascal Dupuis, and a 21-save performance from Dwayne Roloson in beating the Caps, 4-3. Only Veilleux is still with the team. Of the Caps that took the ice that night, only Olaf Kolzig remains (Michael Nylander played in that game, but as we know, he took a journey that would bring him back to Washington for this season, although he is lost for the year to injury).

For the Caps, it is another game against a club whose style frustrates and bottles up “skill” teams such as the Caps. In many ways, it will be like looking at their last opponent, the New Jersey Devils (why not?...head coach Jacques Lemaire coached in Jersey from 1993-1998, winning a Stanley Cup there in 1995). And, Alex Ovechkin will be looking to get off the five-game schneid in goal scoring in his hunt for 60 on the season (even I’m tired of that Versus ad).

It’s another home game for the Caps. They are dwindling to a precious few – ten are left – and the Caps need to take advantage of them with two-point games…not one-point frustrations or no-point disappointments. Letting points bleed away here and there isn’t an option any longer, which is why they need to get nasty. There is a quote that comes to mind that shows up often on NFL films…it is Hall of Fame linebacker Lawrence Taylor on the New York Giants’ bench exhorting his teammates…”Lets go out there like a bunch of crazed dogs and have some fun!”

That’s what the Caps are going to do…