We Need a Name

It started last year when the Caps started winning. Fans started showing up in greater numbers, and a theme was rolled out -- "Rock the Red." Since then, Verizon Center has become one of the loudest, most crowded hockey venues in the NHL. It is, at times -- shoot, most of the time -- an eccentric mix of personaltities and practices.
You have "The Horn" and "The Voice." You have what might be the signature call of Caps Nation -- "Unleash the Fury" -- that generally comes in the late stages of the third period of home games. You have a new entry, the "It's all your fault" cheer, directed at the opposing goaltender in the midst of fishing pucks out of his net after a Caps score.
The whole thing is starting to resemble a college basketball atmosphere, where some arenas and fan groups make up some of the most intimidating places an opponent in any sport can play. A Caps game at Verizon Center is starting to take on some of the characteristics of, say, a Cameron Indoor Stadium, where the "Cameron Crazies" have raised intimidation of opponents to an art form. Or, for the sheer size -- 4,000 students in "Izzone" t-shirts ringing the lower bowl -- and volume, "The Izzone" at Breslin Center on the campus of my alma mater, Michigan State University. Or the "Rock, Chalk, Jay-hawk" chant at Allen Fieldhouse, home to the Kansas Jayhawks.

The legion of red-clad Caps fans packing Verizon Center needs a name, something to distinguish it from other hockey hotbeds, something to add to the intimidation factor, something opponents will have to look forward to (and dread).
Consider this your opportunity to weigh in on giving a name to our voice...
Posted by The Peerless at 3:23 PM 5 comments: 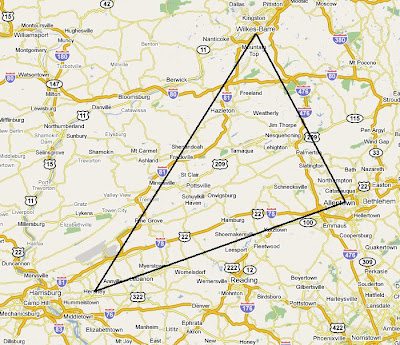 There are reports this morning that the Philadelphia Phantoms of the American Hockey League will be sold by Comcast-Spectacor to The Brooks Group, based in Pittsburgh. Since The Spectrum is being demolished as part of a redevelopment project in Philadelphia, the team needs a new home, too. There is a good possibility that the Phantoms' will remain in Pennsylvania, perhaps moving 60 miles up the Pennsylvania Turnpike into Allentown. Although, if they should relocate to Allentown, we hope the new hockey team can come up with a spiffier name than the Lehigh Valley Iron Pigs. Maybe the Allentown Ice Hogs.

But what this means for hockey fans in eastern Pennsylvania is that if proximity makes for rivalries, these intra-state versions will just get that much hotter.
Posted by The Peerless at 6:40 AM 1 comment: