Countdown to Opening Night by the Elements: Number 13

Lucky “13” of the elements Fearless is looking at?  Well…you be the judge. 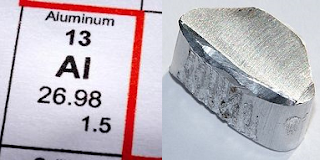 Aluminum is a rather common metal, the most common one in the earth’s crust, as a matter of fact.  Ah, but try finding it as a metal in nature.  Probably not going to happen.  Aluminum is simply too reactive on its own.  But you can find it in more than 250 different minerals.  Despite its reactivity, it does not easily ignite.

It has a long history, its being in evidence in ancient Greece and Rome as an astringent (a “styptic” – an astringent used in treating wounds).  It would not be until the mid-18th century that Louis-Bernard Guyton de Morveau, a French chemist and sometime political official, looked at “alum” (which is hydrated potassium aluminum sulfate, but they didn’t know that at the time, it was just this quartzy looking stuff) and decided to call it “alumine.”

Close…but not quite.  Sir Humphry Davy figured out that there was a metal in there and called it “alumium.”  Ooooh…almost.  Davy took another shot at it, calling the metal “aluminum,” but he didn’t get around to actually extracting the metal.  Friedrich Wöhler, a German chemist, almost did it, but he thought he had potassium.  He tweaked his experimental processes a bit, and in 1827 he isolated pure aluminum. Bet this would have gone much more quickly if Swedes were involved.

But back to aluminum.  It is a very durable element, resistant to corrosion.  It has no known function in biology, but it does lend strength to metals with which it is alloyed, making it critical in aerospace, transportation, and structural applications. In fact, it is among the most practical of elements, finding its way into any number of applications or products: packaging (cans or foil), automobiles, building construction, utilities (light poles, sign posts), protection (casings for electronic equipment and consumer products), heat sinks for electronic appliances, paints, musical instruments (generally guitars), lighting, athletic equipment, fireworks, and many more.

Oh, and here is an odd fact about aluminum.  You find that in some countries (Great Britain, for example) the element is spelled “aluminium,” with the extra “I” imparting an extra syllable in pronunciation.  There is a reason for that.  There is this organization that serves as the authority on chemical nomenclature, the “International Union of Pure and Applied Chmistry (IUPAC, for short).”  After Davy proposed “aluminum” as the name for the metal, IUPAC decided that “aluminum” needed to conform to the naming conventions for elements, that they end in “ium.”  So, “aluminum” became “aluminium,” which is its official spelling to this day.  It was the Americans, being the rebellious sort they are, that changed the name back, the American Chemical Society doing the deed back in 1925.

So, there it is.  The strange history of its name aside, a widely found element that is durable, reactive if not readily ignitable, capable of lending strength to a wide variety of metal alloys.  It is not a flashy element, but rather one found in any number of useful, everyday applications and products. It is not unlike a hockey player who is sturdy, durable, plays hard in the corners and along the boards (although seldom fights…perhaps just one career fight, in fact).  A player who is a meat-and-potatoes sort who isn’t flashy, but can contribute at both ends of the ice.

Aluminum (or “Aluminium”)… the “Joel Ward” of the elements of the periodic table.

Posted by The Peerless at 5:43 PM No comments:

Countdown to Opening Night by the Elements: Number 14

Before it was an adjective that named a geographical feature in northern California (Silicon Valley), “silicon” was a common, garden variety element of the periodic table.  It is an element rarely found in its pure form in nature, but it is found in gobs of compounds (“gobs” being a common measurement in chemistry).  That’s what makes it the eighth most common element in the universe, by mass, and that allows one to find it in silica (dioxides of silicon), silicates, and of course…silicone.

As silica, it is found most often in glass, but it is also used in the production of optical fiber for telecommunications, and it is used in the production of porcelain and stoneware.  It is also used in food additives and for thermal protection.  It is used to get into tight places in hydraulic fracturing of geological formations to extract shale oil and gas.  It is used in toothpaste as an agent to remove dental plaque.

Silicates are the heavy lifters of the silicon family of substances.  It is what makes up sand and is, in fact, the single most common substance in the earth’s crust.  It is commonly used in what is referred to as “Portland cement, “ which is the most common type of cement, used in building applications (concrete, mortar, stucco) and in grout.

Silicones are synthetic compounds of silicon that have applications in both adhesives and lubricants, sealants and insulation, in cookware, dry-cleaning and in medical applications.

The establishment of silicon as an element brought out the big guns of chemistry in the 18th and 19th centuries.  Antoine Lavoisier of France, the “Father of Modern Chemistry;” Sir Humphry Davy of England, Louis Jacques Thénard and Joseph Louis Gay-Lussac of France.  None, however, were able to isolate it in its pure form.  That would be left to Jöns Jacob Berzelius of….TA-DA… Sweden, in 1823.

The odd part of all that was that its discovery as a pure element came after it was named.  The somewhat unimaginatively named Thomas Thomson, a Scottish chemist, looked at it previous name – “silicium” – and decided it was not “metally” enough (we just made up that word).  In 1817 he dumped the “ium,” stuck on “on” (because it resembled boron and carbon), and voila!  “Silicon.”

What we have is a common element that has many applications in which it finds itself in tight places.  It can be a an abrasive or a lubricant.  It took a while for it to be established as a stand-alone element even though there had been a lot of work and speculation to establish it as such.  Sounds like a player who might often throw himself into tight places on the ice, who might be a bit abrasive and more inclined to throw his body around than his size would suggest, who might be shifty and slippery enough to escape harm, and who spent a long time establishing himself as an NHL player.

Silicon… the “Mathieu Perreault” of the elements of the periodic table.

Posted by The Peerless at 3:45 AM No comments: