The Slow Bleed of the Washington Capitals Season

When the Washington Capitals beat the Toronto Maple Leafs on March 16th, they climbed to within two points of a wild card spot in the NHL playoffs.  The Caps have not been more than two points out of a playoff spot on any day since.  However, they have not held one of those wild card playoff spots in that span, either.  While they have, at times, found themselves tied with one or both of the wild card teams, the Caps did not possess any end of season tie-breakers that would have vaulted them into one of those wild card spots.  Here has been the progression over the last 18 days: 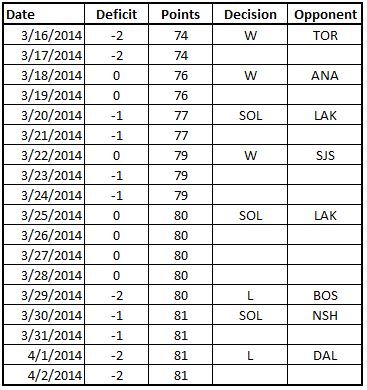 It serves to show how difficult it is to make up even a few points in the NHL that features the possibility of the "three-point game."  It is the slow bleed of the Caps' 2013-2014 season.
Posted by The Peerless at 6:36 AM No comments: