The Peerless Prognosticator is ON THE AIR!!! -- Game 78: Hurricanes at Capitals, March 30th

The Washington Capitals wrap up the March portion of their schedule looking to extend their winning streak to what would be a season-long six games when they host the Carolina Hurricanes on Friday night at Capital One Arena.  With ten wins in March and a 10-3-0 record, the Caps have already tied their highest monthly win total of the season, having gone 10-2-2 in December.

On the other side, the Hurricanes are hanging on to hope by the most slender of threads.  As of Thursday morning they trail the New Jersey Devils for the second wild card spot by nine points with ten points still available (five games) on their schedule.  Since the Devils play the Pittsburgh Penguins on Thursday night, the ‘Canes might be eliminated by the time the puck drops on 7th Street on Friday.

If Carolina is eliminated, they have the 2018 portion of the schedule to blame.  They completed the 2017 portion of their schedule with an 18-13-7 record, one point behind the New York Islanders for the second wild card spot.  Since then, however, Carolina is 16-19-4, the tenth-best record in the Eastern Conference since January 1st.

But there is some cause for hope, if only for the two players who lead the team in goal scoring in the new year.  Sebastian Aho, a 21-year old with 27 goals in his sophomore NHL season, has already surpassed the 24 goals he had last season for Carolina as a rookie.  Of that total, 16 of them have been scored in 35 games since January 1st.  He has ramped up the pace of his goal scoring as a product of more efficient shooting.  He is one of 11 players in the league who, among players with at least 25 shots on goal, has a shooting percentage better than 20 percent (16-for-78/20.5 percent).  Five of those 16 goals since January 1st were on power plays, the highest total on the team in that span.  Looking back on his entire season to date, he has been quite consistent on a month-to-month basis.  From November through the March schedule to date, Aho has recorded either five or six goals in each month (this after going without one in ten games in October).  The problem he has, which is not so much his as the problem with a young team without enough developed assets, is that his goal scoring doesn’t yet matter quite enough.  Carolina is just 14-8-2 in the 24 games in which he scored a goal this season.  He is 4-6-10, minus-1, in seven career games against Washington.

Teuvo Teravainen. only 23 years old, is right behind Aho in goal scoring in the new year with 14 in 39 games.  The production propelled him to the highest goal total of his five-year career (23), extending his uninterrupted year-to-year progress in raising his goal-scoring totals (none in three games in his rookie season, followed by four in 34 games, 13 in 78 games, 15 in 81 games, and the 23 in 77 games this season).  He weathered a dry spell in which he had just two goals over a 19-game span from early-January to mid-February (he did have 11 assists) only to follow that up with ten goals in his last 18 games, even though he averaged just 16:39 in ice time over that stretch.  There is a distinct difference in his home and road performances this season, though.  At its root, there is a marked difference between home and road in his getting shots to the net.  He has 103 shots on goal in 39 home games, but he has only 71 shots on goal in 38 road games.  It explains, for the most part his having 14 of his 23 goals this season scored on home ice and only nine when away from his home rink, but it is not unusual in that over his career, Teravainen has 309 shots on goal in 137 home games and 240 shots on goal in 136 road contests.  He is 3-5-8, even, in nine career games against the Caps.

Carolina is very green on the blue line.  Of the six defensemen to appear in at least 50 games this season, four of them are under the age of 25.  Trevor van Riemsdyk is the oldest at age 26.  None is younger than Noah Hanifin, who turned 21 in January.  The fifth-overall pick of the 2015 entry draft jumped right to the big club on Opening Night of the 2015-2016 season and has been a fixture ever since.  No Hurricane defenseman has appeared in more games over the past three seasons than Hanifin (234), and although he would not be considered an unusually productive “offensive” defenseman (second in goals and third in points among that group over the last three seasons), he has four game-winning goals in that span, second only to Justin Faulk (eight) among defensemen, and he has 25 power play points, second only to Faulk (49).  This season, Hanafin appears to be coming out as a bigger offensive producer.  He leads all Carolina defensemen in goals (10) and points (31), and he has done it while averaging fewer minutes per game (18:48) than Faulk (22:15), Jaccob Slavin (22:31), or Brett Pesce (20:54).  The trouble is, though, Carolina is only 9-9-1 when he recorded a point.  Hanifin does not have a point against the Caps in 11 career games played against them, and he is a minus-4. 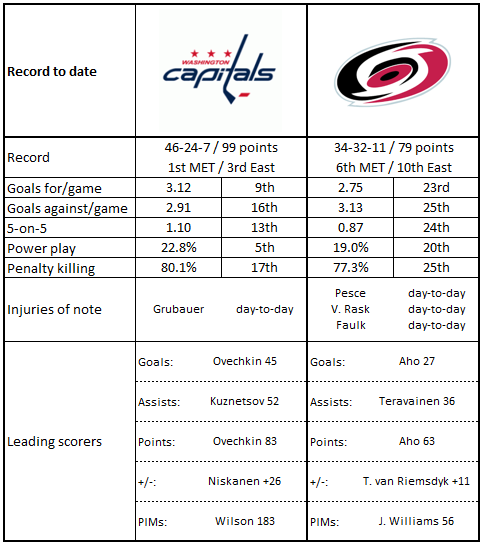 1.  A loss in this game for Carolina (or if the Devils beat Pittsburgh on Thursday night) would cement their ninth consecutive season without reaching the postseason, the longest dry spell in the history of the franchise dating back to when they were the Hartford Whalers.

2.  The Hurricanes might be the team to points to when arguing “faceoffs don’t matter.”  They have won a league-best 53.9 percent of draws taken.

3.  No team has been penalized less (6:13 minutes per game) or fewer times (216 penalties called) than Carolina.  They are the only team in the league having been charged with fewer than 200 minor penalties (199).

4.  If faceoffs don’t matter, than what are you going to say about shot attempts?  Carolina leads the league in shot attempts-for percentage at 5-on-5 (54.32).  They are third when ahead (51.39), second when behind (57.29), first when tied (54.19), and first in close situations (55.09, all numbers from NHL.com).  Small wonder that Carolina enjoys the best positive overall shot-differential in the league at plus-5.1 shots per game.

5.  On the other hand, the Hurricanes’ special teams need work, both of them being in the bottom half of the league.  They are 20th in power play (19.0 percent) and 25th in penalty killing (77.3 percent), one of seven teams with a power play under 20 percent and a penalty kill under 80 percent).

1.  Don’t count on this game going to a Gimmick.  Washington and Carolina are the only teams in the NHL not to have gone to the freestyle competition since January 1st.  The last time the Caps did it was December 28th (a 4-3 win over Boston that, curiously, was the second of a back-to-back set of games that ended in a Gimmick; the Caps lost to the New York Rangers, 1-0, the previous night), and the last time Carolina did it was December 12th (a 3-2 win over Vegas).

2.  The Caps have a very efficient power play in one respect.  They score one power play goal for each 7:09 of power play ice time they get.  That is fifth-best in the league (Tampa Bay is best at one goal per 6:32).

3.  Colorado (49.6 percent), Arizona (47.9 percent), and Columbus (47.5 percent) are the only teams other than the Caps with a power play faceoff winning percentage under 50 percent.  The Caps are at 49.4 percent).  Contrast that with the Caps and defensive zone faceoffs, where they are second-best in the league at 54.5 percent (Carolina, who seems to be at or near the top of all these sorts of lists, are at 54.7 percent).  Perhaps “The Beagle Effect.”

4.  Whatever you think of the arbitrariness of giveaways and takeaways, here is a club you don’t want to be in.  Montreal, the New York Islanders, Detroit, and the Caps.  These four teams are the only ones in the league charged with more than 800 giveaways and credited with fewer than 600 takeaways.

5.  What is it with the Caps and playing 4-on-4?  Last year, they were one of two teams not to score a 4-on-4 goal all season (Carolina was the other…go figure).  This year, they have two.  Only five teams have fewer.

Remember when Jeff Skinner was that fresh-faced, seventh-overall draft pick of the Hurricanes back in 2010?  Well, now he has played more games (574) than all but seven players in franchise history.  He is one of five players to reach the 200-goal mark in club history (he has 203).  He is 14th in assists (174) and tied with Blaine Stoughton for seventh place in points (377) for the franchise.  There are also a couple of odd facts attached to his history with the club.  He one of only three players in franchise history with at least 45 power play goals scored for the club, but no shorthanded goals (Sylvain Turgeon and Ray Ferraro are the others).  And, he tied for having the third-worst plus-minus in the history of the club (minus-93, with Ray Neufeld).

After posting a career best 37 goals last season, he has fallen off that pace with only 23 so far this season, which is what happens when you follow a season of having more than 13 percent of your shots find the back of the net (13.2) with one in which less than nine percent of your shots light the lamp (8.7).  He started well this season with nine goals in his first 16 games, but he fell off that pace rapidly thereafter and has only 14 goals in his last 61 games (a 19-goal pace over 82 games).  But, as it seems with a number of other Hurricane skaters, the goal scoring isn’t accompanied by wins.  In the 20 games in which Skinner has goals this season, Carolina is just 9-6-5.  Skinner is 12-12-24, minus-1, in 36 career games against the Capitals.

His contributions matter.  The Caps are 8-1-0 in games this season when he scored a goal, 19-4-2 in the 25 games in which he registered a point.  And he has not been a liability with more ice time.  Washington is 10-2-2 in the 14 games in which he logged more than 18 minutes of ice time.  His emergence as a force for good within the rules has not reduced his propensity for taking penalties.  He is second in the league with 183 penalty minutes, having drawn penalties in 36 of 73 games played this season (he had penalties in 32 of 82 games last season).  But among 351 forwards skating at least 500 5-on-5 minutes this season, Wilson ranks third in penalties drawn overall (87) and 12th in penalties drawn per 60 minutes (5.26; numbers from Corsica.hockey).  Wilson has some catching up to do against Carolina.  He is 0-1-1, minus-8, in 20 career games against the Hurricanes.

See that long thin pedal on the right?  That’s the gas…keep your foot on it.  The Caps, barring a total collapse, are almost certainly going to win the Metropolitan Division and play the first wild card to open the postseason (as of Thursday afternoon, that team would be the Columbus Blue Jackets).  In fact, a win over Carolina (should New Jersey beat Pittsburgh on Thursday night) would clinch the division for the Caps before they face the Hurricanes.  But the point is that this is no time to cut corners, take shortcuts, or coast into the playoffs.  Winning is always the object of the exercise, but doing things the right way, consistently and reliably, is what allows winning to take care of itself.  Facing a weaker opponent with little to play for tests that kind of discipline.  Taking care of business, from puck drop to final horn…that will be what to look for from this team on Friday night.