The Dream Game That Wasn't 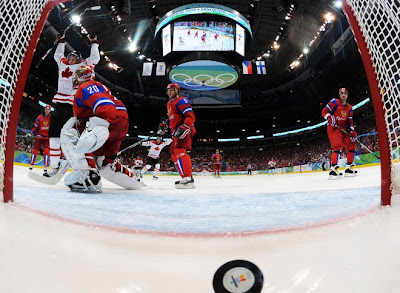 "I think how we start the game it's like small kids and big kids play against each other and big kids dominate."

That succinct summation by Alex Ovechkin after Team Canada defeated Team Russia, 7-3, last evening says it all. It was The Dream Game That Wasn’t. And for Caps fans it looked an awful lot like a certain Game 7 of a certain Stanley Cup Quarterfinal from 2009 when the “big kids” of Pittsburgh dominated the “little kids” of Washington on their way to a 6-2 win.

Like that other game from 2009, the competitive portion of this one ended early. Ryan Getzlaf got the home country started only 2:21 into the game, then Dan Boyle and Rick Nash scored less than a minute apart in the game’s 13th minute to put some distance between the Canadians and the Russians. Dmitri Kalinin got one back less than two minutes after Nash’s goal. But the dagger into the heart of the bear was probably Brenden Morrow – a fourth liner on Team Canada – getting a goal with less than two minutes in the first period to give Team Canada a 4-1 lead at the intermission.

And thus, the Dream Game was over.

-- The contributions the winners got from down the roster – six different Canadians share the seven goals last night; five different Penguins shared in the six goals they scored against the Caps in Game 7.

-- The absence of any impact from Alex Ovechkin. He had three shots last night (no points); he had three shots on goal in the Game 7 last spring (a late goal that didn’t impact the outcome).

It’s not as if Ovechkin was singularly absent, although as the “best player on the planet,” that absence was most keenly felt. His linemates – Alexander Semin and Evgeni Malkin – looked like junior players playing against, well, pros.  To be fair, the "second best player on the planet" -- Sidney Crosby -- was pretty much absent, too, but Canada proved a much deeper team than the Russians.

And just an aside… if anyone wants to make a bet with you on the San Jose Sharks winning the Stanley Cup, and they take the Sharks? Drive them to the ATM so they can take out some money. Because Evgeni Nabokov isn’t… money, that is.

And just another note of relevance to the Caps, the losses by Russia, Sweden, and Czech Republic mean that all five Caps (Ovechkin, Semin, Varlamov, Nicklas Backstrom, and Tomas Fleischmann) will be coming back to DC to rejoin their teammates, unless they stick around to take in the rest of the Games.

For the Canadians, their brain trust ended up looking like geniuses with this outcome. Getzlaf, who was the subject of much discussion concerning his ability to play at all with a high-ankle sprain, got the Canadians off and running with their first goal. He also had two assists. The decision to keep him on the roster rather than replace him with Philadelphia’s Jeff Carter looks like a stroke of genius.

As does the decision to keep Mike Green off the roster. There are those (count us among them) who thought choosing Dan Boyle over Green was a head scratcher. Boyle had a goal and two assists last night and now is plus-6 for the tournament. As for other defensemen, whose roster spots Green could have occupied, Duncan Keith had a couple of assists, and even Chris Pronger contributed a helper.

Coach Mike Babcock’s decision to mix up lines to create a more physical obstacle for Alex Ovechkin worked well. Deploying Rick Nash on the forward line and Shea Weber on the back line seemed especially effective.

And as for Roberto Luongo as a replacement for Martin Brodeur in goal, he was not brilliant, but he didn’t allow any soft goals that could have let the Russians back in the game.

24 hours ago, Canada was fretting that they’re hockey team would fail to medal and become the final mockery of the “own the podium” theme. Well, this morning their path to a gold medal looks a great deal brighter. The Swedes lost to Slovakia in a shocker. Finland disposed of the Czechs, and the Americans looked quite beatable even as they defeated the Swiss, 2-0. From goats of the games, Team Canada now has to be considered the solid, if not overwhelming favorite to capture the gold medal.

And that, for now, makes Canada pretty happy with Steve Yzerman and Mike Babcock.
Posted by The Peerless at 4:01 AM 2 comments: