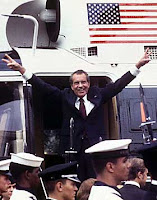 Well…that was much better.

Here is perhaps the most important single bit of information to take away from last night’s 3-0 win over the Florida Panthers. If you discount the empty net goal from Mike Green with 1:27 left, it is the first time the Capitals have won a game without the benefit of a goal from one of the “Young Guns” (Alex Ovechkin, Alexander Semin, Nicklas Backstrom, and Mike Green) since December 6th, when they defeated Toronto, 2-1, on goals by Karl Alzner and Milan Jurcina. Last night’s goals scored with a Florida goalie on the ice were scored by Brooks Laich and Viktor Kozlov.

OK…no shots for Florida in the third period. None. Kids, that only tells the half of it. From the time Karlis Skrastins fired a shot wide of the net (5:23 of the period), the Panthers were not credited with so much as an attempted shot until Richard Zednik had a shot blocked at 17:40 of the period. 12 minutes and 17 seconds of nothing. If you’re of a mind that Florida was a desperate team coming into this game, playing at home, then you have to give credit to the Caps for a masterful effort at defense, even if the Panthers aren’t the 1984 Edmonton Oilers.

Think Sergei Fedorov being in the lineup makes a difference? He won 10 of 13 draws, including six of seven, combined, in the offensive and defensive zones. You can’t use that high-powered offense if you don’t have the puck, and winning the faceoff is instant possession.

Speaking of faceoffs, the Caps did a much better overall job. Of six players who took more than one draw, five of them won more than they lost on the way to winning 32 of 55 overall.

John Erskine didn’t get a star, but he sure seemed to deserve one. Two assists, two shots on goal, three hits, three blocked shots, and a plus-2.

Kozlov was more active in the offensive side of things than just merely lugging the puck. Yes, he had the goal on a nifty little move when he adjusted the angle of his shot ever so slightly to leave Florida goalie Tomas Vokoun misaligned just enough on the wrist shot that eluded him, but Kozlov also had four shots on goal and eight attempts in only 13:51 of ice time. If he is actually a shooting threat, it could open things up a crack for Alex Ovechkin and Nicklas Backstrom when he’s on that line.

No one, perhaps, turned his game around more in the space of 24 hours than Tom Poti. Seven blocked shots, 5:20 of spotless penalty killing time (tops on the team), and no blemishes on his score sheet line.

Speaking of blocks, the Caps blocked more shots (20) than the Panthers had on goal (19). We get that Florida isn’t an especially gifted offensive team, but still, that’s paying a price. Ten different Caps had at least one.

Committing four minor penalties is probably in the acceptable range for this team (although all four of them being of the “obstruction” sort – two holding, two interference – isn’t), but drawing only one penalty? That really needs improvement.

Eric Fehr and Tomas Fleischmann have a combined two points in their last ten games (both goals). Neither had a point last night, and neither had a shot on goal. That has to improve.

Part of playing defense is not having to play defense. The Caps had only 11 turnovers (giveaways plus Florida takeaways).

With Donald Brashear not in the lineup, it seems that there was more balance in the ice time. No Cap had less than ten minutes. Only three had more than 20 minutes, all of them defensemen (Poti, Mike Green, and Jeff Schultz).

The Caps played as textbook a road game as you could draw up – keep things simple, work hard, take advantage of opportunities, get the crowd (such as it was) out of the game. Not every game has to be an effort to compile 60 minutes of SportsCenter highlights. In fact, chances are that in the playoffs, the Caps will be forced to play more games like last night’s than they will of the sort they played against Carolina last weekend.