We thought we'd take a look at the top eight teams in the East and look where the Caps stand relative to those teams in a number of general categories. 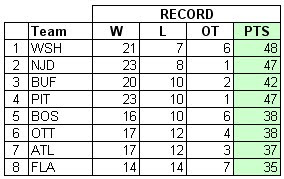 If the playoffs started today, which of course they do not, the Caps would get the Panthers in the first round. The Caps are 3-0 against Florida to date, outscoring the Panthers 17-7.

Next, scoring (ranked by goal differential): 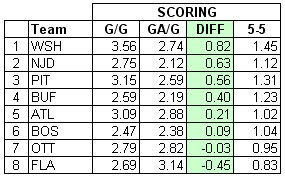 That one-versus-eight matchup between the Caps and Panthers looks even more grim for Florida, given that the difference between the Caps' goal differential and the Panthers' is a staggering 1.27 goals/game. 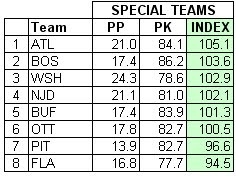 The surprise here is that Atlanta ranks so high on combined special teams play, that being a function of a surprisingly good penalty killing unit. One might also act surprised at the Penguins' low power play mark, but this has been a problem going back to last year. For the Caps, that penalty killing number needs to get over the NHL's "Mendoza Line" of 80 percent at some point. 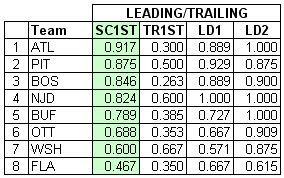 The Caps are the only team here that actually has a better winning percentage when giving up the first goal, but that is a product of the Caps scoring first so often (25 times in 33 games, more than any of the other seven teams). Other things to note -- with Atlanta and Boston, you can make money on who wins and loses just on whether they score first or not. Score first, they win. Give up the first goal, they lose. On the other hand, if New Jersey takes a lead into an intermission, they win.

And finally, the "grind" numbers: 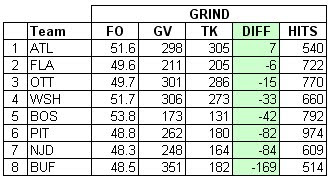 The grind stats are sorted by turnover differential as a rough gauge of how well the teams keep the puck. The giveaway and takeaway numbers are in the eyes of the beholder (or the official scorer), but that 351 number of Sabre giveaways (third most in the league), especially juxtaposed with the relatively low takeaway margin, should be cause for concern. It's also worth noting that five of the eight teams are below .500 on draws. And as far as hits go, no one hits like Pittsburgh (at least on the score sheet). They lead the league by a wide margin (Carolina is second, 45 hits behind the Penguins). You might not have expected this from a team with such top-end skill as Pittsburgh, but the number (subject to interpretation or not) is an indicator of a club that recognized the need to pay a physical price to supplement their skill in order to win a championship.