The Peerless Prognosticator is ON THE AIR!!! -- Game 6, Capitals at Flyers, October 20th

The Capitals face their stiffest test of the young season with a visit to Philadelphia to take on the Flyers. The orange and black, fresh off a 7-2 thumping of an Ottawa Senator team that the Caps struggled to subdue, bring a 4-0-1 record into this contest. If recent history is a guide, the Caps will resume their propensity for playing games in extra time. Last season all four games in the series went to extra time, two of them to the Gimmick. The Caps finished 2-0-2 in those four games.

This season the series takes a dramatic twist. The Flyers no longer employ the services of Mike Richards and Jeff Carter, both of whom were banished to the Western Conference. But a familiar face takes one of those roster spots, a player who wore the red, white, and blue and who, ten years ago, ushered in a new, promising day in Capitals history. Here are some of the things said about him in those warm summer days of July 2001…

"Make no mistake: The Jagr Derby is a one-horse race and Sather's riding it."

*****
“The Capitals just made their biggest, boldest and best move since acquiring Rod Langway on Sept. 10, 1982. In fact, it's even better then getting Langway. (Don't tell anyone, but Langway was a throw-in in that deal; the Caps were after Craig Laughlin all along.)

“The Caps got Jaromir Jagr. Who is only the best hockey player in the world.”

*****
“With one bold move, the Capitals have taken themselves out of the also-ran category and stepped boldly into the national spotlight and into the realm of Stanley Cup contenders.”

*****
“Talk about your marketing makeovers. In their first 27 years of existence, the Washington Capitals struggled to even register on the radar of national sporting consciousness. ... But thanks to yesterday's trade for Jaromir Jagr, the Caps suddenly have their first true celebrity, a major draw for ticket buyers and a virtually certain significant presence on national TV.”

*****
“Apparently, the Rangers weren't the only horse in the race. Either that or, while prancing obliviously along certain of victory, they got their doors blown off by a late-runner willing to dig in down the stretch.

“While Glen Sather was in midair yesterday, flying to a charity golf outing with old pal Harry Sinden and the legendary Bobby Orr, the Washington Capitals landed Jaromir Jagr ...”

And now, to the consternation of Penguin and Capitals fans, alike, Jaromir Jagr is a Philadelphia Flyer. It still hasn’t sunk in. Watching highlights of him has the hazy look of some weird PhotoShop experiment gone awry, an orange jersey worn where it doesn’t belong. Even the NHL doesn’t seem to believe it, his picture on his NHL.com web page taken with his smiling face and a Ranger jersey.

But here he is, in the early winter of his career, puttering along with 15 minutes and change of ice time a night, less than that skated by someone named “Matt Read.” He has an assist in four of the five games played so far for the Flyers. But his value might not be in the points he scores as much as the example is providing to teammates. There is the “Jagr Hockey School,” admission: free…as long as you’re willing to attend classes at 11:00 at night. Can a Caps fan imagine a Jagr having skated around an empty rink in the late evening in suburban Maryland with guys like Jeff Halpern, Dainius Zubrus, Brian Sutherby, and others in tow?

As for the rest of the Flyers, here is how the club stands as of action before Wednesday's games as they prepare to host the Caps: 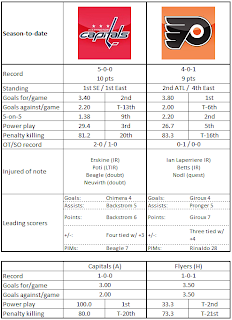 There really isn’t much of a secret to the Flyers’ early success. They go up on an opponent and force them to play catch-up. In four of five games so far the Flyers scored first (their last four, in fact). In no game have they trailed at either the first or second intermission. The NHL is a frontrunner’s league. Score first, and chances favor heavily your winning the game. The Flyers have done just that.

Twenty skaters have dressed for the Flyers so far this season. Sixteen of them have points. Of the four who do not, only Braydon Coburn – not known as a big point-getter – has played in all five games. Twelve players have goals, including someone with the improbable name of “Harrison Zolnierczyk,” who happens to own the last goal the Flyers scored, their seventh in a 7-2 win over Ottawa on Tuesday. We kid. Young Mr. Zolnierczyk hails from Brown University where he was Ivy League Player of the Year in 2010-2011. And his goal came in his first NHL game. Only thing is, he’s been returned to Adirondack in the AHL. One shot, one goal, one bus ticket.

The Early Bird Gets the Soft Pretzel

Four times the Flyers have scored first in a game. Twice, that was accomplished by Claude Giroux, of whom big things are hoped for, if not expected, now that Richards and Carter are gone. Three times he scored the Flyers’ first goal of the game. Giroux leads the Flyers in goals (four) and scoring (seven points) and, if you can call it a “pace” after five games, is on a pace to finish 66-49-115. In ten career games against the Caps he has had fair success – 4-2-6, minus-2, two power play goals. The thing is, though, right now he has four goals on 14 shots. We’re guessing a 28.6 percent shooting percentage isn’t going to hold up.

The Flyers are 24th in the league in hits, not exactly "bullying" in the Broad Street way. Defenseman Andrej Meszaros lead the team with 11. Five Caps have at least that many. On the other hand, the Flyers are second in the young season in fighting majors (five), although two players – Zac Rinaldo and Matt Walker – have two apiece. Think these two are in the Flyer tradition? Well, Rinaldo has a total of 28 minutes of ice time and 28 minutes in penalties. Fortunately for the Caps (and maybe for the Flyers as well), Rinaldo has been reassigned to Adirondack of the AHL. As for Walker, he has appeared in one game so far (Tuesday against Ottawa) and recorded two fights. He skated just under 16 minutes and recorded 16 minutes in penalties. Yeah, they fit.

It depends on what the meaning of “Bryz” is…

Almost lost in this is the play of the 51 Million Dollar Man, goalie Ilya Bryzgalov. He has made folks forget so farthe revolving door of goalies for the Flyers the past couple of years. A 1.99 goals against average and .927 save percentage with one shutout in four games will do that. Then again, Michael Leighton was 4-0-1, 1.57, .946 with one shutout in his first five games after joining the Flyers in 2009-2010. How did that work out? This is not to say that Bryzgalov is the talent equivalent of Leighton (the Flyers had better hope not, anyway), only that things can turn around for a goalie in a hurry. He has played pretty well against the Caps in limited appearances: 1-1-0, 2.53, .922. It might be worth noting that after allowing only one goal on 43 shots in his first two appearances this year (against Boston and New Jersey), he allowed seven on 66 shots in his next two (against Vancouver and Los Angeles)

Who IS this guy, anyway? He is second on the Flyers in scoring so far (2-4-6, plus-4). OK, he had a four point night against the Senators, but still. Actually, he is not without his honors – College Hockey America All-Rookie Team and Rookie of the Year; CHA Player of the Year and first all star team, and he was in the Frozen Four with his Bemidji State Beavers in 2009 in Washington, losing in the national semifinals. But come on…Matt Read?

Washington has allowed 11 goals in five games so far, and Roman Hamrlik has been on the ice for seven of them. It might not even be the seven that is of concern, but the “three.” The Caps have allowed three power play goals in five games, and Hamrlik has been on the ice for all of them. The Caps have exhibited extraordinary balance in terms of parceling out shorthanded ice time. No Cap defenseman has an average shorthanded ice time figure of more than two minutes a game (Karl Alzner, 1:57), and none have less than one minute a game (Mike Green, 1:15). Maintaining that balance depends on the burden of goals being spread in similarly even fashion. If one player is out there for a disproportionate share of power play goals against, keeping him out there would be a problem. We would like to think it’s just a phase, part of the learning process with a new team. But we’d like to see that process come to an end soon, too, especially against a team that is fifth in the league on the power play and tied for second at home.

1. Score First. Well, duh. But as much as any rink in the NHL, it matters in Philadelphia. All things flow from that. It would be a novel thing for the Flyers to face this season, it would take their fans down a notch or three on the rabid drool meter, and it would force Bryzgalov to play to keep his team close instead of protecting a lead.

2. Diffuse Abuse. It’s their rink, and they have a reputation to uphold – one for being royal pains in the bee-hind. They will check, they will be chippy, they will do things after the whistle. Many things flow from that, too, if the Caps retaliate. Cheap penalties leading to power plays is like opening a packet of “instant landslide” of goals. The Caps haven’t been shorthanded more than five times in a game yet this season (and only once as many as five times). They keep it to four or fewer against the Flyers, their chances for a win improve.

3. Don’t let the Flyers find their inner “Zolnierczyk.” Philly leads the league in offense, but much of that is attributable to scoring that comes from places where, frankly, it shouldn’t. Sure, Giroux has four goals. But Matt Read has two, Maxime Talbot and Sean Couturier have chipped in one apiece. Three defensemen have goals. Don’t let the support players get cheap fill-in goals.

In the end, this is the first genuine test of the season of a team that combines depth of talent and hard work (Pittsburgh came up short on the talent part with their injuries). If the Caps play like they did against Tampa Bay, or even against Ottawa, this game will be over quickly and not in a fashion Caps fans will like. Adding to the drama is that with the reassignment of Zolneirczyk and Rinaldo to the AHL, Brayden Schenn has been recalled (he was 4-4-8, plus-3 in four games at Adirondack). Another weapon. The Caps and Tomas Vokoun had better be alert…and ready for some after-60 minute hockey.