The Peerless Prognosticator is ON THE AIR!!! -- Game 41: Penguins at Capitals, January 11th

The Washington Capitals return home to the comfortable confines of Verizon Center on Wednesday to host the Pittsburgh Penguins. Looking at the Penguins these days, one half expects that in addition to Dan Bylsma behind the Penguin bench, there would be Drs. Benjamin Franklin “Hawkeye” Pierce, B.J. Hunnicutt, and Charles Emerson Winchester performing triage in the runway to the locker room.

The Penguin locker room is less a place to dress and prepare for games than it is a M*A*S*H unit these days. Of course there are the well-chronicled injury problems of Sidney Crosby, but there is quite a line of wounded behind him. With Crosby, James Neal, Kris Letang, and Jordan Staal out or with the potential to be out (the recuperative powers of Neal concerning a foot injury suggesting he took an unreported trip to Lourdes for the healing waters), there are 41 goals on the bench, more than a third of the Penguins’ output through Monday’s action (120 goals). With Monday’s action yet to start as we start writing this, only six Penguins have played in all 40 games to date, and two of those players – Neal and Craig Adams -- could see those streaks come to an end either Monday against Ottawa or Wednesday against the Capitals.

Although the Penguins have become accustomed to dealing with adversity – the continuing absence of Crosby and the intermittent absences of other players – Paul Martin, Evgeni Malkin, Brooks Orpik, Zbynek Michalek, Tyler Kennedy (all of whom have missed at least five games this season so far) – the burden appears finally to be having its effects on the Penguins.

Going into Monday’s play, Pittsburgh was in the midst of a four game losing streak – three of them at home – scoring only five goals in the process. It is part of a longer slide that has the Penguins skating to a 5-8-0 record in their last 13 games. As a result, Pittsburgh had dropped to fourth in the Atlantic Division and eighth in the Eastern Conference. With all of that, here is how the Penguins and Caps compare so far this season… 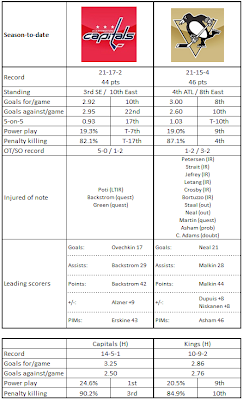 1. A potential top line of Evgeni Malkin, Chris Kunitz, and Pascal Dupuis would still be, if not formidable, balanced. All have more than ten goals (unless Nicklas Backstrom returns to the lineup, the Caps would ice no line with ten or more goals across). More to the point, these three have ten of the 18 game-winning goals for the Penguins through Monday’s games.

2. Marc-Andre Fleury has taken the decision in each of the four losses in the current Penguin streak. He has a goals-against average of 2.81 in those games and a save percentage of .878. What has been remarkable in those four games is that the Penguins allowed more than 25 shots only once (an average of 22.5 shots per game faced by Fleury).

3. Evgeni Malkin has certainly borne his share of the offensive burden. In his last dozen games he is 7-13-20 (2-4-6 on the power play). Here is the kicker. Those 12 games correspond to those missed by Sidney Crosby since his last appearance on December 5th against Boston.

4. Pittsburgh has found itself shorthanded 86 times on the road versus 54 times at home. Only Vancouver has a larger difference, road-less-home shorthanded situations, than the 32 held by the Penguins. And, they have allowed at least one power play goal in five of their last six road games.

3. Wednesday is the only day of the week so far on which Alex Ovechkin averages more than a point a game. He is 1-3-4 in three games so far.

5. Watch turnovers. Some of this is a matter of scoring and what the official scorer sees, but the Caps are eighth in the league in home takeaways, and the Penguins have the eighth highest number of road giveaways.

With as many injuries as the Penguins are facing these days, “role players” have to play bigger roles than perhaps their comfort levels would suggest. Tyler Kennedy is the kind of player that personifies the Penguins – he is a player of modest skill who plays hard in all three zones, can chip in some offense, and is a pain in the neck to play against. He also is without a point and minus-3 in his last four games after a stretch in which he was 2-5-7, plus-3 over five games. He might be the canary in the coal mine for the Penguins. If his streak without a point extends to five games, the Penguins have other guns, even with the injuries. But if he scores, chances are this is a good night for the visitors.

Has the coach turned into a pumpkin? Jason Chimera scored 11 goals in his first 26 games, a 35-goal pace for the season. In his last 14 games he has two goals (a 12-goal pace), none in his last seven. With so many pieces out, Pittsburgh is going to want to play things simple and tight, and a player like Chimera can make a difference in such games. He did have a goal in the last game these teams met, and he is a player who can use speed to take advantage of what could be a thin Penguin defense.

2. Did we say, “SHOOT THE PUCK?!?!?!” Pittsburgh has the widest margin, shots for per 60 minutes at 5-on-5, in the league. The Caps are 15th (numbers from behindthenet.ca). The Caps cannot let Pittsburgh dictate terms in this phase of the game.

In the end, the hallmark of Pittsburgh’s game is not so much offense, but their ability to keep opponents from spending much time in the Pittsburgh end of the ice. The Caps need to use a combination of advantageous line matchups and focus to try to tilt the ice in the other direction. They cannot be timid in this regard as they appeared to be in the 2-1 Penguin win on December 1st. Pittsburgh is banged up, the Caps are treading water. This game will be a matter of will. As in, “will the Caps show some ‘will’ tonight?” With no small degree of trepidation…