The Peerless Prognosticator is ON THE AIR!!! -- Game 52: Capitals at Senators, February 5th

Basking in the limelight of a shutout of the defending Stanley Cup champion Los Angeles Kings on Tuesday night is over for the Washington Capitals as they had to Ottawa to face the Senators at Canadian Tire Centre.

The Caps are looking to break a five-game road losing streak (0-3-2), all of the losses being of the one-goal variety.  Meanwhile, the Senators, who have been bouncing between a game under and a game over .500 for more than two months, try once more to get one-game over .500 when they host the Caps.

While the Caps have been having their recent struggles on the road, Ottawa is alternating wins and losses at home (3-3-0), serving as a reflection of their lowly standing after 49 games (sixth in the Atlantic Division, 11th in the Eastern Conference with a 20-20-9 record.  And, while the Caps’ road games of late feature one-goal decisions, games have been settled in emphatic fashion in the Canadian capital.  Three of the games were decided by three or more goals (a 2-1-0 record).

Ottawa outscored their opponents 22-19 in their six home games so far this calendar year.  Eleven players share in the 22 goals, led by Erik Karlsson and Mika Zibanejad with four apiece.  Karlsson has been a reasonably consistent scorer this season, recording points in 29 of his 49 games and ranking sixth overall in points among defensemen this season (12-23-35).  He has five points in his last five contests overall (4-1-5), but what jumps out about his game recently is his propensity to take penalties.  After recording only ten penalty minutes over his first 36 games, Karlsson has 20 penalty minutes in his last 13 games and has taken at least one penalty in eight of those 13 games.  In 16 career games against the Caps, Karlsson is 2-12-14, plus-1).

Zibandjad has not been nearly as consistent this season as Karlsson, but he does seem to be warming up of late.  He started the season with only three points (2-1-3) in his first 15 games befor peeling off 14 points in his next 15 contests (7-7-14).  Of late, Zibanejad is 4-4-8 in his last nine games and had a four-game points streak stopped in his last contest, a 2-1 loss to the New Jersey Devils.  He is 2-1-3 in eight career meetings with the Capitals.

Craig Anderson is the second-winningest goaltender in Senators franchise history (94, 52 wins behind Patrick Lalime).  His .921 save percentage is best in franchise history (minimum: 50 games), his goals-against average of 2.57 is fourth, and his 15 shutouts is second in Ottawa franchise history.  He had been humming along, not allowing more than three goals in 13 consecutive appearances, then he decided to play “Top Chef” and accidentally cut his right hand.  He is out indefinitely.

That would appear to leave the goaltending duties up to Robin Lehner.  Since Anderson’s adventures in the kitchen, Lehner has three appearances over which he is 1-2-0, 2.69, .916.  Respectable numbers under the circumstances and consistent with his career numbers (80 games, 28-33-12, 2.89, .914, 2 shutouts), but not great.  Lehner allowed two goals each of his last two appearances, which is quite an improvement over his season before that.  After going 3-0-1 in his first four decisions and working to a 2.10 goals against average and .939 save percentage, he went into a prolonged funk.  Over his next 13 appearances he was 3-8-1 (one no-decision), 3.69, .885.  Perhaps having been thrust into the number one role for the time being will improve Lehner’s focus, but his season to date is uneven.  Washington is the only team in the league he has never faced.

Here is how the teams’ numbers compare overall: 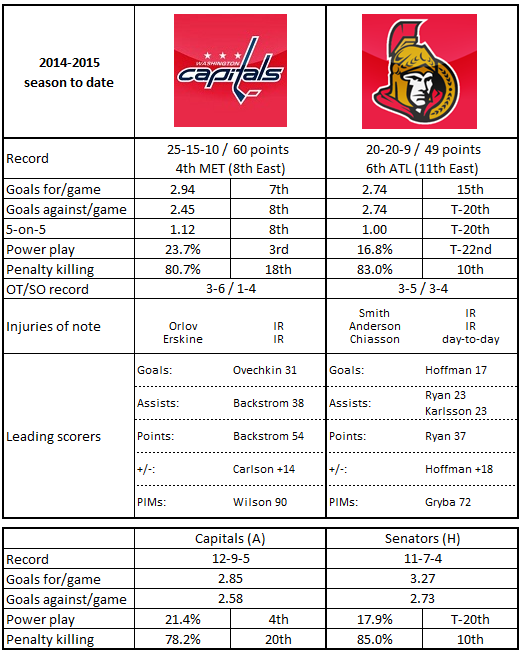 2.  Underneath, Ottawa has more success in blowout decisions (7-4 in decisions of three or more goals) than they do in any other scenario (13-16-9).

5.  Ottawa also struggles in possession.  Starting at the top, the Senators have allowed the fifth-highest number of shots on goal per game.  Their Corsi-for percentage at 5-on-5 is certainly respectable (49.6, 19th in the league), but they are relying too much on goaltending, given their shots differential, to keep things close (minus-4 goal differential at 5-on-5, .926 save percentage at 5-on-5, numbers from war-on-ice.com).

2.  Despite having played the tenth-most number of road games this season, Washington has the sixth-fewest number of power play opportunities.

4.  The Caps have the third best net goal plus-minus on the road this season (plus-11), behind only the New York Rangers (plus-12) and the Nashville Predators (plus-17).

5.  Although he’s not here any longer, it might interest you to know that Liam O’Brien is still the forward with the most games played (13) without being on ice for a goal scored against.

If one were asked which Senator led the team in goals and plus-minus, Mike Hoffman might not be the first name that comes to mind.  Hoffman is that player, though (17 goals plus-18).  He has had quite a first full season in the NHL.  It is not a product of a hot start (1-1-2 in his first eight games), and it is not a product of scoring in bunches.  He has been consistent in his contributions over his last 38 games (goals in 13 of them, points in 21).  And here is an odd fact about him.  That plus-18, which is tied for ninth among all forwards in the NHL, is a product of what happens in the defensive end.  Of 280 forwards having played in at least 40 games so far, only 34 have been on ice for fewer goals against than Hoffman (21 goals).  If he is out there, and the Caps score, write it down.  This will be only his second career game against the Caps, and he will be looking for his first point against them.

The Capitals just dispatched an opponent – the Los Angeles Kings – against which they had lost their previous seven games.  Now they take on an opponent who has been just as troublesome.  Before beating the Senators by a 2-1 margin on December 22nd, the Caps had lost seven straight games to Ottawa (0-6-1).  What has characterized all of the last eight games against Ottawa is the Caps’ inability to score.  They have a total of 12 goals in those eight games and recorded more than two only once, a 6-4 loss to Ottawa in November 2013.

The Caps will have advantages in this game.  They are coming off arguably their most complete effort of the season against a stout (if struggling) opponent, they are a decent road team (tied for third in road wins in the Metropolitan Division), and they are facing a goaltender who has no live book on the Caps.  On the other hand, there is the “trap” element to consider.  This is the first of a back-to-back set of games, and tomorrow’s game is against the Anaheim Ducks, a team tied for the most wins in the league and coached by former Caps’ bench boss Bruce Boudreau.  Peeking ahead is a concern here.  Nevertheless, the Caps might finally break the spell the Ottawa Senators have over them as far as scoring goes.