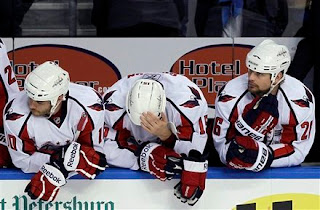 The Caps went quick and quiet in Game 4 of their Eastern Conference semifinal against the Tampa Bay Lightning, bringing another season to an early end. The Caps fell behind, again, and when the Lightning opened a 3-1 lead in the second period, you could probably rest easily that there would be no “Miracle on 34th Street” comeback. Tampa shut things down, added to their lead in the third, eventually getting a late goal that would make the margin 5-2 before a late window dressing goal for the Caps made a 5-3 final seem closer than it was.

And so, the Capitals’ summer starts early once more. One gets the feeling that a moment has passed, the best opportunity for the Caps to win a championship, at least for the near future. They had a mix of players in their prime and enough veteran leadership to give fans real hope that this, finally, would be the year.

But in the end, this Caps team was no different than any other you might compare it to over the 36 years of this franchise’s history – underachievers or unhealthy, unimaginative or unable to beat a team it should have beaten. It is early, perhaps too early to render a fitting judgment on this squad and its place in Caps history, but we cannot help thinking that this franchise is all sizzle and no steak. Thirty-six seasons of this will leave that impression. The current edition has the great videos, big web presence, and is steeped – marinated, in fact – in the whole idea of the “experience.” But the hockey? Twice in 36 years the Caps have moved past the second round. This year’s team was just another team that didn’t, indistinguishable from the 2009 team, the 1994 team, the 1991 team… 1988… 1986… 1984.

Oh, the players will say all the right things in all the right tones about how disappointing this is to them personally and how they let down the fans. Coaches will talk of what went right and what didn’t. Management will try to spin this as just another step on the road to success.

No, the Caps are what they are. Swap out the names Carpenter and Gartner for Ovechkin and Backstrom. Switch out Larry Murphy for Mike Green. Scorer for scorer, grinder for grinder, goalie for goalie. This club is, in the end, no different than any of those teams in the 1980’s that should have won, and didn’t. You can talk about luck, or bounces, or health (and this club did – before this post season even got started), but in the end it isn’t any different from the teams of the 1980’s or 1990’s or the early 2000’s that should have done better, and didn’t. Over all those years, the players have seemed like genuinely good guys, guys who wanted to win and who took it hard when they didn’t. Coaches were earnest folks who probably spent a lot of time trying to figure out what they had to do to squeeze out the last bit of effort that would get their teams over the hump. Management was diligent in trying to assemble rosters that could make deep playoff runs.

But in the end, two of them did. Two. This team wasn’t one of them. And we are left to wonder, “OK, now what?” As a fan, we were angry last year over what happened to the Caps in losing to the Canadiens after building a 3-1 series lead in the first round, saying that “the season stands as a failure. Period, and point blank.” This year, it is more a resigned sigh. This is what Caps teams do. They tease, they have flashes of brilliance when snow is on the ground. But when push comes to shove, they do not push enough and do not shove enough. They sputter, they make mistakes in the simplest parts of the game, they lack the killer instinct. They go quietly when the trees blossom.

Somewhere, someone is going to be tempted to say, “it was a hard lesson to learn.” Wrong cliché. The same lesson of beating back adversity has been pounded into the Capitals for the past four seasons, but they just don’t seem capable of learning it. Teams out work, out-scheme, out-whatever the Caps. Whether it is the Islanders or the Rangers, the Penguins or the Flyers, or last year’s Canadiens or this year’s Lightning, for 36 seasons it has been a case of the Caps not so much being beaten by better teams as much as they are losers to teams they should have cast aside.

It isn’t even anger-inducing. It does not seem to be worth that kind of emotional investment. It might not even be disappointing any more. It is expected. And even if the Caps make changes – on the ice, behind the bench, or in the front office – it hardly seems to matter. The Caps have had hall of famers skate for them and hall of famers in waiting. They have been coached by a pair of Murrays, a Wilson, a Boudreau. They have had a Poile and a McPhee making personnel decisions. It hardly seems to matter. The pieces change, the results are the same.

We’ll look forward to the draft, to development camp, to training camp. We’ll be at games, and we’ll probably be writing about them. But purely as a fan, making an emotional investment in the Caps looks more and more over time like a fool’s errand. There is no romance in being a fan of a lovable loser. Losers are lovable only to fans who do not follow that particular team. We doubt Cubs fans think of their team as “lovable” losers, and we are quite sure that New England wasn’t in a loving mood watching the Red Sox come up short year after year.

In the 1980’s the Caps disappointed their fans with early playoff exits, but looking back they probably got about as much out of their talent as they could. This edition of the Caps – the one that now has two playoff series wins in six tries over the last four years (both over the offensively incompetent Rangers) – looks more like a club that has squandered both opportunity and talent. They were passed by in 2009 by the Penguins, passed by in 2010 by the Blackhawks, and passed by this year by their own division rival in the Lightning. That is pretty much the definition of the phrase, “moving backward.” The Caps would appear to have the talent to be a reliable playoff contender for years to come, and we have the uneasy feeling that this is quite good enough for club management in that it will keep the turnstiles turning. But a championship contender? When we read that “anything can happen in the playoffs” or that such and such a team is “hard to play against,” we’re not put in the mind that it is a championship level team doing the talking. Those kinds of teams aren’t victims of bad luck. They make their luck. They are the teams that others find it difficult to play against. Teams like the Caps – who can be quoted as saying results are as much the product of luck and the initiative of the opponent – don’t win.

The best chances of that seem to be in the rear view mirror. It is hard to envision this club being given any serious consideration as a genuine Stanley Cup contender next season with its having failed to meet expectations in the past few years. Oh, they’ll make the playoffs, but they seem to be settling into that “also ran” status in which they will reach the playoffs, perhaps win a round, but who will inevitably run into a “hot goalie” or a coach with a better scheme, or plain bad luck.

These aren’t evil people; they haven’t been over the last 36 seasons. They care – we do not dispute that. No one gets up in the morning and ponders, “how can I screw up on the ice tonight?” Or “what mediocre talent can I get for this team?” Or “How can I make fans more miserable??” But after 36 years of relentless disappointment, made more bitter over the last few years precisely because of the talent on the ice, we’re left with asking “Why?”