The Sporting News: Ovechkin Player of the Year, Green to All Star Team 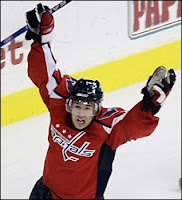 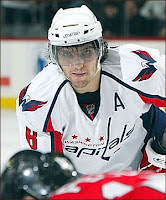 Alex Ovechkin earned the first of what promises to be several post-season awards, named Player of the Year by The Sporting News.

Alexander the Great, indeed. All Ovechkin did was score 65 goals, the most by an NHL player since 1996, win the Art Ross Trophy with 112 points and lead a charge by the Capitals from last place to a Southeast Division title.

Mike Green was named to TSN's all-star team as well, joining Nicklas Lidstrom on the defense.

Congratulations to both!
Posted by The Peerless at 1:44 PM 2 comments:

The "Continental" was a continuing sketch on Saturday Night Live focusing on a creepy self styled ladies man. The "Kontinental" is a hockey league.

James Mirtle covers the matter of the next step in the evolution of the Russian Super League and the driving force behind it -- Alexander Medvedev (the gentleman on the right, above).

One thing struck me right between the eyes when I took a look at the map to which Mirtle links in his column...

You remember those, don't you? When there were real rivalries in hockey?

...unless you're pining for a resumption of that rabid Capital-Panther duel next year, that is.
Posted by The Peerless at 6:28 AM No comments:

And now, we pick up the wingers with… 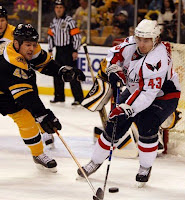 Theme: “the canary in a coal mine”

Coming into this season, Tomas Fleischmann had played a grand total of 43 games as a Capital. On that basis, there were probably a fair number of fans who had already concluded that Fleischmann did not have a future with the club – he was 4-6-10, -13, in two short stints with the club. Frankly, the club seemed on the brink of making a similar assessment last summer. Fleischmann went to training camp as a man without a contract, whereupon he played himself into a new one-year deal and onto the top forward line on opening night with Alex Ovechkin and Viktor Kozlov.

Fleischmann didn’t play like a top line forward. He managed one goal and eight shots in his first ten games...

What’s more, he averaged less than ten minutes playing time a game. For a player with Fleischmann’s skill set, who appeared to have cleared an important hurdle coming into the season – proving he could play at this level – it could have been demoralizing. His second ten games were marginally better (3-1-4, getting 14+ minutes a game).

But then, something happened…on February 24th, against Minnesota, Fleischmann had a pair of assists and was +4 in a 4-1 win. Over the next ten games, he would not register a single point, would be credited with only nine shots on goal, and would average less than nine minutes of ice time a game. As the team was entering the desperate phase of their playoff run, Fleischmann spent it largely on the bench. While Matt Cooke – acquired from Vancouver at the trading deadline – was getting considerable minutes providing some grit on the second line with Sergei Fedorov (another deadline acquisition) and Alexander Semin, Fleischmann was getting third and fourth line ice time.

Fleischmann was, in a sense, the canary in a coal mine as far as an indicator of the Caps’ position with respect to the rebuild. If this was a “preparation” season – getting youngsters ready for prime time next year by giving them minutes now, those minutes he got in those 40 games he played from November 23rd through February 26th would likely have continued. But when Fedorov and Cooke were obtained, Fleischmann spent more time sitting than skating. It was a signal that the Caps were ready to compete for that playoff spot now…and Fleischmann was not. He did manage a pair of goals and an assist in his last five games, but the character of his season appeared to have been defined.

These days, when fans are prone to make quick judgments about players and voice them in message board or blog forums, it would be tempting to conclude that Fleischmann played himself off the team, or that the Caps have concluded that others have passed him by. Well, there is the fact that the club re-signed him to a two-year contract. They see something there. This year was Fleischmann’s first full year as an NHLer. A lot of the time, it showed. But he also showed flashes of the puck-handling and playmaking skill that made him a top playoff performer at Hershey when the Bears won a Calder Cup.

Whether Fleischmann makes that next leap is now a question for next year. Competition for top-six forward time on this club will be tight, even if Fedorov and Cooke (both unrestricted free agents) are not re-signed. The club seems set on the left side with the Alexes, Nicklas Backstrom and Michael Nylander will hold down the center positions, and Viktor Kozlov will likely man the right side on the top line. That leaves Fleischmann to compete with Eric Fehr, perhaps Chris Clark, and other youngsters coming through the system for time on the right side on the second line.

This year was a very uneven one for Fleischmann, but not one that should have been unexpected, given his experience and circumstances. He dropped the ball, in a sense, after having been given a chance on the top line to start the season. But he played respectably, given his minutes, over the middle third of the season. However, when crunch time came, others would get the ice time. Considering all of that, Fleischmann earns a…