Sometimes you get the bear, and sometimes the bear gets you. As good as the previous week was, this one was not. Two games, two losses, and the Caps slink home with no points to show for their abbreviated road trip out west. And in an odd bit of circumstance, the Caps end the week with only one team in the East – Boston – nursing a longer losing streak than the two in a row suffered by the Caps. 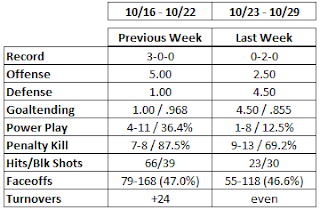 The Caps started the week holding the franchise record for consecutive wins to start a season – seven – and were aiming to become only the second team in Washington history in any sport to start a season with eight straight wins. The Redskins won 11 consecutive games to start the 1991 season. Any thought of the Caps trying to tie that record when they came home against Anaheim on November 1st were put away when a spunky Edmonton Oiler team bit them in the backside with a 2-1 win on Thursday (edit: uh, cuz?...don't you mean "close in" on that record?).

Ironically enough, the Oilers defeated the Caps’ next opponent – Vancouver – in the game just before the Caps visited Rexall Place. And after the Caps left that venue after the 2-1 loss, they went to visit Vancouver, a team that struggled to beat Minnesota in overtime before losing two in a row in the run up to their hosting the Caps. The Caps seemed to be the tonic for the struggling Canucks, for after scoring only two goals in their two straight losses, Vancouver lit up the Caps for seven in a 7-4 win. It made for a rough week, the end of which saw the Caps now in third place in the East behind Pittsburgh and the surprising Toronto Maple Leafs, and only two points ahead of Florida and Tampa Bay in the Southeast Division.

One period with three goals, the other five with a total of two. Not what one would call a balanced or, ultimately, an effective effort. The third and fourth lines were shut out on goals, and only Jason Chimera and Jeff Halpern recorded any points (an assist apiece). Not that the top two forward lines were all that sparkling, either. Alex Ovechkin had two goals. Marcus Johansson had one to finish the week tied with Ovechkin for the team lead in goals, and Mike Knuble scored on a penalty shot. Defenseman Karl Alzner had the other goal, the lone tally against Edmonton. Five goals on 67 shots (7.5 percent) wasn’t terrible, but it was quite a come down from scoring 15 goals on 85 shots (17.6 percent) in the previous week.

It was a Jekyll and Hyde sort of week. The Caps held the Oilers to a total of 38 shot attempts on Thursday, only 19 shots on goal (the Caps matched that total in the third period of the 2-1 loss). Things were quite different on Saturday. The Caps allowed almost as many shots (17) in the first period of the game against Vancouver as they did in the entire game against Edmonton. It was an effective job of jumping on the visitors by the Canucks. And Vancouver got pucks to the net. Of the 70 attempts the Canucks launched at the Caps’ net, 61.4 percent got through. And on a night when neither goaltender was on top of his game, that was 61.4 percent too much. It is worth noting (or forgetting) that the Karl Alzner/John Carlson defensive pair was on the ice for four of the seven goals Vancouver scored in their 7-4 win.

After the run he had since allowing five goals in his first performance in a Caps sweater – 5-0-0, 1.19, .965, and one shutout – it was bound to come to an end. And it did this week for Tomas Vokoun, who allowed two goals on 19 shots in Edmonton, then allowed three on 17 shots in 40 minutes in Vancouver for a week that ended 0-1-0, 3.82, .861. It says something about that run he had that Vokoun is still in the top-15 in goals against and eighth overall in save percentage. Michal Neuvirth saw his first action since opening night, and the three-week hiatus showed. He allowed four goals on the last 21 shots he faced in relief of Vokoun against Vancouver, three of them coming on three shots by the Canucks in a 4:07 span of the third period that was the difference in a 7-4 decision that was tied after 40 minutes. There have been better weeks.

The Caps saw a streak of five games with at least one power play goal ended in Edmonton, although the Oilers have displayed an effective penalty kill so far this season. They started a new streak when Alex Ovechkin netted an extra-man marker in the second period against Vancouver, but it was the only one they had for the week. The good and the bad is that the Caps did spread the shooting around – eight different Caps shared 14 power play shots on goal for the week. But on the other side, only one of those came from Alexander Semin, and neither John Carlson nor Roman Hamrlik seemed to be able to fill the shoes of the injured Mike Green in making the power play click from the blue line.

Special teams were not a strength this week, and the penalty kill was the worse of the two. Part of it was too many opportunities allowed. The eight power play chances the Caps allowed against Edmonton was the most they allowed in a game since they gave up nine in a 5-4 Gimmick loss to the Flyers on November 20th of last season. Those eight opportunities were as many as the Caps allowed in the three previous games combined. Skating 11:21 in penalty killing time was just too much to maintain any kind of rhythm in the rest of their game.

It didn’t get much better against Vancouver, as the Canucks registered power play goals on two of their first three chances to help themselves to a 3-1 lead after 20 minutes, putting the Caps in the position of catch-up. That the Caps were outscored 4-1 for the week on special teams, against teams ranked far below them on the power play (Vancouver finished the week tied for ninth, the Oilers 12th), made for a rough week on special teams.

Part of it was the fact that the Caps played only two games this past week, but the totals here were still not indicative of a team that skated with a lot of energy. The good part might be that 15 different skaters blocked at least one shot. The bad might be that of 23 recorded hits for the week, Troy Brouwer had nine of them – 14 for the other 17 skaters. Matt Hendricks, who had three for the week, was the only other Cap with more than two.

Going plus-24 the previous week was extraordinary. But this past week erred on the other side of what one might like to see. The Caps were not lazy with the puck, at least on the score sheet. They had 15 giveaways for the week. But the other side of that coin is that they had only ten takeaways. Only Nicklas Backstrom and Roman Hamrlik (two apiece) had more than one.

All the joking about teams going 82-0-0 aside, this was not a good week. They lost a game against a team they should have defeated in Edmonton, and they had a game on their plate after 40 minutes that they let get away with a four minute stretch of iffy play in the third period against Vancouver. There are going to be stretches like this in an 82-game season, but again, the trick is keeping them infrequent and short. There was not one single area that came up short this week. You name it – power play, penalty killing, goaltending, even scoring at even strength (outscored, 5-3 for the week) – it came up short.

This ends a difficult stretch in which the Caps faced three playoff teams from last season and an up-and-coming team. They broke even in doing so, which was not the worst result one could imagine. The Caps return home to face an Anaheim team that is only playing .500 hockey (5-5-1), but no doubt remembers the 7-6 loss the Caps gave them last season, when the Caps came from behind with two goals by Alexander Semin in the last ten minutes of the game. It would be nice to have Semin break out again against the Ducks and end this short slump.