"Excitement electrifies us, victory spikes the air, all sights are set on one glittering goal... the chance to play for and win the Stanley Cup."

Except for the bit about the Stanley Cup, that is a quote from the immortal “Voice of God,” John Facenda.  We pick that one because he never actually uttered the words, “on the frozen tundra of Lambeau Field…,” which is actually a quote from a parody of Facenda.

But one can almost hear his rich baritone voice uttering those words, or perhaps even those about a “frozen tundra,” because that is where the Washington Capitals will find themselves for the next couple of days, making perhaps their last stand in a desperate effort to salvage the last glimmer of hope of a playoff chase upon a wind-swept plain on the Canadian prairie.

Yeah, that is what is has come down to – two games on a cold March night.  Two cold March nights, actually, as the Caps play a rare back-to-back set of games in the same city, the city in this case being Winnipeg.  The Winnipeg Jets are the current, and perhaps unlikely, resident of the top spot in the Southeast Division.  How they got there is a story of persistence and a stick-to-it temperament.

That slow and steady pace masks the fact that over their last 16 games, the Jets are an impressive 11-4-1 .  Over those 16 games Winnipeg has outscored their opponents by a 45-40 margin. Part of the reason that aggregate score is so close despite the 11-4-1 record is the fact that of the four losses in regulation time, three of them were by three-goal margins.  In that respect the Jets have been like the little girl with the curl.  When they’ve been good, they’ve been very good (well, kinda good… five one-goal wins plus a Gimmick win), but when they were bad…

One thing that has been unambiguously not good over this 16-game run is the power play.  The Jets are a measly 4-for-37 (10.8 percent) over those games.  And it is not just the lack of scoring efficiency on the power play, it is the 2.3 chances per game.  Small wonder that the Jets have the fourth fewest power play opportunities overall so far this season.

The penalty kill, on the other hand, has been much better.  Winnipeg is 43-for-48 over their last 16 games (89.6 percent).  They were perfect in penalty kills in 14 of those 16 games.  They happened to have lost both of the games in which they allowed power play goals.

Here is how the two teams compare so far this season… 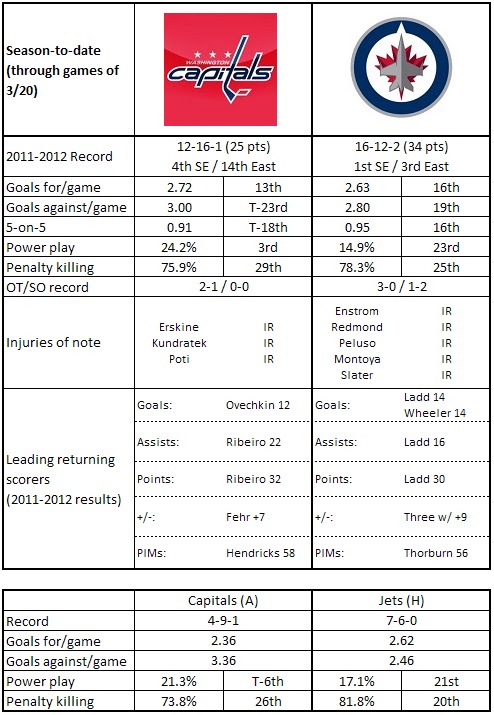 3.  That Winnipeg has only one shorthanded goal this season is not particularly unusual – 19 teams habve scored one or no goals while shorthanded.  But that the goal was scored by a defenseman?  Zach Redmond, who has played in only eight games this season for the Jets, is one of only seven defensemen in the league with a shorthanded goal.

5.  If…if, mind you… it comes down to the trick shot competition (the Caps have yet to participate in one), Ondrej Pavelec is ninth in the league in save percentage, having stopped 12 of 16 shootout stylings.  The thing is, though, the Jets have yet to entertain their hometown fans with a Gimmick performance.

3.  Only Philadelphia has scored more 5-on-4 goals than the Caps.  Given where Philly (12th) and Washington (14th) sit in the conference standings, it does not seem to matter very much, does it?

5.  Only four teams have fewer major penalties than the Caps – Detroit, Carolina, Edmonton, and Calgary.  Hey, wasn’t that supposed to be a “battle” in Alberta?

Right winger Blake Wheeler is in something of an odd pattern lately.  He scores goals every other game. Starting with a goal in a 3-2 overtime win over Florida on March 8th, he alternated not scoring goals with scoring two goals over the next six games to go 7-1-8, plus-4.  It is part of a longer stretch of goal scoring in which he has multiple-goal games four times in his last 15 contests.  Wheeler has had modest success over his career against the Caps – 3-7-10, minus-3, in ten career games – but he did have the game-winner in the Jets’ 4-2 win over the Caps in Washington’s home opener back on January 22nd.  Oh, and the pattern says he will not score tonight.

Mike Ribeiro might be forgiven if he was distracted by all the trade talk.  With the Caps all but out of serious contention for the playoffs, and with Ribeiro’s contract expiring at the end of this season, he is probably the most attractive trading target on the Caps’ roster, both for playoff hopefuls and for the Caps.  But the player still has to perform in the here and now, and Ribeiro’s production has not seemed to suffer for the noise.  But for a three-game hiccup ealier this month, Ribeiro has not gone consecutive games without a point this season.  He is 1-3-4 over his last four games following that three-game dry spell, and even with it he is 4-6-10 over his last ten games.  He is 6-11-17, plus-11 in 20 career games against the Jets.

1.  No “Jet” lag.  The Caps fall behind early too much, allowing the game’s first goal 16 times in 29 games and trailing at the first intermission 12 times in 29 games.  And while they have a decent ranking when trailing, these things are relative.  Few teams actually succeed very much when falling behind in this league.  They need a fast start in these games.

2.  Hold Your Liquor.  On February 28th, the Winnipeg Free Press said this about Evander Kane…

“Kane is emerging as one of the most dangerous young players in the game, with a cocktail of speed, power and finish. Promise is no longer the word most used when discussing him. Consistent threat, force and dominant have become the new labels.”

He is the engine that drives the Jets these days.  With eight goals on this 11-4-1 run of late and nine in 17 career games against Washington, attention must be paid.  And with 76 shots on goal over the last 16 games (4.75/game), one will not have to look far to find him.

3.  Knock ‘em out.  Winnipeg has done very well in close games this season – 9-4-2 in one-goal decisions and 6-2 in two-goal games.  On the other hand, if they go sour, they are worse than vinegar: 1-6 in games decided by three or more goals.  And part of that is neutralizing them early.  The Jets have the only perfect record in games they lead after one period: 7-0-0.

In the end, if you still adhere to the notion that the Caps have a chance to make the playoffs (note: Powerball is up to $320 million…), they have to win both of these games in regulation.  No other result can be entertained.  If they split the points to remain nine behind the Jets with 17 games to play, forget it.  Winning the Southeast is not a path to the playoffs; they would have to do it through the conference route.  And they are seven points out of eighth place now.  The Caps have not been making up any ground on that score in recent weeks, either.