The Peerless Prognosticator is ON THE AIR!!! -- Caps vs. Devils, October 18th 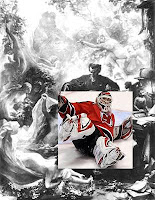 We are live from Peerless Central, where preparations are underway for the Caps first contest against the New Jersey Devils in the 2008-2009 season. The Devils are in their fourth and last game of a road trip that has taken them away from their new palace in Newark. They are 2-1 so far on this trip, but while they’ve been away, some interesting documents of archeological importance were discovered in the materials excavated from the site that are now in a New Jersey landfill (along with Jimmy Hoffa, Judge Crater, and John McCain’s chances of winning the election). The Peerless has received exclusive access to a particularly important – and revealing – piece of the find…the original Devil’s agreement:

I, Mephistopheles (a.k.a., The Devil, Beelzebub, Satan (not Miroslav), Gary Bettman), the party of the first part, do agree to provide the party of the second part with riches, fame, health, records never to be broken, culinary talent, a gift for story telling, and a little fun on the side.

In exchange, the party of the second part promises to relinquish, at a time of my choosing…

Party of the first part: Mephistopheles

OK, maybe it only seems that way, but Brodeur is on the verge of setting new records for career wins (at 541, he is ten short of Patrick Roy’s record of 551) and shutouts (his 98 is five short of Terry Sawchuk’s record of 103). As far as health goes, the last time Brodeur played fewer than 3,800 minutes in a season, it took a shortened season to do it (1994-1995). He has ten consecutive seasons, and counting, of having played at least 4,000 minutes and seems to be on a pace to eclipse that mark again. He has 12 consecutive seasons of at least 30 wins (an NHL record) and has seven seasons of at least 40 wins (another NHL record), including an NHL record 48 wins in 2006-2007. He holds records in combined career shutouts (playoff and regular season), overtime wins, minutes played in a season, most shutouts in one Stanley Cup playoff, most shutouts in a Stanley Cup final, and is the only NHL goalie to have been credited with scoring a game-winning goal.

It’s a safe bet he’s going to the Hall of Fame.

To beat the Devils, one has to beat Brodeur.

Frankly, Brodeur and the fabled Devils’ “system” it’s about all the Devils have going for them at the moment. As a group, they have scored a total of six goals in four games, no more than two in any single contest. And for all of that, the Devils are still 3-1-0. Why? They’ve given up only six goals, a total of two in their three wins. They have allowed only two even strength goals so far this season (they are, as you might expect, the best five-on-five team in the league at this early juncture).

Only eleven skaters for the Devils have registered at least one point through four games, and only two – Zach Parise and Patrik Elias – have more than one goal. If you do the math, that means that 15 Devil skaters have failed to score a goal, eight have failed to register a point. Among the latter, there is Bobby Holik, who was brought back to...well, we’re not exactly sure what, considering he’s being paid $2.5 million this year to be a ten-minute a night (ok, 10:25 a night) center.

Our old friend, Dainius Zubrus is once more displaying his sense of splendid mediocrity, notching an assist in four games, plus-1, and five shots (total, not per game) in 13:36 of work per game.

One source of concern for the Devils might be Brian Gionta. After putting up 48 goals in the 2005-2006 season, he slumped to 25 the following year and 22 last year. He is without a goal (with two assists) in four games to date.

One of the things (one of the many things) the Devils aren’t getting in scoring is production from the defense. Through four games, seven defensemen have a total of two assists (Colin White and Paul Martin). The seven have a total of 22 shots (by way of comparison, Mike Green has 21, and the other five – not including Sergei Fedorov – have 19).

Backstrom has been off to his own slow start – no goals, an assist, plus-one in almost 19 minutes a night on the top line. But, he is 1-4-5, plus-3, with a power play goal in his four games against the Devils. He had at least one point in each of the games the clubs played last year.

In the end, the Caps remind Brodeur of his contract and its “pay in full” clause. The Devil gets his due, tonight, not the Devils…