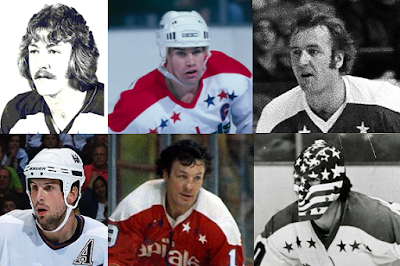 We are now down to the penultimate look back at the All Alphabet Team that we published originally in 2014.  The All-Team W that we published back then was among the more experienced teams in games played with the Caps and looked like this:

All-Team W is among the more experienced of squads in the All-Alphabet collection, at least in the regular season.  The five skaters combined for 1,353 games with the Caps, all of them dressing for at least 100 games with the club.  Brendan Witt leads the group with 626 games.  But it is not a group with much postseason experience.  Witt is the only one of the skaters to have dressed in the postseason, appearing in 31 games over his career with the Caps.

This is also a squad that has specific lanes in which the skaters skate.  Forwards have good offensive numbers, the defense is more “defensive” in their orientation.  Each of Tony White, Ryan Walter, and Tommy Williams averaged 19 or more goals per-82 games (19, 30, and 23, respectively), and Walter and Williams averaged more than 60 points per-82 games (74 and 61, respectively.

On the back end, Brendan Witt and Bryan Watson were of two completely different eras, but both were more oriented to the defensive side of the puck, Witt going 3-8-11 per-82 games in his Caps career, Watson going 2-14-16 in 155 games with the club. Each provided a physical edge that complemented their defensive games.  Witt is one of two Capitals defensemen to amass more than 1,000 penalty minutes in his career with the club (1,035, trailing only Scott Stevens’ 1,628), and Watson averaged almost two penalty minutes per game in his career with the Caps (294 minutes in 155 games).

In 82 regular season games with the Caps over the period, Ward went 19-15-34, minus-4.  That he is perhaps most remembered for the series-clinching goal in overtime of Game 7 of the 2012 playoffs against the defending Stanley Cup champion Boston Bruins should not enter into the consideration, given the period over which replacements are evaluated, but it is hard to dismiss it.

Justin Williams went 46-54-100, plus-29, in 162 regular season games with the Caps since 2014 and was among the team leaders on the ice during his stay with the club.  What he was unable to do, despite going 6-10-16 in 25 postseason games in Washington, was duplicate his late-series heroics that gave rise to a nickname of “Mr. Game 7.”

Tom Wilson remains a work in progress, going 75-103-178, plus-29, in 440 games over the period to date.  He has added 11 goals and 25 points in 25 postseason games and has his name engraved on the Stanley Cup.  He has become a foundation player at both ends of the ice, manning a top line spot in even strength situations and among the primary penalty killers among the forwards.  It is Wilson’s production, potential, and his ability to flourish in different situations that make him the pick to replace Tommy Williams at right wing on All-Team W.

In goal, Bernie Wolfe toiled for some ghastly teams in his four seasons in Washington, and his record reflects it (20-61-21, 4.18, .977, with one shutout).  Nevertheless, he will remain as the goalie on this squad, what with none of the five goalies dressed for the Caps since 2014 qualifying as a replacement.

All-Team W is a team that can provide some offensive fireworks in one end and some orneriness in the other.  What is left to wonder is whether the higher aggregate talent might have made Bernie Wolfe’s numbers better in goal.