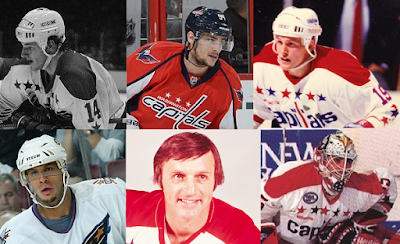 Continuing with our look back at the “All Alphabet Teams” for the Washington Capitals, we are up to the letter “D.”

If “All-C Team” was among the most accomplished, “All-D Team” is more uneven.  One might see this as an opportunity to re-think the original 2014 version of the roster.  At left wing, the issue is not that Gaetan Duchesne, one of the best defensive forwards in Caps history, is irreplaceable, it is that there are so few candidates to replace him from the 2014-present period.  That is a population of none.  Duchesne’s place is safe.

At center, Nicolas Deschamps and Doug Doull were the only players whose last name started with the letter “D” who dressed for the Caps over the 1974-2014 period.  It was not a large pool of players from which to pick.  The pool of players since 2014 at the position is even smaller – Nic Dowd.  But that is sufficient to advocate a change at the center spot.  Deschamps played only three games with the Caps (one more than Doull), recording no points and posting a minus-1 rating.  Dowd, on the other hand, has logged 120 games with the Caps, going 120 games with Washington, going 15-22-37, plus-21, and recording an impressive 50.7 faceoff winning percentage and 214 credited hits, while averaging 2:03 in penalty killing ice time per game in those 120 games.

On the right side John Druce, who had one of the most surprising and memorable postseasons in Caps history in 1990 (his 14 goals in the 1990 postseason stood as a team record until Alex Ovechkin broke it with 15 goals in 2018),  was picked for the “All-D Team” in the original 2014 posting.  He remains there for the same reason Gaetan Duchesne remains on the left side.  Since 2014 the Caps have had no right wingers whose last name starts with the letter “D.”

On defense, “All-D Team” also suffers from a lack of choices.  Jason Doig was the only defenseman in the 1974-2014 period whose last name started with the letter “D.”  That is why you find that asterisk next to Doug Mohns’ name, having to find a defenseman whose first name started with “D.”  Although Mohns was the very first captain in franchise history in 1974-1975 (his last NHL season), he might have to take a seat.  Christian Djoos and Brenden Dillon have played for the Caps since the 2014 team was published, and it is Djoos who merits consideration as a replacement for Mohns.  In 110 games with the Caps, Djoos went 4-20-24, plus-23; and he was 0-1-1, plus-2, in 25 playoff games, including 22 games in the Caps’ 2018 Stanley Cup run.

In goal, Byron Dafoe gets to keep his spot, despite his having played only three games as a Capital (0-2-0, with one no decision), the Caps having had no goalies dress since 2014 whose last name starts with the letter “D.”

This new “All-D Team,” with two replacements – Dowd for Deschamps and Djoos for Mohns – is a more experienced, more productive group, but it would not be remembered as one of the best of the All-Alphabet Teams.
Posted by The Peerless at 8:42 PM No comments: