The Peerless Prognosticator is ON THE AIR!!! -- Game 5: Capitals at Flames, October 20

The Washington Capitals take their show on the road for their first trip out of Washington this season.  After posting a 3-1-0 record in their four-game home stand to open the 2015-2016 season, they head off to western Canada to take on the Calgary Flames, Vancouver Canucks, and Edmonton Oilers.

The Flames are first up on the trip, and the Caps will be visiting a city in which they have not played very much in recent years.  Since the 2004-2005 lockout, the Caps have played just five games in Calgary, posting a record of 3-2-0, a 3-1 win at Scotiabank Saddledome in October 2014 being the Caps’ most recent experience in Stampede City.

Calgary is said to be named by a colonel in the North-West Mounted Police for his home in Scotland.  There some question over the origin of the name itself, whether is comes from the Old Gaelic for “beach of the meadow,” or from the Norse words for “cold” and “garden.”  We’ll put our money on the latter.

“Cold” might be an apt description of Flames hockey at the Saddledome so far this season.  Calgary is 0-3-0 in three home games so far this season (1-4-0 overall), dropping decisions to the Vancouver Canucks, St. Louis Blues, and Edmonton Oilers.  They have been outscored, 14-6, in the three games; their power play going 2-for-10 and their penalty kill going 6-for-8.

Half of the six goals scored by the Flames at home have come off the stick of David Jones, a nine-year veteran drafted by Colorado in 2003.  Jones is testimony to the virtues of perseverance.  He is the last skater taken in the 2003 draft (288th overall) who has ever appeared in an NHL game, and he ranks a respectable 51st in total games played in that draft class (392), more than six of the 30 players taken in the first round that year.  And it is not as if Jones has been a mere grinder or marginal player over his career.  He does have two-20 goal seasons to his credit (both with Colorado, in 2010-2011 and 2011-2012) and is coming off a 14-goal, 30-point season with Calgary last season.  In four career games against the Caps, Jones is 1-1-2, plus-1.

We are now three-plus seasons removed from Dennis Wideman’s stay in Washington.  The defenseman, who recorded 12 goals and 53 points in 96 regular season games with the Caps, went 15-41-56 last season for the Flames, tied for sixth among defensemen in goals and fourth overall in points.  So far this season, Wideman does not have a goal, but he is spreading the good fortune around.  He is tied for third in the league among defensemen with five assists; he has 11 assists in his last eight regular season games dating back to last season.  He is also ninth among defensemen in average ice time, logging 25:05 a night.  Wideman is 5-8-13, even, in 21 career games against the Capitals.

Goaltending has not been anything to get excited about in Calgary so far this season.  Jonas Hiller and Karri Ramo have combined for an aggregate goaltending line of 3.60 goals against average and .887 save percentage.  Only Hiller has allowed fewer than three goals in a game so far, and he has done that once in three appearances (a 3-2 overtime win over Vancouver for the Flames’ only win this season).  Hiller and Ramo have alternated the last three games, and if that pattern holds, Ramo would get the call against Washington.  He is 1-4-2, 3.11, .905 in eight career appearances against the Caps.  If Hiller gets the nod, he brings a 3-1-1, 3.23, .894 record against Washington to the contest. 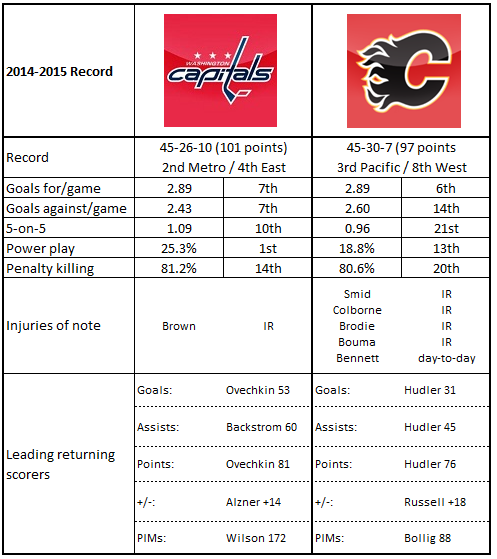 1.  Plus-minus has its limitations as a statistic, but looking at the Calgary roster, only one player is in positive territory: Sam Bennett (plus-1), and he’s hurt.

2.  Some folks think that paying attention to the little things leads to doing the big things well.  Calgary is 28th in the league in faceoff winning percentage (46.2 percent).  They are 1-4-0.  It might be coincidence.  Then again…

3.  The Flames have been outscored, 7-3, in the third period of games so far this season.  Given the Caps success in scoring third period goals so far, this bears watching.

4.  Outside of Dennis Wideman, only one other Flames defenseman has a point.  Dougie Hamilton has it, and it happens to be the Calgary defense’s only goal this season.

1.   Brooks Laich was our “Player to Ponder” in the Carolina game,  and he merits some more pondering.  What to make of a player who leads the club in Corsi-for percent at 5-on-5 (69.6) and has not been on ice for a goal scored for the Caps.  Sure, part of it is teammates (Chandler Stephenson and Sean Collins, with whom Laich has spent some time, haven’t been on ice for a goal for, either), but it is a trend one would like to see reversed.

2.  The Capitals are one of nine teams (through Sunday’s games) without a fighting major penalty.  Only four teams have been called for fewer minor penalties.  The best penalty kill is the one you don’t have to perform.

3.  The Caps are 28th in the league in hits, 17th in blocked shots, two statistics in the “negative space” – indicators that you don’t have possession of the puck.  Conversely, Washington is ninth in Corsi-for percent at 5-on-5 (52.1), and only four teams have higher offensive zone start shares in those situations than the Caps (57.0; numbers from war-on-ice.com).

4.  Matt Niskanen already has half of his 2014-2015 total of even strength goals and power play goals through four games.  It might not be saying much, since he has one of each and the moment and had two of each last season.

5.  Seven different Capital forwards are averaging at least one minute per game on the penalty kill.  Even Tom Wilson, who had a grand total of 46 seconds of shorthanded ice time last season, is over a minute (1:11/game).

Douglas Jonathan Hamilton, known to hockey fans as “Dougie,” has had quite an adventure as a hockey player for one who just turned 22 years of age last summer.  He was drafted ninth overall by the Boston Bruins in the 2011 entry draft.  After spending one more year in Canadian junior, he went right to the big club, playing in 42 games in the abbreviated 2012-2013 season.  He finished tied for third in points among rookie defensemen (16).  In the next two years he progressed handsomely, finishing 7-18-25 in 64 games in 2013-2014, then going 10-32-42 in 72 games last season for the Bruins.

The progress came at a price, not to the player, but to the club.  Facing status as a restricted free agent and perhaps not being appreciative of the approach of head coach Claude Julien, Hamilton was traded to the Flames over the summer for a first round draft pick and two second round picks.  On cannot yet say that Hamilton is flourishing in his new surroundings.  He has one point, is a minus-3, and has taken eight minutes in penalties (second only to Derek Engelland among Calgary defensemen), despite logging more than 23 minutes a game.  The combination of being a young guy, leaving the team that drafted him on iffy terms, and getting settled in his new environment might contribute to the slow start, but much is expected of him, too.  Hamilton is 1-2-3, minus-3, in seven career games against Washington.

Andre Burakovsky is currently the man – perhaps the only man on the Caps roster – without a permanent address in terms of which line he is playing on.  Burakovsky has logged 50:24 in 5-on-5 ice time, and it breaks down rather neatly among three pairs of forwards.  Of that total, he has 25:43 with Maruch Johansson and 22:25 with Justin Williams.  He has 11:41 with Evgeny Kuznetsov and 11:24 with T.J. Oshie.  And, he has 9:03 with Brooks Laich and 7:03 with Chandler Stephenson.

That is pretty much the profile of a player who has had first, second, and fourth line responsibilities to date.  What is more, going forward he might be a third line center.  It is a lot for a 20-year old, second year player to take in, but he does have an assist in four games, and he is tied for second among Caps forwards in blocked shots.  What has been consistent, and not really in a good way, is his work in the faceoff circle.  He is third in total draws taken for the Capitals, but his 38.1 percent winning rate needs to improve.  He does not have a point in two career games against the Flames.

Having lost their first three home games of the season, one would have to think Calgary will come out hard and fast against the Caps on Tuesday night.  It will be a good test for the Caps in how to manage the other team’s enthusiasm by sticking to their game plan.  That argues for keeping things simple, just like one draws it up for a road game.  The Caps have too many weapons for what has been shaky defense and goaltending for Calgary so far this season.  If they can apply the same slow, steady pressure on the Flames that they applied to Carolina on Saturday, the road trip should get off to a good start.