Turning for Home -- Does "After Trading Day" Matter?

Well, Trading Day has come and gone, and as the teams with their new presents find out just whether or not they’ll have months of enjoyment with them, we’re left to ponder…”does it matter?”

We’re not so much interested in whether specific trades matter for our purposes this morning (we’re not yet in the mood for that kind of detailed research at the moment), but it doesn’t take much to figure out whether Stanley Cup finalists achieve that level of result on the basis of having done well or poorly after the trading deadline.

We took a look at Stanley Cup finalists going back to 1981 – 27 seasons and 54 teams worth of information – to answer the question, “how well did these teams do leading to the finals?” In other words, can a team that finishes poorly in the regular season stand a chance of making the final? Or, does a team have to end the regular season with a strong finishing kick to have a shot at Stanley Cup finals glory? The trading deadline provides a convenient starting point, since it is after this point that teams have the rosters they will carry forward into the playoff run.

Here are the results (records are for games after Trading Day; those played on the day of the trading deadline are not included) … 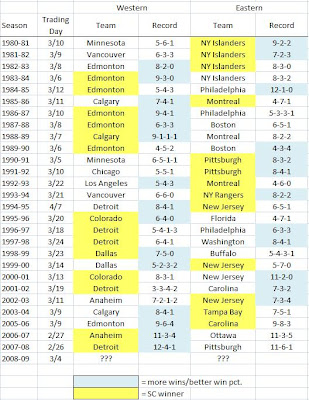 Here are some of the things that struck us about this history of records after the trading deadline:

- You don’t necessarily need to have the better record than your finals opponent to win – 14 times in 27 the team with the better record won. But you can’t have been limping into the playoffs, either. Only once has a team that finished in the post-trading deadline period with a record as many as three games under .500 won the Cup (Montreal – 4-7-1 – in 1986).

- The 27-season window is really two windows. Prior to the lockout, teams generally had a dozen or so games to get their acts together for the playoffs. Since the lockout, teams have had 20 or so games to sort things out. It shows. Although the events are small in number, all six teams reaching the finals have had a better-than-.500 record, and four of them (the last four finalists) have won an outright majority of the games they’ve played from the deadline to the end of the season).

- As for those last four finalists, they’ve been dominating down the stretch, defined as winning more than twice as many games as they have losses in regulation time. Three of the four have achieved that results, and the other – the Penguins last year – still managed to win 11 of 17 games. That’s a small set, but comparing it to the pre-lockout period, it was done 16 times among 48 finalists.

Let’s get to the happy ending. More times than not – many more times, in fact – the road to the finals can’t be littered with potholes. If you’re not doing well going into the playoffs, chances are you’re not going to last long.

Posted by The Peerless at 1:03 PM No comments: