Well, we’re half way through the forwards, which brings us to… 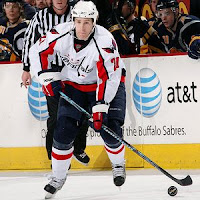 Fearless’ Take: Chris Clark played in one game after November 28th last season. One might have asked who, if anyone, could step into the “unexpected” scorer role that Clark jumped into during the 2005-2006 season. Well, Brooks Laich went 17-14-31 after November 28th, a span of 58 games. That works out to a 24-20-44. He was 12-8-20 in his last 22 games. And, just as Clark was “Mr. Opportunity” in his first two years with the Caps, Laich slid into that role comfortably last year, with 10 special teams goals (eight power play, two shorthanded) and four game-winners. He finished third in goals, third in power play goals, led the club in shorthanded goals, was tied for second in game-winners, had the best shooting percentage on the team, led all forwards in blocked shots, and did all of this in barely 14 minutes of ice time per night (ninth among Cap forwards). He might have been the most efficient player on the club whose name didn’t start with “O.”

Cheerless’ Take: Chris Simon scored 29 goals in 1999-2000 and never had more than 14 in a season again. You could argue it was due, in part, to shoulder injuries (or becoming player often times exhibiting galactically poor judgment), or it might have been just one flukish year. Now, Brooks Laich is probably a fundamentally more sound player than Simon ever hoped of being, but one year doesn’t turn Randy Robitaille into Luc Robitaille, either. Then there is the matter of where he plays. He might play with Alexander Semin and Sergei Fedorov, playing a similar role to that which Chris Clark might play with Michael Nylander and Tomas Fleischmann, for example. Is he going to get chances, or is he going to play “fetch the puck?”

The Peerless’ Take: Cheerless, who cares if Laich plays “fetch the puck” (or if Clark does, for that matter)? If he plays that role well, Semin and Fedorov – should that be his line assignment – are certainly capable of knowing what to do with the puck when they get it, and the team benefits in any case. There is also the matter of special teams. Laich had eight power play goals while averaging 1:18 in power play time a game. He might not get a lot of time in that role, but he’s showed himself to have a knack (ok, for one season, anyway) for making the most of that opportunity What Laich got was an opportunity. The production he enjoyed last year was, frankly, that envisioned for Matt Pettinger. But Pettinger – who scored 36 goals combined in the two seasons preceding last year – simply couldn’t find the spark to start the year and got shoved to the back of the dog house when he didn’t improve under Bruce Boudreau. Laich jumped into the void and made the most of it. The fact is, Laich could be one of those guys who scored prolifically in junior (63 goals in 107 games in his last two seasons in Canadian junior) who struggled a bit with scoring at the pro level until: a) he got consistent playing time, and b) the light finally went on in terms of how to take advantage of what skills he has to put himself in a position to score (one hopes that a similar moment comes for someone like Boyd Gordon this year).

Posted by The Peerless at 6:35 PM No comments:

The Hershey Savings and Loan

Worried about the stock market these days? Concerned you can't get a loan? Well, there is one investment institution that is looking "bullish." Or is that "bearish?"
We start with Tarik El-Bashir's article in this morning's Washington Post, chronicling the fate of Karl Alzner, Chris Bourque, and Quintin Laing, all of whom (assuming Laing clears waivers) will be headed up Route 15 to Hershey to start the season tomorrow night in Wilkes-Barre to face the Baby (infantile, childish) Penguins.
But here is what caught our eye in the report...

Because of a quirk in the collective bargaining agreement, there is no 7.5 percent cushion for bonuses this season, so all of Alzner's $1.675 million in compensation (his base salary plus performance incentives) would have counted against the Capitals' salary cap figure. By sending Alzner, 20, to the minors, the Capitals will save one day of his cap hit for every 24 hours he is in Hershey, thus allowing the team to build space under the salary cap should the team want to recall him or make an acquisition at the trade deadline.

So, the Caps save about $9,000 a day in salary cap hit by sending Alzner to Hershey. And, Chris Bourque (not to mention a few others) will be spending time at Hershey, honing his game, available for a loan on E-Z terms, so to speak, should the need arise.
At a time when our 401(k)'s are in the dumper, when we're finding loans at decent terms harder and harder to find, it's nice to know that there is still one place nearby that has the potential to pay nice dividends.
Posted by The Peerless at 6:48 AM 4 comments:

Today, we’ll take a look at… 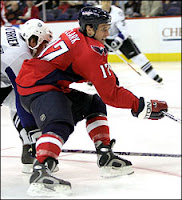 Fearless’ Take: It’s almost like getting a free agent who is free. In the 61-game rush last year, when the Caps went 37-17-7 to close the season, Clark played a total of four (and only one after November), and had less than 11 minutes of ice time in the last two. What did the Caps, and coach Bruce Boudreau, miss? A guy who had an 82-game average of 27-23-50, even, and 104 hits in two full years with the club. And Clark has shown himself to be a consummate opportunistic player, as well. Much can be made about the fact that he’s achieved these two-year numbers playing on the right side of the top line with Alex Ovechkin (that would be taking advantage of an opportunity), but along with that, more than a third of the goals Clark scored were on special teams – ten on the power play and seven shorthanded goals. Think Coach Boudreau can find a role for that sort of player?

Cheerless’ Take: He won’t be playing on Ovechkin’s line this year, at least not to start the year. If there is one line that seems pretty well cemented, it is the Ovechkin-Backstrom-Kozlov line. He might end up having to play the role of rooting out pucks from the corners and the boards for linemates such as Michael Nylander or Tomas Fleischmann, neither of whom are suited to that role. Neither are the finisher Ovechkin is, either (Feerless…”tell me, cuz, who is?”). That might be an intriguing line in some respects, but will it be productive? And, Clark is coming off a season where he lost 57 of the last 61 games, largely to a severe groin injury. How is he going to fare, skating 41 games in the gravel pit on 7th Street?

The Peerless’ Take: You ever see those pics from long ago? The dirt-smeared face of the grunt in the trenches in war? Hockey isn’t war, but Clark is that guy in the trenches who does whatever needs to be done to help his team. He could play on any line and contribute. He plays both ends of the ice, he checks, he hits, he’ll stand up for a teammate when they’ve had their liberties abused, and he’s shown a knack for scoring the opportunistic goal. There are some people you look at in life and without knowing much about them, you still think, “leader.” Clark has that sort of presence, and it is why he is such a good fit as captain of this team. He isn’t likely to duplicate his goal-scoring total of two years ago (30), but he could have opportunities around the net playing with Nylander and Fleischmann, both of whom can play a puck possession game. Lost in last year’s injury-riddled mess is the fact that Clark was 5-4-9, even, in 18 games. That works out to a respectable 23-18-41 over 82-games, and he earned most of that total before Bruce Boudreau arrived on the scene. But whatever his output on the score sheet, he can – and will – contribute in a lot of other ways.

Posted by The Peerless at 4:07 AM No comments: