The Peerless Prognosticator is ON THE AIR!!! -- Game 57: Capitals at Blue Jackets, February 12th

The Washington Capitals take to the road on Tuesday night to wrap up their back-to-back set of games, facing the Columbus Blue Jackets in a Metropolitan Matchup between two teams fighting for postseason seeding.

The Caps go into this game fresh off a 6-4 win over the Los Angeles Kings on Monday night, while the Blue Jackets have been idle since beating the Vegas Golden Knights, 4-3, on Saturday.  The Caps will be seeking their first road win since they beat the Boston Bruins, 4-2, back on January 10th.  Of course, the Caps have spent a lot of time since at home, having played only three road games since that win.  The bad news there is that the Caps allowed 21 goals in the three losses.

Columbus goes into this game on a three-game winning streak, part of a streaky pattern for the Blue Jackets who, since January 10th, have had a four-game winning streak and a five-game losing streak before this latest winning streak.  And speaking of streaky, that has been Cam Atkinson of late for Columbus.  In 15 games since New Year’s Eve, Atkinson is 8-7-15 and has five multi-point games.  That recent push has propelled him past the 30 goal mark (31) and within four of the career best he set in 2016-2017.  And when Atkinson scores, Columbus wins.  They are 18-4-1 in games in which he scored a goal this season, 9-2-1 on home ice.  This will be a milestone game for Atkinson, who will become the sixth player in Blue Jackets’ history to appear in 500 games for the club.  In 24 career games against Washington, he is 10-7-17, plus-2.

Pierre-Luc Dubois validated his third-overall selection by the Blue Jackets in the 2016 draft (after Auston Matthews and Patrik Laine) with a fine rookie season last year, dressing for every game and finishing among the top-ten in the rookie class in goals (20/tied for seventh), assists (28/eighth), points (48/eighth), power play goals (six/tied for fourth), power play points (15/seventh), game-winning goals (four/tied for fifth), hits (127/sixth), and takeaways (38/tenth).  He has been on an extended hot streak of his own, going his last 21 games without consecutive games without a point and putting together an 8-14-22, plus-7, scoring line.  He is of particular interest in this game owing to his being the Blue Jjacket who started the goal celebration mocking Capital Evgeny Kuznetsov after the Blue Jackets beat the Caps, 2-1, in overtime on January 12th.  Dubois is 1-3-4, plus-1, in seven career games against the Caps.

One would not expect a defenseman to lead his team in power play goals, but Seth Jones does just that for Columbus.  His seven man-advantage goals is tied with Artemi Panarin for the team lead.  His 24 power play points leads all Columbus skaters.  Jones has not been lighting the lamp on his own of late, having gone 13 straight games without a goal.  But over that same span he does have nine assists.  Despite having played in only 47 of Columbus’ 54 games this season, Jones has logged at least 25 minutes 32 times, tied for fourth-most 25-minute games in the league this season (with Washington’s John Carlson).  Jones has already established himself as being among the most productive defensemen in Blue Jackets history, despite this being only his fourth season with the club.  He is third in team history among defensemen in goals (37), third in assists (116), third in points (153), sixth in power play goals (nine), and the all-time team leader in game-winning goals (10).  In 15 career games against Washington, Jones is 3-8-11, minus-1. 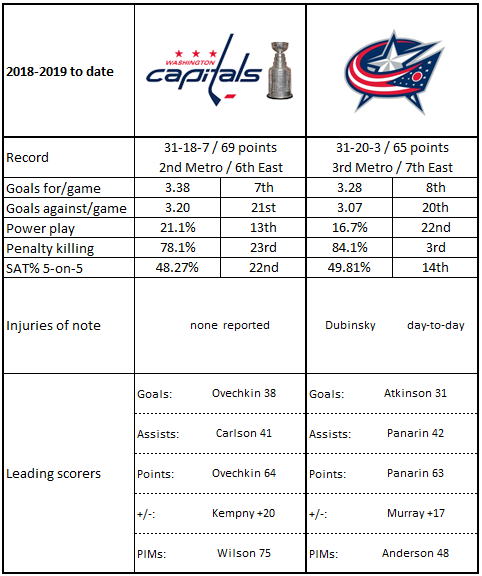 3.  This year’s version of the Blue Jackets is on pace to be the least penalized in the history of the franchise.  They have averaged only 6:39 in penalty minutes per game, besting their 6:53 per game last season.

5.  Three players in Capitals history have recorded at least one 100-point season.  Almost all Caps fans these days know that Ovechkin is one of them (he has done it four times).  A lot of Caps fans could probably name Dennis Maruk, who set the team record with 136 points in 1981-1982. The third one might be a bit harder.  Mike Gartner was known as a big goal scorer, but not necessarily as a high volume point producer, at least to three digits.  He did it, though, going 50-52-102 in 1984-1985.

Will he stay, or will he go?  Artemi Panarin is almost certain to go at some point, but the question looms over the Columbus Blue Jackets as the trading deadline approaches.  Last Friday, Panarin, who is set to become an unrestricted free agent this summer, issued a statement that he was enlisting the services of a new agent, one also employed by teammate Sergei Bobrovsky, who is also on the verge of unrestricted free agency.  In a related media session, Panarin expressed his intention to test free agency, noting, "It's one life, one chance for free agency, and I want to test free agency.”  What complicates the situation for the front office is that Panarin is the team’s second-leading goal scorer (21, tied with Pierre-Luc Dubois) and its leading point-getter (63).  He is in his second season with the Blue Jackets, and in both of them he has averaged more than a point per game.   If he finishes the season (or is traded before season’s end) averaging more than a point per game, he will become the only player in Blue Jacket’s history to do it twice (Rick Nash did it once and in another season averaged 1.00 points per game).  For a club fighting for a playoff spot, the question becomes the classic one of whether they trade him and get something of value, or keep him for a playoff run and almost certainly lose him for nothing this summer.  Panarin is making the choice particularly difficult with his play, going 12-17-29, plus-12, over his last 20 games.  He is 4-4-8, plus-3, in 11 career games against the Caps.

The Capitals have their own, if quite different, personnel matter to consider as the trading deadline approaches.  Andre Burakovsky has been disappointing on the ice this season.  A player of considerable talent, his production simply has not come close to matching that talent level this season.  His 7-8-15 scoring line in 49 games has been another in a series of seasons of declining production since he went 17-21-38 in his sophomore season in 2015-2016.  Part of the problem has been injuries.  In each of the last two seasons he missed at least 15 games at a stretch to injury, and he missed another ten playoff games last spring to an upper-body injury.  This season it has been inconsistency.  When he recorded an assist against the Los Angeles Kings on Monday night, it was the first time this season he recorded points in three consecutive games.  Whether that is an indicator of his coming out of a season-long funk (he is 2-5-7 in his last nine games) or merely a tease is something the Capitals front office will have to consider as the trading deadline approaches.  Burakovsky is 4-3-7, plus-4, in 15 career games against Columbus.

These are two teams that seem to have slowly developed a dislike for one another.  Be it the generally ornery nature of John Tortorella behind the Columbus bench, or the Caps climbing out of an 0-2 hole to win the opening round of last spring’s postseason, or the mock goal celebration by the Blue Jackets the last time these teams met, they seem to get on each other’s nerves.  It has not yet taken on the flavor of the “Patrick Division” rivalries against such teams as Pittsburgh, Philadelphia, or the New York Rangers, rivalries that took decades to become what they are.  But these teams are fighting for what might be the same playoff space, opening round home-ice advantage.  That should make both teams motivated and give this contest something of a playoff air to it.  The fault line might be the Caps playing in the back half of a back-to-back set of games versus the personnel distractions that Columbus has to deal with these days.