The Peerless Prognosticator is ON THE AIR!!! -- Game 12: Capitals at Oilers, October 24th

Washington Capitals are two games into their season-long five-game road trip and have put two wins on the ledger.  They will try to make it three in a row, and five consecutive wins overall, when they head to Rogers Place in Edmonton to face the Oilers on Thursday night.  Washington will enter the contest as the leader in the Metropolitan Division and the conference leader in road wins (five).  Meanwhile, the Oilers, who were 7-1-0 in their first eight games, have lost two in a row on the road, both via shutout, a 1-0 Gimmick loss to the Winnipeg Jets on Sunday and a 3-0 loss to the Minnesota Wild on Tuesday.

The ten games played by the Oilers to date cleave into two neat pieces.  The first was a five-game segment in which they went undefeated and outscored opponents, 21-13.  However, in the second five games they are 2-2-1 and have mustered only nine goals, six of them coming in a single game, a 6-3 win over the Philadelphia Flyers on October 16th.

The recent problem for the Oilers has not been top-line scoring.  Over those last five games Edmonton has three two-goal scorers.  One of them is expected, one isn’t.  Leon Draisaitl might be expected to be on this list.  He is coming off a career season in which he doubled his 2017-2018 25-goal total into his first 50-goal season last year.  It was quite an achievement.  One will remember the Oilers as once being the most prolific of offenses with the likes of Wayne Gretzky, Mark Messier, and Jari Kurri, but Draisaitl’s 50-goal season last year made him only the fifth player in Oiler history to record at least one 50-goal season (Gretzky (8), Kurri (4), Glenn Anderson (2), and Messier being the others) and the first to do it since 1987.

He did it last year with uncommon efficiency.  Of 370 skaters to record at least 100 shots last season, Draisaitl had the best shooting percentage (21.6 percent).  Efficiency has been a part of his game since entering the league.  Of 280 players logging at least 500 shots since Draisaitl came into the league in 2014-2015, he ranks fourth in shooting percentage overall (16.0).  He is 2-2-4, plus-2, in eight career games against the Caps.

Draisaitl has six goals in ten games for the Oilers, but that is good only for second on the club, which brings us to the unexpected hot player for the club.  In his first ten seasons in the league, James Neal was one of its most reliably consistent goal scorers.  In ten seasons he topped 20 goals ten times and scored more than 30 twice, including a 40-goal season with the Pittsburgh Penguins in 2011-2012.  However, for whatever reason, he was a commodity with a limited shelf life.  In those first ten seasons of his career, Neal skated for four teams: Dallas, Pittsburgh, Nashville, and Vegas, for which he played when the Golden Knights faced the Caps in the Stanley Cup final in their inaugural season.

Last year, he signed a five-year/$28.75 million contract with the Calgary Flames as an unrestricted free agent and spent the entire season soiling the bed.  In 63 games he posted a career-low seven goals.  Calgary cut their losses last July, exchanging Neal for Edmonton’s Milan Lucic and a third round draft pick in an exchange of disappointing forwards.  The change did Neal good.  He was blanked on the score sheet in his first game as an Oiler, but then he ran off seven goals in his next three games.  Neal has not kept up that blistering pace, but he does have two goals in his last five games to lead the team with nine.  He is 10-5-15, plus-3, in 22 career games against Washington.

Lost in the Oilers’ fast start has been their play in goal.  The starts have been roughly evenly split between Mike Smith (six) and Mikko Koskinen (four), two goaltenders on the far side of 30 years of age with unspectacular careers.  Smith is the better known of the pair, now in his 14th NHL season and his sixth team.  He is 13th among active goaltenders in wins (246), but through Tuesday’s games he was also tied for fourth among active goaltenders in losses (238, with Craig Anderson).  Smith comes to the Oilers on a one-year/$2.o million contract as an unrestricted free agent after spending the last two seasons in Calgary, posting consecutive 20-plus win seasons for the first time in his career.  He is off to a good start with the Oilers, going 3-2-1, 2.15, .925, with one shutout in six starts to date.  Smith is 4-9-2, 3.26, .895, in 16 career appearances against the Caps.

Koskinen has had a far different sort of career than has Smith.  He appeared in four games for the New York Islanders in 2010-2011 but then returned to Europe to play in Finland and the KHL until last season, when he returned to the NHL and appeared in 55 games for the Oilers. He was 25-21-6, 2.93, .906, with four shutouts last season, but his start this season has been more impressive.  In four starts to date, Koskinen is 4-0-0, 2.21, .934.  Koskinen has never appeared against Washington. 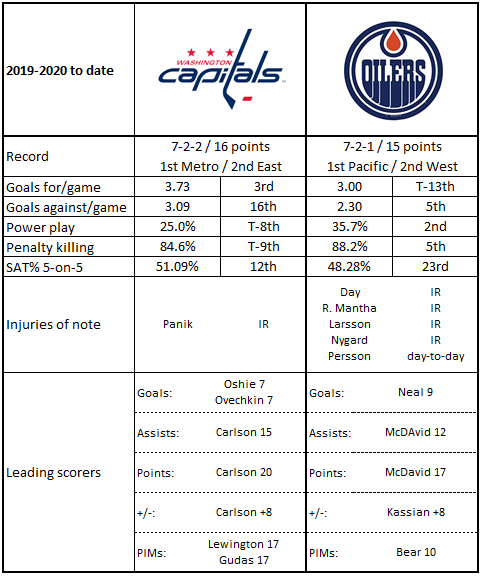 2.  Since that 2006-2007 season, no team has fewer 40-win seasons than the Oilers (two, tied with Vegas, who has only been in the league two years before this season).

5.  The Oilers have a habit of taking their foot off the gas when ahead in one respect.  Their shot attempts-for percentage at 5-on-5 when leading in games (38.14 percent) is worst in the league.

2.  The Caps have five wins in six road games to date, the first time in team history they started the season 5-for-6 on the road.  Last season, they did not get their fifth win on the road until November 19th, at which time they were 5-4-1 in ten road contests.

3.  Alex Ovechkin is tied for the league lead in road goals scored through Tuesday’s games (six, with James Neal).

5.  Second periods have been good for the Caps.  They lead the league in middle period goals scored (18), and only three teams have allowed fewer second period goals than the Caps (six): Buffalo (five), Arizona (four), and Edmonton (four).

The third Oiler with two goals in their recent 2-2-1 skid is defenseman Ethan Bear.  He is in his second season with the club after getting an 18-game look last year (1-3-4, minus-11).  That he would be averaging more than 20 minutes per game (20:50), even at this early stage of the season, is an achievement.  Bear was taken in the fifth round (124th overall) in the 2015 Entry Draft, the 40th of 74 defensemen taken in that draft.  But he is already one of only 20 defensemen in that draft to have appeared in 20 or more NHL games (28).  Odd Ethan Bear Fact… he is the only Oiler defenseman with a game-winning goal so far this season (October 18th in a 2-1 win over Detroit).  Bonus Odd Ethan Bear Fact… The Oilers have points in all five games in which Bear recorded two or more shots on goal (4-0-1).  This will be Bear’s first appearance against the Capitals.

Nick Jensen has now dressed for 31 regular season and seven postseason games with the Capitals.  That is not a lot of games, but for a 29-year old veteran in his fourth NHL season, it is reasonable to expect that the break-in period would be over.  Somehow, though, it does not seem to be with Nick Jensen.  He was not expected to be a prolific offensive defenseman, but he has only two assists in six games this season and is still looking for his first goal as a Capital.  He has been on ice for 12 goals against so far, second-most among defensemen (Dmitry Orlov: 15), 11 of them at even strength, despite averaging 16:23 in even strength ice time (third among Caps defensemen).  The Caps have a shot attempt differential at 5-on-5 of minus-4 with Jensen on the ice, worst on the team among defensemen.

It is frustrating at times to watch, since he does offer glimpses of being effective at moving the puck smartly out of his own end and letting the skill guys take over.  Jensen suffers some in a comparison with Michal Kempny who, like Jensen, was a trading deadline pickup brought on board to provide that puck-moving skill.  The Caps were wildly successful with the Kempny addition, it being what some might think was the last, missing piece in the Stanley Cup puzzle in 2018.  It has not yet been as successful in Jensen’s case, but there are only those 31 regular season and seven postseason games to date on which to judge.  Jensen is 0-1-1, even, in five career games against the Oilers.

Edmonton fans have been a long-suffering lot.  Since going to the Stanley Cup final in 2006-2007, no team having played in one city (with the exception of the third-year Vegas Golden Knights) has fewer regular season wins than the 391 the Oilers have.  And although the Oilers have drafted a lot of high-end talent at the top of a lot of drafts since then, no team has allowed more goals (2,940).  But things are looking up, if only for the moment.  Edmonton is 7-2-1, and perhaps most encouraging, their scoring defense (2.30) is fifth in the league through Tuesday’s games.  When you have the most prolific offensive force in the league (Connor McDavid) and a returning 50-goal scorer (Leon Draisaitl), one can finally see the contours of a more complete, more consistently competitive team that will pose an interesting challenge for the Caps on Thursday night.