“Ah, but I was so much older then
I'm younger than that now.”

Bob Dylan wrote those words in 1964, and they were interpreted as the conflict between what was once accepted as a youth and what was now subject to doubts having grown older.  The protest movement in the mid-1960’s and a hockey team in the twenty-teens do not have a lot in common, but Nicklas Backstrom is at that point in his career when we might ask, “was the certainty we had a few years ago that he would be an elite center misplaced?”

Not that Backstrom had a bad season.  He tied with Jonathan Toews among centers for seventh place in total points, he was one assist behind Sidney Crosby for second in the league among centers, and only two centers – teammate Mike Ribeiro and San Jose’s Joe Thornton – had more power play points than the 18 he recorded.

But back to the regular season.  There was a curious – and unexpected – Backstrom effect at 5-on-5.  Backstrom spent more time skating with Alex Ovechkin and Marcus Johansson at 5-on-5 than he did with any other Capital forwards.  When they were on ice together at 5-on-5, Ovechkin’s GF20 (goals scored by team per 20 minutes of ice time, as defined at stats.hockeyanalysis.com) was 1.002.  When apart, that value was 1.009.  For Johansson, the values were 1.11 when skating with Backstrom, 1.11 when they were apart.

The big difference here came on the defensive side of the ledger.  Ovechkin’s GA20 at 5-on-5 (goals scored against per 20 minutes of ice time) was 0.739 with Backstrom, 1.009 when separated from Backstrom.  For Johansson, the numbers were 0.863 with Backstrom and 1.269 when separated. 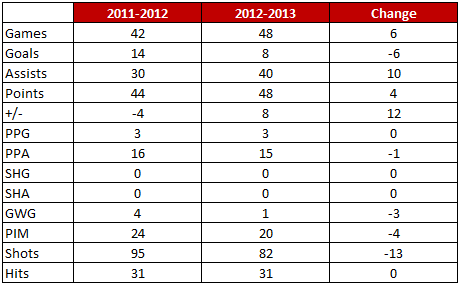 Odd Backstrom Stat… “Tuesday’s child is full of grace.”  For Backstrom, Tuesday certainly graced his statistics.  He was 2-17-19, plus-7 on games played on Tuesdays, 6-23-29, plus-1 on the other six days of the week combined.

Game to Remember… April 2nd vs. Carolina.  The Caps went into their contest against Carolina on April 2nd tied with the Hurricanes for tenth place in the Eastern Conference, three points out of the top-eight and four behind then-division leading Winnipeg.  Carolina got the jump on the visitors with two goals less than three minutes apart in the first period.  Then Backstrom went to work.  He had the primary assist on four straight goals for the Caps in the space of 11:45, allowing Washington to overtake Carolina, 4-3, barely 11 minutes into the second period.  The Caps added a shorthanded goal with 45 seconds left to seal the 5-3 win.  For Backstrom it was quite a night.  It was his first four-point game since February 4, 2001 (a 6-5 Caps win over the New York Rangers), and his 12th career four-point or better game.  It was the third game in what would be a nine-game points streak for Backstrom (1-14-15).

Game to Forget… April 18th vs. Ottawa.  Getting his lowest ice time of the season (15:41), Backstrom was on ice for each of the Senators’ first two goals, then was not on the ice when the Caps, trying to get the equalizer in a 2-1 game, allowed Ottawa an empty net goal with 1:27 left in a 3-1 Washington loss.  Backstrom skated only five shifts in the third period of that game before going out after being hit in the right arm by a Mike Green slap shot.

Post Season… Backstrom had one even-strength point in the first round series against the Rangers, the first goal of the game in what would be a 4-3 Rangers win in Game 3.  Other than that he was scarcely heard from despite getting more ice time among forwards than any Capital except Alex Ovechkin.  It was surprising in that over his last 21 regular season games he was 5-21-26, plus-10.  By the time the series was over, Backstrom found himself 3-for-64 shooting over his last 29 playoff games (4.7 percent) and, perhaps more distressingly, only ten assists in those 29 games, only five of them at even strength.

Alex Ovechkin might be what gives the drink its kick, but Backstrom is the straw that stirs it.  And in terms of his post-season contributions, it has been a somewhat watered down cocktail in the last three years.  His position affords him more opportunities to contribute (scoring on his own, distributing the puck to more than just Alex Ovechkin), but by the same token, if he does not cash in on those opportunities the Caps are not likely to be successful.  In the last 14 post season games in which Backstrom did not register a point, the Caps are 3-11 dating back to the four-game sweep at the hands of Tampa Bay in 2011.

As much as is the case with Ovechkin, Backstrom is at the point in his career where he will be evaluated on his post-season performance more than what he accomplishes in the regular season.  The dropoff from his early career success in the post season (12-18-30 in his first 28 games covering three post-season appearances) is mystifying.  And until that mystery is solved, the disappointment that was Washington’s in the post-season in 2013 is not likely to change.

Posted by The Peerless at 1:17 AM No comments: